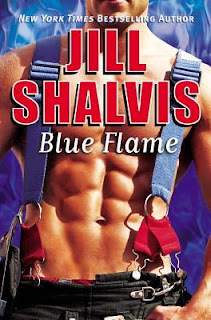 IF YOU CAN’T HANDLE THE HEAT . . .Callie
Hayes is the hardworking manager of the Blue Flame, Arizona’s most
remote, relaxing guest ranch. She’s given everything to the ranch, body,
heart, and soul-three things that go haywire when her sexy employer
suddenly shows up. Their intense, stormy past has taught Callie to never
mix business with pleasure. But something about Jake is different now .
. .

San Diego firefighter Jake Rawlings knows the ranch he
inherited from his father is safe in Callie’s capable hands. After being
injured in a high-profile rescue, Jake decides to recover in solitude
at the Blue Flame. He may have left the fires behind, but he hasn’t
escaped the heat; Callie is just as hot and irresistible as he
remembers. Now coming home doesn’t seem like the best idea-as the sparks
between Jake and Callie threaten to burn out of control . . .

This is the second story for Firefighter Friday and the final one before my September 11th rememberance blog will be Seeing Red.  As with White Heat, I was disappointed that this was not available last summer.  I was excited to hear that it was coming to Kindle since I can’t read print books anymore.   I am a huge fan of Jill Shalvis, so I plan to finish reading all of her books at some point.


This story was different than any other stories I have read by Jill Shalvis but it was still good.  While it was difficult for me to get interested in it, I was able to finish it.  It may have been my schedule though for the reason that I could get interested in it.


I had more of a connection with Amy and Tucker than I did with Jake and Callie.