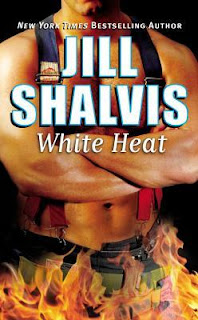 Nothing is hotter than desire . . . Raised
as an army brat, bush pilot Lyndie Anderson has always been
independent-and alone. Living only for her plane and the open sky, she
eagerly rushes to help save the people of a small Mexican town from a
raging wildfire. Yet when her cargo is a drop-dead gorgeous fireman,
Lyndie suddenly feels a burning desire-one that may ground her for the
first time in her life.

Firefighter Griffin Moore has been
haunted by the loss of his crew in an Idaho inferno. Scarred by
survivor’s guilt, he became a recluse who hid himself away from
working-or being close to anyone. But when his brother convinces him to
volunteer for another fire, he encounters a brave, beautiful woman who
sparks a simmering passion. Now in the hot, dangerous conflagration of
the Mexican jungle, Griffin and Lyndie must discover a way to rescue a
town-and a love that may save them . . .

I have decided to do Firefighter Fridays on my blog leading up to the anniversary of September 11th, 2001.  Why?  Other than the fact that I think Firefighters are one of the bravest professions, second to the United States Military, I think the stories are amazing.  I have read some fantastic firefighter romances and thought I would share them.


I am a huge fan of Jill Shalvis and when I could not find this story last summer I was disappointed because I can no longer read print books.  So imagine my surprise when I am playing on Amazon one night and find out that this story was coming to Kindle edition.  Blue Flame and Seeing Red were also going to be joining the Kindle edition.  It took me a while to actually read it because I wanted to wait until all three were release or close to being released.  This is a re-release of a story that Jill Shalvis published in 2004.  I wasn’t even aware of who she was until last year, so everything is new to me.


Yet again, I am intrigued by characters created by Jill Shalvis.  Griffin, is the typical brooding, stubborn man that you just want to love.  I think he is one of the few heroes that I actually didn’t want to smack at any point.  Though when the kitty entered the picture, he made me swoon!!!   A man that is good to animals is a winner!  Lyndie is that tough, strong heroine that I love reading.  Her strength and her determination made me like her character instantly.  Although, there were a couple times that I wanted to smack the hell out of her!!

Watching these two work together and fight their attraction was a great way to spend a Sunday afternoon.  There were so many characters in this story that I thought were great assets to the story.  I do enjoy that this story was wrapped up and didn’t need to go on to another book to get answers about other characters.