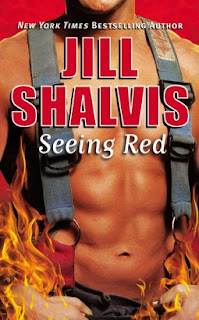 IT ONLY TAKES A SPARK
Summer
Abrams left everything behind-the warehouse fire that took her father’s
life, the town where her world fell apart, and her best friend in the
world, Joe Walker. All she carried with her was guilt. Now, twelve years
later, another fire has devastated the same warehouse, and Summer
returns to Ocean Beach to search for answers. But what she finds first
is an old flame that never went out.

Joe Walker has become
the town fire marshal-sexy, strong, and an expert at keeping people at
bay. The only person he ever let into his heart broke it and left town
without a word. Now that she’s back, Joe swears he won’t fall for Summer
again . . . but the heat between them is irresistible. As he tries to
help her heal the past, can he take a risk on building a future with
Summer?

Sarah’s Review:
As with “White Heat” and “Blue Flame”, I was disappointed last summer when I didn’t see an e-version.  I am glad that there finally is one!   Of the three, this one is my favorite.  This story had the perfect amount of romance and suspense!!


Summer and Joe had a strong friendship that was put on the back burner after a major fire.  When Summer and Joe reunite, it is at the scene that of the major fire that caused their separation.  Watching the two of these characters reconnect, get to know the adult versions of themselves and watching all the suspicious activity going on left me wanting more and I read this in one day, without stopping for meals.


When a third fire starts in a different location connected to Summer, Joe begins to question whether the first two fires were accidental.  When Summer becomes suspicious as well, the story gained even more interest.  I had to know who was involved and was slightly shocked about who it was.