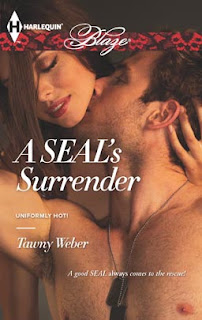 A SEALs Surrender
Tawny Weber
Subject: Lieutenant Commander Cade Sullivan
Status: On leave
Mission: He’s home to take care of some family business.
Obstacle: Eden Gillespie. The girl who always lands in trouble…has
landed in his bed!
Lieutenant
Commander Cade Sullivan is the job. His commitment to the Navy SEALs is
absolute—almost. Worse still, he’s been summoned home, where his family is the
town royalty and women vie to be one of Cade’s conquests. One of them in
particular….
Ever
since they were kids, Cade has been rescuing Eden Gillespie. Now she’s decided
she owes him one heck of a thank-you—one that involves a bed, naked bodies and
sweet satisfaction. But when their sexy trysts are discovered, Eden becomes a
bit of a town sensation—and not in a good way. Can she convince her SEAL to
risk one last rescue operation?
We are slightly introduced to Cade Sullivan in the first
story of this set A SEALs Seduction –reviewed last week– but we now get more
information on his life in this one.
Adrianna’s Review:
I personally enjoyed this story more than the first one, one
of the facts that Cade and Eden have a bit of a history. Eden has always had a
thing for Cade, but not only is he older than she is, but he’s always seen her
as the girl next door that he needs to save. Little does she know that after
Cade accidentally saw her naked –one of the many times he rescued her– he’s
seen her as more than just the girl he always rescues.
The chemistry between these characters is amazing. The
strength of Eden and her outlook on so many things that have happened in life
is amazing. Where most others would just fold and give up, Eden, just looks for
a solution to her problems. She’s definitely a fighter.
Cade has issues with his family, being back in the town where
he grew up and his feelings for Eden. For a man who is always so in charge his
insecurity and indecision at the beginning can be a bit of a frustration. The
great thing about Cade though is his concern for his grandmother and Eden’s
situation is so enduring.
At the end of it all, the changes and growth that both the
characters make, really is all that you need to love this story.
Happy Reading.

Thanks
Adrianna for doing another guest review for me!  You have been a tremendous
support with this blog and and a great friend!!  You have definitely made me want to read these two stories!