By: Barbara Witek
Genre: Military Romance
SYNOPSIS:
A soldier running from his past and a young woman denying herself
a future become caregivers of a beautiful baby girl and find their true destiny
as a family.
Army Ranger Max Hamilton has returned to Destiny Falls after the
sudden death of his brother. Only coming home means more than trying to save
the family farm. Coming home means facing the demons he left behind, and
allowing himself to love again.
After her twin sisters’ death, suburban veterinarian, Chelsea
Stevens understands that raising her niece is the only chance for a child she
will ever have. Fulfilling her sister’s final wish is more than just moving her
career…it’s risking her heart.
Can their shared love of a child be the common ground these
wounded souls need to trust and find love for keeps? 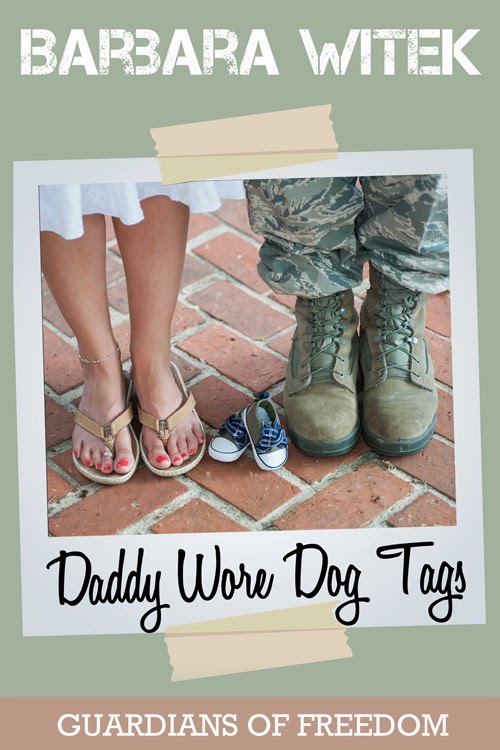 Amazon http://amzn.com/B00KHB72M6
Goodreads: https://www.goodreads.com/book/show/22355875-daddy-wore-dog-tags?from_search=true
EXCERPT:
“Chelsea…”
She turned her head and caught the concerned look on his
face lit by moonlight. She worried that he misunderstood and that she sounded
desperate for the love of a man.
“I didn’t mean to imply that—” She tried to correct what her
heart had forced her to say when Max shifted her to his lap and kissed her. The
unexpected move took her by surprise but then she let herself go. His lips
melted into hers in a kiss she felt to her very soul.
“God, I’ve wanted to do that for weeks,” he said as
breathless as she was when they broke apart.
“You did?” She smiled when he placed a softer kiss on her
cheek and then her neck. “Why did you wait so long?”
“If I knew you tasted so sweet, I wouldn’t have.” This time
she made him smile when she pulled him down and kissed him back. “That night at
your house I had all I could do to keep myself on your couch.”
“Really? I’d had two glasses of wine and I’m afraid they
made me bolder than I ever would have been.”
“I like you bold. You were a total turn on,” he said between
kisses.
“I like this,” she said and traced her fingers along his
jaw. “I’ve never met a man like you, Max Hamilton. You’re so edgy, yet there’s
this soft, gentle side.”
“Don’t let that get around.”
“No, I’m serious. I’ve seen you with Bella. She adores you
and you definitely have a way with her. I think you’d be a wonderful father.”
“You think so, huh?” Chelsea felt the chuckle vibrate
through his chest. “Being a parent isn’t as easy as I thought, that’s for
sure.”
“I agree. I couldn’t do this alone.”
“I’m sure you could.” His voice took on a serious tone that
she chose to ignore.
“Maybe, but it’s much easier with you. I’m thankful that
you’re here.” He closed his eyes and stiffened, making Chelsea regret the
words. The kisses they’d shared were wonderful and if he’d been thinking
anything close to what she had, then she needed him to know they could have a
chance.
“You know I can’t stay, right? I still have a job to do and
soon I’ll be leaving to do it.” He opened his eyes and forced her to look at
him. “I can’t be your white-picket-fence, Chelsea.”
“I know.” She wanted to scream and ask why not, but she
swallowed the question as his arms tightened around her, pulling her close
until their lips were almost touching.
“No, you don’t know. I can’t promise you a future but I can
damn well be your here and now if you want me.”
“Yes, Max. Yes I want you.” More than he would ever know.
AUTHOR INFO:
Barbara Witek
I live in upstate New York with my very own alpha-male and a
loveable Labrador who thinks he’s the fourth child! Proud mom of an Army ROTC
cadet, a soon to be college freshman and a teenage daughter who’s involved in
everything, there’s never a dull moment in our busy household.
I’m a firm believer in love at first sight, second chances and
creating your own destiny. Isn’t that what romance is all about? Being a
hopeless romantic helps me write my touching, emotional and heartfelt romances.
I also write Gossip Girl fan-fiction under the name Kyra Steele.
You can find Kyra through Amazon’s Kindle Worlds.
When I’m not writing, I enjoy a good glass of wine and getting
lost in a book. I also love cross-country skiing and ice-skating (although I
admit to not having done either in years!) hiking, anything crafty, and
competitive family game nights (scrabble of course)!
AUTHOR LINKS
Facebook: www.facebook.com/barbarawitek.author
Street Team (Barbie’s
Barracks): https://www.facebook.com/groups/316424308509580/
Twitter: @barbarawitek
Pinterest: NYBarbie84
Instagram: NYBarbie84
GIVEAWAY:
Rafflecopter:

Sarah’s Review:
Thank you to Wanderlust Book Tours for reaching out for a promo for this story and then reaching out to the author when I wanted to review it.  I was instantly drawn in by the title then after reading the blurb, I knew I wanted to read this book.  Boy, am I glad I did!  I love the military romances almost as much as I love romance in general.  I don’t get to read as many military romances as I would like, but when they come in, I pounce. Since this is a short romance, it will be difficult not to give anything away, but I will try.

When Max and Chelsea experience the death of their siblings, little do either know that sweet baby Bella that lost both of her parents will be something that neither one of them saw coming.

Max is furious when he finds out about having a niece that he knew nothing about and thinks that Chelsea is only after the family farm.  What Max doesn’t realize is that Chelsea is following her deceased sister’s wishes.   Talk about fireworks and jumping to conclusions, boy, Max was a pro at that.  When he realizes just how wrong he was, he doesn’t know what hit him.

Chelsea knew that she would be raising her niece after her sister’s death and much to her parents arguments against it, she and Bella relocate to be near Bella’s other side of the family.  Chelsea get the surprise of her life when she meets Max and he ends up being hateful towards her and Bella.  That is until the meeting with the lawyer to discuss Nathan and Val’s final wishes for their daughter.

What happens after that meeting changes everyone involved but the path isn’t easy for them.