PROMO & GIVEAWAY: Weak at the Knees by Jo Kessel

Weak
at the Knees 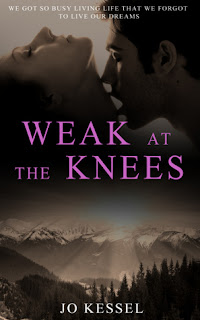 “We got so busy living
life that we forgot to live our dreams.”

Danni Lewis
has been playing it safe for twenty-six years, but her sheltered existence is
making her feel old ahead of time. When a sudden death plunges her into a
spiral of grief, she throws caution to the wind and runs away to France in
search of a new beginning.

The moment
ski instructor Olivier du Pape enters her shattered world she falls hard, in
more ways than one.

Their
mutual desire is as powerful and seductive as the mountains around them. His
dark gypsy looks and piercing blue eyes are irresistible.

Only she
must resist, because he has a wife – and she’d made a pact to never get
involved with a married man.

But how do
you choose between keeping your word and being true to your soul?

Weak at the Knees is Jo’s debut
novel in the new adult, contemporary romance genre – a story about love, loss
and relationships, set between London and the heart of the French Alps.
Buy Links:
US: http://www.amazon.com/dp/B00E4VC70W
UK: http://www.amazon.co.uk/dp/B00E4VC70W
Goodreads Link: http://www.goodreads.com/book/show/18195781-weak-at-the-knees
Author Info
Jo Kessel
is a journalist, working for the BBC and reporting and presenting for ITV on
holiday, consumer and current affairs programs. She writes for several national
newspapers in the UK including the Daily Mail, the Telegraph, the Guardian and
the Express and was the anonymous author of the Independent’s hit column: Diary
of a Primary School Mum.
When Jo was
ten years old she wrote a short story about losing a loved one. Her mother and
big sister were so moved by the tale that it made them cry. Having reduced them
to tears she vowed that the next time she wrote a story it would make them
smile instead. Happily she succeeded and with this success grew an addiction
for wanting to reach out and touch people with words. Jo lives in London with
her husband and three children. She loves traveling and since becoming a mother
anything even remotely sad makes her cry. She’s a sucker for a good romance and
tearjerker movies are the worst. She’s that woman in the cinema, struggling to
muffle audible wails as everyone else turns round to stare.
Author Links
Goodreads:
http://www.goodreads.com/book/show/18195781-weak-at-the-knees
Website: http://www.jokessel.com/
Blog: http://www.jokessel.blogspot.co.uk/
Facebook: https://www.facebook.com/kesseljo
@jo_kessel
(Don’t forget the Giveaway- See
Below)

Rafflecopter Giveaway
(Gift Basket including: a signed book, a signed bookmark, a giant pen from the
Wimbledon Tennis Championships, and several French goodies featured in Weak at
the Knees including a French manicure kit, an Edith Piaf CD (one of France’s
greatest international singers), personalized merchandise from Montgenevre, the
village in the French Alps where Weak at the Knees is set, as well as  a
bottle of Chateauneuf-du-Pape – a gloriously rich (and expensive) red wine
produced in the Rhone wine region in southeastern France. It is a wine that
should be drunk to celebrate a special occasion.