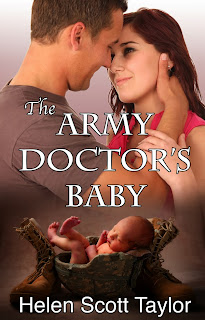 After his
wife betrayed him, Major Radley Knight dedicated himself to becoming the best
Army doctor he could be, dedicated himself to saving soldiers’ lives. When he
returns on leave from Afghanistan he is ready for a break. Instead he finds
himself helping a young mother and her newborn baby. He falls in love with
Olivia and her sweet baby boy and longs to spend the rest of his life caring
for them. But Olivia and her baby belong to Radley’s brother. 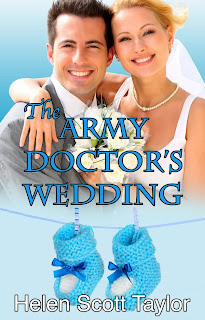 Army
doctor, Major Cameron Knight, thrives on the danger of front-line Battlefield
medicine. Throwing himself into saving the lives of injured servicemen keeps
the demons from his past away. When he rescues charity worker, Alice Conway,
and a tiny newborn baby, he longs for a second chance to do the right thing,
even if it means marrying a woman he barely knows so they can take the orphan
baby to England for surgery. The brave, beautiful young woman and the orphan
baby steal his heart. He longs to make the marriage real, but being married to
an army officer might do her more harm than good. 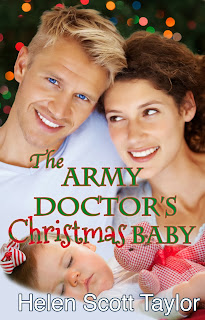 After he
loses his wife, army surgeon Colonel Sean Fabian protects his damaged heart by
cutting women out of his life. He dedicates himself to his career and being a
great dad to his twin babies. When he asks army nurse Kelly Grace to play nanny
to his children over Christmas, he realizes how much he misses having a
beautiful woman in his life and in his arms. Caring for Sean’s adorable twin
babies is Kelly’s dream come true. She falls in love with the sweet little
girls and their daddy, but she’s hiding a devastating event from the past. If
she can’t trust Sean with her secret, how can she ever expect him to trust her
with his bruised heart? 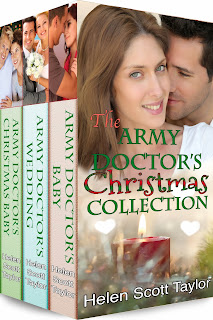 Author Info
Helen Scott
Taylor’s first novel, The Magic Knot, won the American Title contest in 2008,
was a Golden Heart® finalist, and was chosen as one of Booklist’s top ten
romances of 2009. Since then, she has published other novels, novellas, and
short stories in both the UK and USA.

Her published works have been finalists in a number of contests including the
Holt Medallion, the Lories, the Prism Contest, the Write Touch Award and the
Maggies.

Helen lives in South West England near Plymouth in Devon between the windswept
expanse of Dartmoor and the rocky Atlantic coast. As well as her wonderful
long-suffering husband, she shares her home with a burmilla cat, an elderly
shih tzu, and her new baby–a cute westie cross Bichon.

Thanks to Tasty Book Tours and Helen Scott Taylor for the opportunity to read these great stories.  I read and reviewed the first one here, so this will have my review of books two and three.

The Army Doctor’s Wedding Review:  Let me just say that after the first book, I was not a fan of Cameron, our hero in this one.  I did tell the author this in messages, but she assured me that he would have his story.   Well, I have to retract my opinion of him in this one.


Cam and Alice became a couple that I was rooting for right from the beginning.  With the time jump that occurred between book 1 and this one, you could see how much Cam had grown.  He truly did gain the respect that I didn’t want to give him in the first one.

I enjoyed seeing how Ms. Taylor gave Kelly and Dr. Fabian, the hot shot plastic surgeon Army doctor we met previously!  Both of these characters had to overcome heart break to get their happy ending.   I cried more reading this one than I did the other two.

I truly enjoyed this series and if Ms. Taylor ever gets it in print, I want a singed copy!!