PROMO & REVIEW: When I Find You by Dixie Lee Brown

When
I Find You
A
Trust No One Novel
By: Dixie Lee Brown
Avon Romance
Releasing July 16th, 2013
Blurb
Dixie Lee
Brown continues her heart-racing Trust No One series with a sexy veteran
determined to protect an innocent woman on the run.
As a former
Marine, Walker could find a needle in a haystack. But when he’s asked by the
U.S. Marshals to track down a nanny fleeing from the mafia, he’s sure she’ll be
more trouble than she’s worth. Especially after the sexy little thing clubs him
and leaves him for dead. Walker’s stunned by her courage—and her curves—and
can’t help feeling drawn to this damsel trying to dig her way out of distress.
He’ll find her, and when he does, it’ll take more than the mafia to tear him
away.
Darcy
Maddox never expected to be running for her life. But when it suddenly looks
like foe may become friend, Darcy’s faced with a choice: Go it alone or trust a
man she just met—never mind the way his touch gets her heart pounding. The
choice seems simple enough until she realizes it’s not just her life at
stake—it’s her heart.
Link to Follow the Tour: http://tastybooktours.blogspot.com/2013/06/now-booking-tasty-virtual-book-tour-for_28.html
Buy Links
Amazon: http://www.amazon.com/When-Find-You-Trust-ebook/dp/B00CD360NI
B&N: http://www.barnesandnoble.com/w/when-i-find-you-dixie-lee-brown/1115122810?ean=9780062273888
iTunes: https://itunes.apple.com/us/book/when-i-find-you/id636322973?mt=11
Author Info
DIXIE LEE
BROWN started writing romantic suspense nearly twenty years ago. Then life took
a few unexpected turns, and the writing career was put on hold in favor of
starting a new life and a new job. One’s passion is not easily forgotten,
however. Two years ago, Dixie started writing again-a YA novel-but, before she
could finish, another idea pushed to the forefront and wouldn’t go away until a
full-fledged novel was completed.

That idea became All or Nothing, the first book in the Trust No One series. All
or Nothing placed third in the 2011 TARA Contest (Tampa Area Romance Authors)
in the romantic suspense category.

Dixie now lives in sunny Central Oregon with two small dogs and a cat for
company while she writes the third book of the Trust No One series. When she’s
not writing, she enjoys reading, movies and trips to the beach. 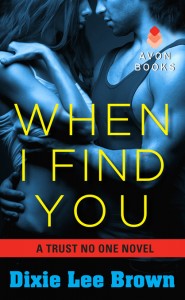 The sharp crack of a gunshot echoed through the silence. Darcy
jerked upright in bed, the troubled thoughts keeping her from sleep suddenly
forgotten. Her breath caught in her throat as she froze, staring into the
darkness, listening. She had to be wrong. It couldn’t be gunfire. The slamming
of a cupboard door maybe or a car backfiring on the street at the end of the
drive. That was all. She released her pent-up breath and forced herself to
relax while easing the tension from her neck, her spine, her stomach…except,
apparently there was no help for the ball of dread that knotted her stomach.
She shook her head. Since when had she become so paranoid? Her imagination was
really working overtime tonight.
The next shot shattered the rosy image she’d conjured and
propelled her from the bed to the door, her hands braced against it as though
she were strong enough to barricade herself from the evil that lurked outside.
She lost track of time. Seconds blurred into minutes as she
waited. No voices. No doors opening or closing. Not even the creak of a
floorboard. Nothing. She opened her door a crack and held her breath. The
gunfire had come from downstairs, but the only sound now was the tick, tick,
tick of the grandfather clock in the hallway outside her room. A ribbon of
light revealed the top few steps leading to the lower level. Her heart drummed
wildly in her ears, and she forced air into her lungs and let it out,
fortifying herself against the lightheadedness that made her legs weak and
shaky.
She couldn’t stay here hiding. She had to do something—but what?
Go downstairs? Johnny and she were the only ones in the house, at least the
only ones who were supposed to be here. What if he was hurt? He might need
help, but whoever fired those shots could still be down there. The police? It
would take them forever to get here. She leaned her forehead against the cool
wooden door, squeezed her eyes shut and fought the indecision and terror that
immobilized her.
Darcy had known there was something wrong this morning as she’d
watched the two young boys she cared for follow their mother to the cab parked
out front. Any other day, she’d have been helping them get ready for school.
After they left, the threat still hung in the empty hallways and deserted
grounds, and the silence that descended over the house tonight practically
shouted a warning.
She’d bet anything her employer, Johnny Fontana, knew there was
something wrong too. Why else would he have given the entire household staff a
three-day weekend and sent his wife and sons to visit family in California?
He’d wanted Darcy to leave today too and even insisted on paying her expenses
to visit her parents in Oregon.
The thought of seeing her father filled her with dread, so she’d
used a doctor’s appointment as an excuse to delay her departure. She couldn’t
explain to Johnny how one sad smile from her father reawakened all the pain and
guilt and reminded her in vivid detail why she’d left Oregon in the first
place. She loved her father and missed her mother terribly, but there was too
much left unsaid between them. Johnny wasn’t completely satisfied with the
compromise she’d offered but eventually gave in, and Darcy had made
arrangements to leave tomorrow afternoon to visit a friend from college.
Now, the stillness settled around her and a feeling of impending
doom sucked the air from her lungs. A grimace twisted her lips. Clearly Johnny
had a very good reason for insisting she go. Perhaps it wouldn’t have hurt to
be a little more flexible.
She should have known something like this would happen when she
decided to stay and work for Johnny, even after she learned who he was. What
rational person takes a job as nanny to a gangster’s sons anyway? Her father
didn’t have any trouble deciding the extent of her foolishness from clear
across the country, and he didn’t hesitate to tell her what she should do. Pack
her bags and get out. Was that why she stayed? To prove to her father she could
take care of herself? Clearly not the wisest decision she’d ever made.
Her head snapped up. Voices floated to her ears as heavy footsteps
ascended the stairs. She caught a few words—girl…take her out…upstairs—and
her heartbeat picked up another notch.

I want to thank Lisa at Tasty Tours for giving me the chance to promote this story and made sure I was able to get an ARC of this story.  Dixie Lee Brown is a “new to me” author and I love finding new authors.

Romantic Suspense is a newer genre for me, but it is quickly becoming a favorite of mine.  From the first chapter of this story, I was hooked.  I have been so busy with school that I haven’t been able to read a full length story but this one I read in two days.  The only reason that I didn’t finish it in one day was because I started it later in the evening and I couldn’t stay up all night to finish it.


Darcy is a nanny for a mobster and when a hit on her boss happens, Darcy is in the house.  When she hears the gunman say “Get the girl” she runs for her life.  Little does she know that she puts herself in danger unknowingly and has a hard time trusting a stranger that she comes across when she is running for her life.


Walker is called in by his friend,  Joe after the U.S. Marshall’s want to find the nanny.  When Darcy makes Walker at the airport, he realizes that he made a huge mistake and unknowingly put her life in danger by spooking her.  Fortunately, Walker used his best judgement and followed them.


Finally, Walker is able to convince Darcy that she is safe with him and the fun begins.  The true test of whether Darcy can trust Walker begins.  Watching the two of them build trust with each other and figure out who the real bad guy was exciting.  Watching the two of them fall in love was amazing.  I loved watching Darcy knock Walter on his figurative @$$!  I do love when the hero thinks that he doesn’t need or deserve the love of a good woman but then realizes how stupid he is.

Great story Ms. Brown.  I will be reading All or Nothing very soon!