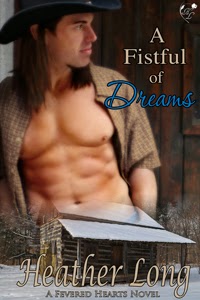 A Fistful of Dreams
Fevered Hearts #4

When the spirit fever struck a town, a village or an outpost,
it left few if any survivors. The white man blamed the Indian saying
they used their mojo on them.  The Indians blamed the white man for
angering the spirits.  The survivors knew it didn’t matter.  The Fevered
were forever changed.

Rebuilding Dorado is only the first challenge…

Surviving a vicious attack by their enemies and an outbreak of the
Fever has left Dorado in ruins and the Flying K under siege, now all
their resources are devoted to rebuilding their town and protecting the
newborn Fevered in their midst.  Buck Morning Star and his siblings
divide their time between training their new family members and avoiding
the threat of detection the arrival of soldiers constructing a new fort
pose, but the spirit walker’s dreams are haunted by Delilah. But when
Jason Kane threatens to come between them, Buck’s obsession may drive
him to madness.

Her secrets could destroy them all…

Rescued from a whore house in Fort Courage, Delilah Rinaldi never
expected to find a sanctuary populated by Fevered and their allies.
Silent since her arrival at the ranch, she longs to believe in Buck and
the passionate dreams they share. But she keeps dangerous knowledge of
the enemy hunting them all close to her heart—information Jason may
reveal and cost her the only home and man she loves.

Primitive, primal and provocative, their struggle is intensely personal…

Close contact arouses a soul-stirring passion and love. But it may
not be enough to sustain a relationship forbidden by their power and the
tempest it can unleash.

His dream. Her words. Their destiny.

A Fistful of Dreams is the fourth book in the Fevered Heart
Series, and as many of you know a series I’ve come to love.
In the wake of the devastation caused by the Spirit Fever to
the city of Dorado and the Flying K, the Kane’s and Morning Stars are having to
help the children left behind cope with their new abilities. Not all the
abilities in all the children have been identified and they are having to also
help these children deal with losing everyone they ever loved.
While all this is going on Buck begins to visit Delilah, the
quiet, scared woman who Kid saved from a whore house in Cody’s book. Buck has
been captivated with the shy woman, what is that can keeps her so quiet? She has
spent every day during rebuild at his side letting him speak to her without
saying a word in return. But there is a problem, Jason Kane seems to be just as
interested in Delilah and Buck really doesn’t like that.
Delilah has a secret of her own, she has an ability, which she
inadvertently uses against Buck. Though she thought she was safe to use her
ability in her dreams, so in a way it is Buck’s fault for the use of the
ability against him.
What is her ability? Well because I want you to buy the book
and read it for yourself I will keep that little bit of information to myself.
But trust me when I say it explains A LOT.
We also find out a bit more about Adam and who he is during
this book. Not only had Delilah been associated with Adam in the past, but
Jason was also in her past.  It seems
that Kid wasn’t the first Kane to save her from the situation she was in with
Adam. The man had been making Delilah use her ability for his benefit, which
Jason explains isn’t always in an honorable way.
Where so much is
answered throughout the series, we are getting just as many questions as well.
And as always the end of one book leaves you itching for the next.
My next review for the Fevered Heart Series is to come soon…