Words are funny things.
Their meaning, the pictures they paint in the minds of those that hear them: they’re not always the same and to me at least, that makes them meaningless.
Take for instance the phrase ‘black widow’. Those words conjure the image of a spider, an eight-legged creature with the red imprint of an hourglass on its abdomen.
However, instead of speaking of an arachnid, of the resident of a spindly and dew-laden web, the people who whisper those words are talking about something much different.
They’re talking about me.
From what I’m told, I’m called the Black Widow because no man I’ve ever loved has survived.
Yet, I have no memory of any of it.
My new home leads me to the definition of another vague and meaningless word.
It’s a place where I’m supposed to seek refuge.
A place of retreat and security.
It’s a place where I’m supposed to be kept safe because I’m sick.
But the definition for this place is wrong and the word becomes meaningless when you’re tucked away and made silent by drugs and pretty white jackets.
My name is Alexandra Sutton and this is the story of what happened when I was imprisoned inside an Asylum. 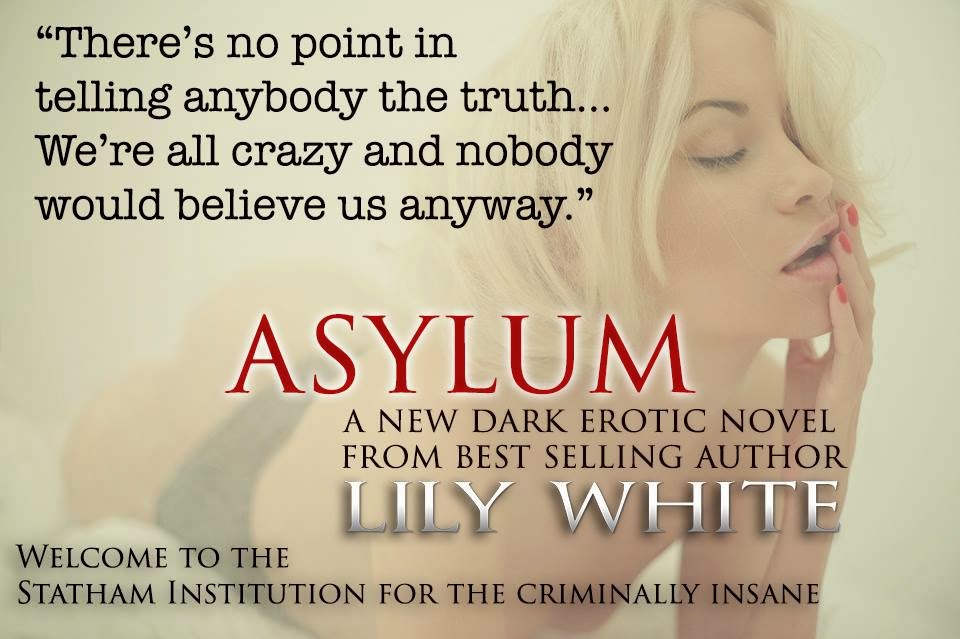 My Review
To say that I loved this book would be an understatement. I have read everything that Lily has written and I have to say this, by far, is the best I’ve seen from her. It has every element we have come to love about Lily, dark, twisted, demented with twists and turns that will have you shaking your head asking yourself, “What did I just read?!?!””  I had several of those moments myself.
I read this book in one sitting because I could not put it down. You get drawn in from the very beginning and you need to see what happens with these characters. The book is well researched, well written and a total mind fuck to the 1000th degree. There is no way to figure out just what is going on until the very end. Lily is certainly NOT predictable. It’s like reading American Horror Story if AHS was on HBO and written by Lily White, which I don’t think is a bad idea.
A 5 star MUST read for every lover of dark psychological erotica.

I couldn’t contain my anger. “I didn’t kill anybody! I don’t even know who those men are…”

“Do not raise your voice with me, Ms. Sutton. I’ve allowed your quirks in behavior thus far, but I’m growing tired of your insubordination. While under my care you will learn to control your outbursts or else you will be restrained both physically and chemically, if necessary.”

“Through drugs, you mean. You’ll dope me up to a point where I can’t fight back.”

“If that’s what I must do. Like I’ve said, I don’t prefer that type of restraint, but in certain cases, it can’t be avoided.”

Standing from his chair, he rounded the desk to stand in front of me. I craned my neck to look up at him, my muscles tightening painfully with anger and the refusal to believe that I’d done any of the things of which I’d been accused. It wasn’t until he was close enough to touch me that the notes of his cologne wafted beneath my nose – something haunting and exotic, masculine and earthy. I shivered at the smell, looking away from him and grasping my hands together in my lap to the point where my short fingernails dug into my skin.

I did as I was told because there was no point in fighting back. A slow roll of recognition penetrated my thoughts, the abysmal circumstances of this place, the futility and harrowing truth that I was under their control. Any hint of rebellion and I would be dosed into compliance, drooling on myself while nodding my approval of whatever horrible thing they had planned. They stripped you of your strength, your voice, your entire being, and replaced it with the structure implicit to an institution for the insane.

“You are my patient and as such, you are under my control and also my protection. I will not hurt you in any way. My only job is to help you. However, any rebellion on your part will be met with equal force. Do you understand?”

“Yes sir.” I spit out the words, angry that I was answering to a man I didn’t even know. 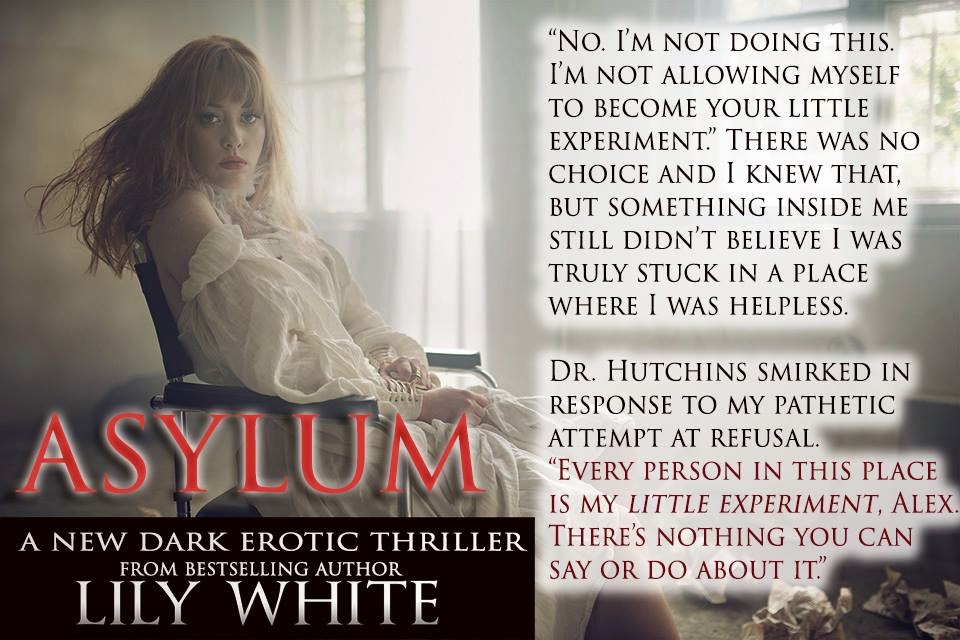 Lily White is a dark writer who likes to dabble on the taboo side of eroticism. Most of the time she can be found wandering around aimlessly while her mind is stuck in some twisted power play between two characters in her head. You may recognize her in public by the confused expression, random mumbling, and occasional giggle while thinking up a scene. Lily’s favorite things in life are reading, thinking about reading, buying books for reading….and writing. Her other secret pleasure is meeting with her plot editor in public to discuss her books and watching the shocked expressions of the people around her that don’t realize she’s talking about a book. When Lily is not reading, writing, wandering or freaking out innocent bystanders, she’s sleeping.