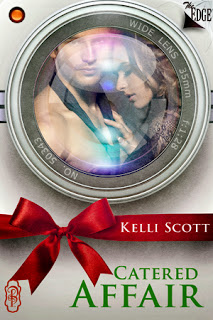 When you mix a fresh picked coupling…

Caterers Chantal and Monty have been hired to handle Layton Industries’
annual Christmas party held at the couple’s penthouse apartment. With
big dreams and very little money, they’re living on love. When their
hosts don’t make it home for the party, a heady serving of desire
distracts the freshly engaged pair during the post-party cleanup…

With a freeze-dried relationship…

Steve and Alexa Layton find it difficult to connect anymore. They’ve
spent so much energy and time on achieving financial security, they’ve
forgotten what it feels like to be young and in love. When their flight
is grounded during a snowstorm, it brings their disconnect to a boil…

Toss in a little spice…

When Steve and Alexa catch their caterers’ after party romp via their
online security camera, will it be the ingredient they need to repair
their marriage?


…and this catered affair is one they’ll never forget.

“He pushed a button. An image of their living room, the gas
fireplace ablaze for holiday ambiance, replaced the elevator scene. The
giant Noble fir by the picture window, decorated with gold balls and
matching bows, lit with white lights. Very elegant. So classy and
stylish. Terribly boring. Nothing like his childhood holidays with
handmade ornaments and blinking multi-colored lights. Tasteless, Alexa
had said. He surrendered to her on all things decoration-related.
Furniture, art, window treatments. Hell, she even picked out his clothes
so he wouldn’t come off looking on the outside like the nerd he was on
the inside.

All fell into her field of expertise. She’d created visual magic
even when they’d been penniless newlyweds. Back when she still smiled at
him, laughed with him, and talked to him.

People mulled around their apartment, chatting, mingling, and nibbling on catered food in their absence.

“The food looks magnificent,” she said.

Better than what they’d likely get in the hotel restaurant. “A good time will no doubt be had by all. With or without us.”

“I feel like a voyeur.” Her voice jingled with giddiness.

He shrugged and clicked to their master bedroom. “Our place. Our party.”

Dan Schnelling from sales had his tongue down the throat of an
administrative assistant as they rolled across the king-size bed. One of
Dan’s hands snaked up the gal’s blouse, the other up her skirt. Knowing
Dan, if he had a third hand, it would be in his own pants. The guy was a
womanizer and hedonist. Deep inside, Steve sort of envied him his
debauchery while simultaneously condemning his actions and his constant
bragging about his conquests. Steve never regretted committing to one
woman. Alexa. If he had it all to do over, he’d marry her again, but doubted she’d sign on if given the choice.

“Ew!” Her face puckered up in disgust as the couple grappled and groped in their private space.

Whipping out his electro-gadget-thingamajig, as she called it, he
scrolled to Dan’s number and cleared his throat. “Hey, Dan,” he said
when Dan found his buzzing phone under the woman’s butt. “Get the hell
off my bed and out of my bedroom.” He hung up.

Alexa laughed as she watched Dan on the screen, flustered as all hell. “Too fun.”

Steve grinned, satisfied he could make her laugh again like he
had in college and in the early days of their marriage before he’d
switched to making money. “Still hungry, honey?”

“Yeah.” She planted her hands on his shoulders, which surprised
him a little. “But I want to go to our virtual party instead. We could
order room service.”

“It’s on a loop.” He boldly placed his hand over hers, going so
far as to give her fingers a little squeeze. “We can watch the fun and
festivities later.”

Left for dead in an enchanted forest, Kelli was raised by wolves,
which explains her thick coat of fur and keen night vision. As an
adolescent, she was exiled from the pack due to her love of well-done
steak smothered in ketchup (her penchant for blackened beef has also
caused her ejection from several fine eateries). On her own, she roamed
the streets, eating from dumpsters and sleeping in abandoned dog houses.
Cold, starving and destitute, Kelli turned to the oldest
profession—writing. Since her fall from grace, she has penned several
smutty stories for which she has received many accolades. And despite
her limited vocabulary, inability to punctuate properly and her
well-documented spelling disability, Kelli has collected an assortment
of awards (some of them for her writing). But what she wants most in the
world is to return to the enchanted forest and her pack. As soon as she
figures out north from south and east from west, she will do just that.

Until then, happy reading.

Steve and Alexa’s marriage could be anyone’s marriage really. You get stuck in a rut. Finances take precedent over romance and you lose sight of what made you a couple.

Chantal and Monty are a hot couple. Monty’s carefree attitude is a good match for Chantal’s organized demeanor. Their catering business is a success and with their upcoming marriage, they seem to be on top of the world.

Being snowed in forces Steve and Alexa to confront their problems. They never expected to see a hot couple getting busy on their granite counter tops and it gives them both a few ideas. Soon, they remember each other and really don’t mind missing their party.

Kelli packed a very big story in
one of the most heartfelt short stories I have ever read. It showed what
stepping outside the box in a marriage can really do and it also proved
that romance isn’t always dead. Oh, and always be on the lookout for security cameras 😉