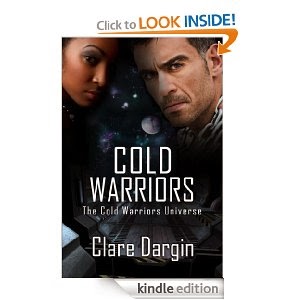 Left in
cryogenic stasis for nearly a century, Caitlin Driskoll is awakened and drafted
into a war she knows nothing about. Expected to defend a world where her kind
is despised and expendable, she discovers love and respect from the one man who
can’t be associated with her.

Lieutenant Colonel Medoro Keegan has spent a lifetime in the Marines. With no
family to speak of, the Corps and his ship, the USS Blanchard, are all the
loved ones he needs…until Caitlin sparks a fire within, that threatens to
consume him if he doesn’t walk away.

Will he choose a life of certainty in the only world he knows or give it all to
Caitlin and run the risk of losing someone, yet again?

Cold Warriors introduces us to Caitlin Driskoll and Medoro
Keegan. Caitlin is a reawakened Cryogenic woman from the 20th
century. Medoro Keegan is a lifelong Marine with aspirations to someday be in
charge of the USS Blanchard. What happens when the forbidden woman is all he
can think about?

~Excerpt~
He
didn’t know what to say. His first clash with her had distracted him to the
point of madness. It had been some time since he’d had such a powerful
encounter with a woman. The last one to push his buttons that hard, he wound up
marrying.
Caitlin
was stubborn, mouthy, somewhat insubordinate, and filled with an innate force
he had not seen in sometime. She had no problem in standing up for who or what
she believed in. He didn’t like the feelings she stirred in him. He dare not
consider them. Especially with her. She was a subordinate and a cryo. It was
against regulations for him to even think of starting anything with her.
He
shifted his stance. His heart pounded in his ears and breaths quickened. “Ms.
Driskoll. I don’t know what you expect from me.”
“Nothing
more than I expect from myself.”
Before
he knew it, he crossed the distance between them and swept her into a searing
kiss. He caressed her body, touching every curve. Arousal sped through his body
like lightening. He dug his fingers in her hair and hungrily dominated her
mouth, his tongue delving in, playing with hers. Gripping her waist, he lifted
her up and placed on her the table. She arched her neck exposing her creamy
skin. He nipped and bit at it enjoying its smoothness. He reached up and caressed
her breasts, a need filling him to see them, taste them.
He
was ready to slip off into oblivion when he remembered himself. It was the
middle of the day; they were in a briefing room and would be caught. Breaking
off the kiss, he raised his hands in surrender.
“Jesus,”
he said in between breaths.
“What?”
she panted, as she straightened her uniform.
“Please
leave. Just go.” He closed his eyes, wrestling his feelings into submission.
Holding them down, he shuddered. Dear God, help me. He needed
her so badly. His breathing slowed to a normal rate. When he opened his eyes,
she was gone.
“Sir,
you’re needed on the bridge,” the voice on the com said.
“Be
right there,” he replied, grateful for the distraction.
The world has changed a lot. Where there is peace on the
plant all human originate from, there is discord with the Vereans, an alien
species that wants to enslave humans.
Where in the 20th century some of the things
interracial couples dealt with was criticism for mixing the two races. In the
21st Medoro and Cate deal with another type of criticism… a former
cryo and the other a “normal” human.
Cryo’s are seen as lesser than human, because technically
they are not alive. Can these two make it work? Or will everything stack up
against them?
At first I wasn’t sure if I would enjoy this story due to
its heavy Sci-Fi influence, but how wrong was I… The fact that it takes place
so far into the future and in space gives it that extra element that not only
intrigues but also complicates things.
It is important to read Cold Warriors first and then Ice and
Peace… as it is a continuation of Cate and Medoro’s story and their struggles. 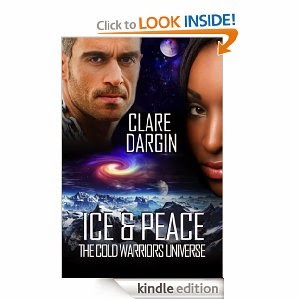 A New
Threat? After a long and
vicious war, peace is on the horizon for Earth and its allies. However, a
series of mysterious attacks on several secret military installations causes
hostilities to rise once again.

Redemption. Having left
under a cloud of disgrace, retired Marine Colonel Medoro Keegan is called back
to duty.

Bound. His wife Caitlin,
the only surviving member of her team, chooses to embrace life, albeit
grudgingly, as a cryo soldier. Seen as sub-human, she is forced to serve a
planet that denies her rights as a person.

Driven. Guided by their
sense of duty and belief that some things are bigger than them, they are
determined to risk it all.

Hope. The cost of war is
high. Can their love and marriage survive? Or will it be killed off by the very
same mission that brought them together?

Medoro and Cate have married since the end of Cold Warriors,
but where Medoro is now retired from his service in the Marines, Cate is still
committed to them. It is not all happiness for them, as Medoro misses being a
Marine and hates the secrets his wife has to keep from him, but life is about
to get more complicated.
After the success of the Cryo’s in Cold Warriors Command
finds that they are more of a benefit than a hindrance, quickly promoting Cate
to Chief of the Cryo program. With Cate’s secrets and Medoro’s growing
impatience, he quickly accepts the chance to return to the USS Blanchard. Will
that be the decision that ends his happiness and marriage?

Caitlin was a sight for sore eyes.
She was beautiful. Her petite frame was perfectly accented by the curves of her
figure. And her brown eyes and coffee-brown skin was smooth, creamy.
Standing at attention, she did not
meet his gaze. Though it was customary not to do as a sign of military
courtesy, he could tell she was not doing it for that reason. Her gaze was
different. Circling her, he tried to see if he could catch her watching him out
of the corner of her eye. In fact, she appeared to be staring blankly ahead.
Peering directly at her, he spoke in
a soft tone. “At ease.”
She relaxed.
“Cate. Can you hear me?”
“Yes, sir,” she responded
mechanically.
Pain pierced his insides. She was
definitely not there. Keegan placed his hands on his hips and hung his head in
defeat. The one thing that was supposed to go right did not. For whatever
reason, they had placed her in a deeper state of mental control than she’d ever
been in. He controlled the hostile emotions brewing with him. Touching her face
gently, he felt her icy skin.
This is
unacceptable! Not here. I will not let this happen here. Not under my command.
“Chief, listen up,” he said in an
authoritative tone. He knew in this state, it was the only way he could speak
to her and still have her respond.
“Yes, sir.” Her gaze became even
more distant.
Her response fueled his anger. “You
are going to hightail it down to the doc and receive a full examination. Tell
him it is based on my orders. He will know what to do. Is that clear?”
“Yes, sir.”
Knowing that she was under the
influence of cryo neurotransmitters, Keegan figured the only way to combat it
was to get someone to reverse it. They usually wore off once she was away from
the stimulus triggers for a long period of time. But considering her stimulus triggers
were high-ranking officers in uniform and combat situations, being around here
meant she was going to be in a drone zone for a very long time. The last thing
he needed was a zombie on board, especially one in charge of the lives others.
Only the jerks in psyche warfare
thought doing this to someone would be a good idea. As long as he was running
the ship, none of that would be allowed. There weren’t going to be any super
zombies soldiers on board his ship. And he’d rollover in his grave before he
let them do it to his wife.
“After you come back from the doc,
you will report to me, understood?”
“Yes, sir.”
“Are there any questions?”
“No, sir.”
“Dismissed.”
She did an about face before leaving the room. Keegan
clasped his hands behind his back. In the blink of an eye, his joy had turned
to sorrow. Now faced with the responsibility of looking after his wife, he
wondered how could he handle the burden of command and still protect the woman
he loved.
This is such an emotional story. The history between Medoro
and Cate has not been established in this book. Seeing them having to distance
themselves for the good of not only the mission but the crew as well is so
heart wrenching. It’s a loss that I couldn’t handle some times. I was so
emotionally invested in these two that I thought I was going to spend the whole
time crying, but that is what made me enjoy it. The fact that the author Clare
Dargin wrote them so wonderfully and passionately was exactly what makes a book
so good.
I will let you all take the time to read it to find out how
their story ends. Thank you Clare Dargin for writing such enjoyable stories. I
hope you all take the time to purchase them.
Happy reading.