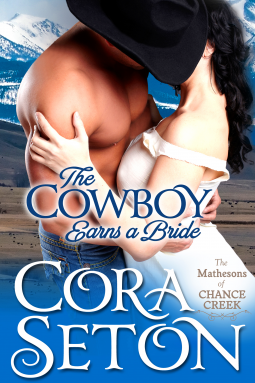 Wedding bells are ringing on the Double-Bar-K and Luke Matheson is determined to make his move on his favorite bridesmaid—sweet, sexy Mia Start. Though she’s shared his house for more than two months, she’s remained elusive. Luke’s ready to cross that divide, and win her love for good.
Mia would give anything to marry Luke, but he won’t want her once he knows the truth; she’s four months pregnant with another man’s child. It’s time to find a real home—and a real job—so she can raise her baby alone.
When a nosy neighbor exposes Mia’s pregnancy at his brother’s wedding, Luke sees his chance to finally get what he wants. He lays claim to the baby—and to Mia—but their happily-ever-after lasts barely a day. When Luke’s pride clashes with Mia’s need for independence, Mia calls their brand new engagement off.
Can Luke convince her to change her mind? Or will these wedding bells sound the death knell of their relationship?
Buy Links: Amazon / Barnes & Noble / Goodreads
ADRI’S REVIEW:
First of all thank you to NetGalley and Crush Star MultiMedia for allowing us to bring you this review.
The first thing I have to say is that I am a bit bias when it comes to Cora Seton as I have not come across anything she’s written that I dont like. So fair warning. I have been dying for Mia and Luke’s story for a long while now. I’ve wanted to know what would happen between them and what Luke’s reaction would be once he found out about Mia’s baby. Though Luke tends to reiterate that men are stupid sometimes, his heart is in the right place. All he really wants is to have Mia and to care for  her, he just goes about it in the wrong way. Mia’s strength and faith in herself are astounding especially after we learn so much more about her and her past. To fight for herself and what she wants for the betterment of her child is wonderful. There was one other element that I dont want to give away much, but let me just say this character has been digging himself in a grave as far as how I saw him for a number of books now, but completely redeemed himself in this one.
As once again though Cora has left me thirsting for more, left me wanting to know what is going on with another character. Hope to get to see more of him in the future.
Happy reading… Adri