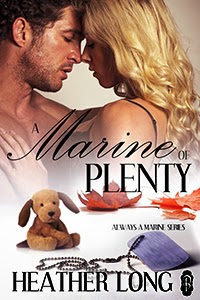 Serving overseas is a lonely duty…
Captain Charlie Sparks faces an impossible task—assigned to a
security detail for the sister of a fallen Marine. The last thing
Charlie wants is this beautiful woman in the middle of a base in
Afghanistan no matter what holiday she plans to help them celebrate. But
no one asked for his opinion, and worse, she’s everything he adores in a
woman and more…

Mourning what might have been is a terrible burden…
Jana Grimaldi had a plan—a plan to help her brother when he came
home, but his death in Afghanistan left a hole in her heart and a
desperate desire to do something. With the help of Congressman
Sparks, she heads to Afghanistan to bring Thanksgiving to the men and
women who served with her brother. Nervous and uneasy, she finds an
unexpected—and familiar ally in Captain Sparks…

Not all wounds heal…
Charlie was one of the first people to reach out to Jana,
communicating via email when her brother died—but coming face to face in
the lonely desolation of the holiday connects these two wounded souls…
Can Charlie and Jana find hope amidst the heartbreak this Thanksgiving?

Excerpt:
“Miss Grimaldi?” A deep, smooth, masculine voice pulled her back to
the present and the officer dressed in the deep dark tan and olive
MARPATS waiting inside the door. He stood easily over six-foot. The
uniform did little to disguise his broad shoulders or thick muscular
arms.
Rising, she adjusted her bag and held out her hand, fumbling for a greeting. “Hi. Captain…?”

“Sparks.” Quiet hesitation arrested his features and a muscle ticked in his jaw.

The congressman’s brother was her escort.

Her heart thudded against her ribs and her nerves stretched taut.
Captain Charles Sparks gave the order that led to her brother’s death—a
communication failure. She understood all the terms, the reasoning, and
the apologies. Even his letters expressed his heartfelt condolences and
apologies. Letters she’d answered, and he’d returned regularly.

He grasped her hand and the world seemed to shrink away, as though
someone dropped her in a drum and banged it loudly from the outside. His
words had provided a desperately needed source of
comfort—straightforward, blunt, and without any pretty excuses. A
mistake had been made, one costing a good man his life. He didn’t ask
for her forgiveness. He’d never asked her for it, no matter how many
exchanges they’d had.

Staring into his coffee-brown eyes, she knew he hadn’t forgiven himself. And that’s why Congressman Sparks offered his help and asked for mine. Weak-kneed, she sat abruptly. Her fisted grip on the captain’s hand pulled him forward a step.

Unexpected grief locked her throat and tears filmed her vision. She
held up her other hand and he wavered. Fighting the urge to sniffle, she
squeezed her eyes shut and concentrated on breathing. Grief might be
the one emotion everyone had in common, but acceptance came in its own
ways, on its own time. Understanding the concept intellectually and
experiencing it, however, were two completely opposite things, because
the crappiest part of her grief lay in how she couldn’t control it.

“No,” he said, his voice gruff. “I should apologize. I thought you received my e-mail about being your escort.”

“I haven’t looked at my e-mail since leaving Dallas, I’ve been so
focused on getting here.”
Moistening her lips, she struggled to bring
her tumbling emotions back into focus. It would be easy to hate the man,
to blame him for what happened, and to let anger take over her grief.

But easier didn’t make it right or fair.

Belatedly, she glanced up, surprised at her white-knuckled grip still
firm on his hand. He didn’t pull away or try to let her go, but sadness
clouded his eyes—sadness, and quite possibly regret. “I didn’t mean to
fall to pieces on you, Captain Sparks.”

GIVEAWAY:   For each holiday release, I will gift one copy through Amazon. To be entered, leave a comment with your favorite Thanksgiving memory and the email you would like you gift sent to.  The winner will be selected through random drawing.

Sarah and Adri’s Reviews:
So after discussing what to do about Heather Long’s Always a Marine Holiday collection, we have decided to do joint reviews.  We both love this series so much that we didn’t want to fight over it.   The good thing is that we share these Marines so well!

After the loss of her brother Jana decides the best way to
remember his memory is to visit his brothers in arms in the sandbox. With the
help of Congressman Sparks she is able to set up a Thanksgiving meal for the
troops who are based where her brother was. Charlie Sparks is a captain and the
man who gave the order that caused a fellow Marine his life. Now, he has
appointed himself as the one to escort and protect the man’s sister.
The way that Jana turns her loss, that she could have drown
under, into a positive is such a show of how strong of a character she is. It also
shows that she wanted to honor her brother in the best way she knew how, by
helping the same men and women that he worked with and putting her own life on
the line going to such a hostile place.
The guilt that is eating at Charlie is evident, he feels
it’s his fault that a family is having to grieve over the loss of one of their
family member’s, but at the same time he needs to keep his head clear and keep
the rest of the men under his charge safe and alive.
This story is guaranteed to have you crying, but even though
its emotional the quick chemistry between the two main characters will make you
laugh.
Sarah’s:
It is no secret that I am addicted to this series and I pounce when one is released or when Heather surprises me with sneak peeks or even an ARC.  If I am reading something, it gets set aside until I finish reading the latest Marine.   I love the conversations that Heather and I have through FB!

The above statement was said after I finished Marine in the Wind after I sent her this message:

“Are you trying to bump Matt off my favorites list?”

With every book, she blows me away.  Some hit my soul and my heart more than others, but this one hit in such a different way.  This is the first one that the love began over in the sandbox, but this one came as a result of a Marine dying.

Charlie was introduced in “What Part of Marine Don’t You Understand?” because he is Naomi’s brother.  I really like Charlie for multiple reasons.  He is Naomi’s brother, he blackmails for Girl Scout Cookies, he is loyal but protective and he was instantly protective Jana, but was fighting his instant feelings for her.

Jana is the sister of a fallen Marine that was under Charlie’s command.  Since her brother’s death, her parents have been distant and Jana didn’t want to be alone for Thanksgiving.  She contacts Congressman Sparks about going spend Thanksgiving with the Marines as part of Operation Proper Goodbye.  When I read that I was crying my eyes out. I have heard about it, but I don’t know much about it.  When she arrives, she discovers that Charlie is her “security” for lack of a better word but also Congressman Sparks brother.

During this heart-wrenching story, you can see how Charlie is beginning to feel about Jana, but doesn’t want to hurt Jana.  Jana, while grieving her brother, is giving back to the Marines with a Thanksgiving meal.  While she is doing that, she learns more about the Marine life and how her brother tried to protect her from the bad stuff.  She also meets some of his friends.

Their time together is short, but it is so very powerful.  My favorite line that gives me hope that Heather will give Charlie and Jana a full story in the future is:

“Naomi Sparks. My brother, Charlie, called me. He said you might need a friend and he asked if I’d stand in until he got home….”

REVIEW: It Had to be You by Kathryn Shay