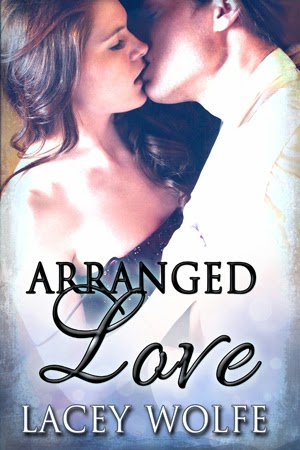 Nook: http://www.barnesandnoble.com/w/arranged-love-lacey-wolfe/1118082351?ean=2940148261810
Beachwalk Press: http://beachwalkpress.com/arranged-love/
They
think they’re fooling their parents, but really, the joke’s on them.

Kayla Ames’s parents could win an award in meddling. Every time she turns
around, they’re setting her up with someone new. Try as she might, she can’t
convince them to butt out of her love life.

Ryan Newell isn’t looking for love. After having his heart torn to shreds
by his ex, he’s determined to never again fall in love and leave himself that
vulnerable to being hurt. His parents, however, believe he just needs some help
finding the right woman, and their friends’ daughter, Kayla, might be a perfect
match.

Realizing they both have the same problem—parents who won’t stop nagging them
about finding a partner—Ryan and Kayla agree to an arrangement of sorts. All
they have to do is pretend to date, and they don’t even have to see each other,
they can discuss the details of their “dates” via email. But then the email
conversations lead to real dates, and Kayla finds herself struggling to keep
her feelings for Ryan in check as he’s made it clear love will not enter into
the equation for him. Then Kayla’s parents suddenly announce they’re getting a
divorce, and she begins to wonder if maybe Ryan has the right idea.

When it all gets to be too much for Kayla, she has a hard decision to
make—agree to stay with Ryan and never experience love, or walk away for her
chance to find it.

Excerpt:
Leaning
forward, Kayla grabbed the remote and turned the TV off. It was early still and
since she wasn’t tired, sleep wasn’t an option. She could go out again. Maybe
call a friend to go to a club or something. Or she could go back to the bar
from last night…no, no she couldn’t.

If she went out though, she’d have to change. And she was really comfortable.
She grabbed the remote again, and as the TV turned on, she swore she heard
someone tap on her door. Was Bunny chewing on something she shouldn’t be?

Kayla got off the couch, but saw the rabbit had taken a corner and was lying
there, far away from the front door. She peeked through the peephole and, to
her surprise, she saw Doug, or whatever his name was. Why was he there? And
what was he carrying in his hands?

Taking a deep breath, she opened the door. “Hi.”

“It’s nice to see you again.” He smiled an oh-so-sexy grin.
“Your parents sent me with food. They insisted I get this to you right
away.”

He held the bag out to her and she took it. “Could I come in?”

She sucked in her bottom lip and weighed her choices. Send him away and be done
with this, or see what he wants. What did she have to lose? “Sure.”

Doug brushed past her into her house. She stood back a moment, watching him as
he glanced around and then finally took a seat on her couch. Kayla joined the
mystery man in the living room, tossing the bag of food on the coffee table as
she sat on the love seat opposite of the couch he was on. Her stomach rumbled
as she inhaled the aroma from the bag now sitting on the coffee table.

“So, what brings you by, besides the food?” she asked, and quickly
added, “Please tell me your real name as well. It’s only fair since you
know mine.”

“Kayla, and it’s a lovely name. Mine is actually Ryan. Ryan Newell.”
He took a moment to rub his temple and proceeded. “Obviously, our parents
are interested in us hooking up.”

Hooking up…they’d covered that already. “I’m sorry. My parents are a bit
over the top.”

“I’d have to agree. Yours are a little worse than mine. Usually my parents
leave me alone, but with your folks, it was like they were double-teaming me.
They feel very strongly about you and I getting to know one another.”

“Figures. I’d say we accomplished that in a way they probably weren’t
wanting.”

He grinned again. Her heart fluttered. She needed to pack this man up and get
him out of there.

“Why don’t we give them what they want?”

What did he say? He couldn’t really want to go along with them. “Excuse
me.”

“Let’s date, for them. It’ll get them to leave us alone.”

She laughed. He wasn’t serious, was he? “Brilliant plan, but I’ll pass for
now.”

“Just hear me out. I’m not looking to fall in love. But if we pretend to
be dating, our parents won’t try to set us up anymore. We don’t even have to
see one another. We can discuss our dates and be on the same page with our
stories.”

“Wait.” She held her hand up, staring at the dark-haired man that
made her stomach do summersaults. “You’re saying we aren’t going to
actually date. We never have to see one another. But our parents will think we
are.”

Giveaway:
Lacey
Wolfe is giving away to $5 Amazon or Nook gift cards! Just enter the giveaway
below for your chance.

Rafflecopter URL:
http://www.rafflecopter.com/rafl/share-code/ZjVmZGEyOTUwYzBjOWI3MjdhNDJlZDY4YjgxZTBkOjc=/
Sarah’s Review:
Thanks to Lacey Wolfe and Beachwalk Press for the
opportunity to read this story.  I am a
huge fan of Lacey’s and am always excited to read her stories.
Overall, I truly enjoyed this story.  It demonstrated a couple things for me.  One being that love can come when you least
expect it and don’t really want anything to do with it.   Second, I am blessed that my parents have
never been so involved in my love life that they would put me in a situation
like this.
Ryan and Kayla meet before their setup by their
parents.  I like that they met before the
set up and how once they realized they were being set up, they made an
arrangement to keep their parents off their back.  What was supposed to be a mutual arrangement
to keep feelings out of it turns into something that neither of them saw
coming.  It scares both of them!
Ryan’s ex, Abbie, “befriends” Kayla at the gym.  Kayla, not knowing that Ryan and Abbie were
once a couple, begins to tell Abbie about Ryan and the arrangement.  Abbie is not someone that I like at
all!!
The parents, well, they are parents.  The typical put their nose in your business
parents.  You can’t do anything to change
them!


One of the things that I enjoyed the most about this story is that even though it was an arranged relationship story, it doesn’t follow the typical formula most of them do. Yes the two end up falling in love, but the fact that they started off wanting to pretend to have a relationship so that their family will get off their backs. The fact that Ryan and Kayla weren’t looking to find love but had already met before the parents had introduced them. The development of their relationship from pretend to a real one is fun and intriguing. Not to mention how spicy the book is overall.

Kayla is a funny character, she’s also a bit of a smart alec with her parents, which makes for the best kind of comedy in my opinion. And Ryan is such a sweetie and loyal person, but also protective of those he cares about.

The one thing that left me curious and wondering if we will know more about it in the future is the relationship between Kayla’s parents. So I am hoping that this is beginning of a series. *looks at Lacey Wolfe with hope*