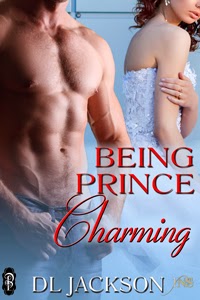 1Night Stand
Being Prince Charming
by
D. L. Jackson
“You’re
no Prince Charming.”
Words
screamed in anger, an empty nest, and an emptier life are just some of the
reasons people divorce. For Gunny, a diehard Marine who refuses to give up the
Corps, and Lissa his wife of over twenty years, the reason isn’t a good one. After
a heated argument morphs out of control, Lissa walks away and in his pride,
August refuses to go after her.
It
took two years, but Lissa is finally ready to move on with her life and marry
another man. Only one problem, her heart still belongs to the Marine she left
behind.
August
is back, looking for a second chance, and this time he isn’t letting Lissa walk
away without a fight. Gunny has given up everything, including the Marine
Corps, for a second chance with the woman he loves. Madam Eve has given him one
night to prove to Lissa he’s all she ever wanted—that he can still be her
Prince Charming. Fail, and she’ll marry another man in the morning.
For
this Marine—failure is not an option.
Being Prince Charming
A 1Night Stand Military
Fairytale
Amazon | Barnes & Noble
| All Romance eBooks | Decadent
About the Author:
D.
L. Jackson is an award-winning author of urban fantasy, science fiction,
military romance and erotic romance. She loves to incorporate crazy plot
twists, comedy and the unexpected into her worlds. As a U.S. Army veteran, she
naturally adores men in uniform and feels the world could always use more. She
does her part by incorporating as many sexy soldiers in her novels as she can.
When she isn’t writing or running the roads, you can often find her online
chatting with her peers and readers. Grab a cup of iced coffee, pull up your
virtual chair and say hi. She loves emails and blog visits from her readers.
www.authordljackson.com
Contact Details:
Website:
http://www.authordljackson.com
Email:
dlareejackson1@gmail.com
Facebook:
Author D. L. Jackson
Twitter:
@Dlaree69
Enjoy
the following excerpt for
Lissa never returned, going home to where
they’d been high school sweethearts, even if her family had long since moved
on. Gunny crumpled the divorce decree and tossed it in the trash, refusing to
hold onto the one souvenir he’d retained from his marriage with Lissa. Gone
were their wedding pictures, the dishes, pots and pans, everything that had
made their off-camp apartment a home, including the woman he still loved. He
surveyed the room. Except for a few pieces of plastic outdoor furniture, the
apartment sat empty as his life.
No matter how he tried, he couldn’t wrap his
mind around the finality and accept it. Marines didn’t give up. He picked up
his bags and walked out the door, not bothering to lock it behind him.
Anyone who wanted it could have the remnants of
his life. He’d finally retired from the Marines and, thanks to Cori, had
secured a job working for Sol’s company, Protect and Serve. Not that it
mattered. Without Lissa, he had no reason to care, but it would help him to get
by until he could figure out how to get his wife back.
Make that ex-wife.
And he would find a way. Eventually, she’d come
to her senses. No one could turn love off. He’d be the one to know. His heart
ached constantly for the woman he’d once had. He’d been an idiot not to listen
to what she said, to put the Corps before her. Hindsight being twenty-twenty
and all that, he decided he needed to man up, improvise, adapt, and overcome.
August strode up to the unsexiest vehicle a man
could own, a fifteen-year-old minivan with rusty doors, a black cloud of smoke
that followed wherever he drove it, and a driver’s side door that wouldn’t
open. He tossed his bags in the rear cargo area and climbed over the passenger
seat to take his place behind the wheel. Patting his pockets, he searched for
his key and extracted it, wondering why he even bothered to remove it from the
ignition. A thief would be doing him a favor to steal it.
GIVEAWAY GOES FROM JANUARY 8TH -22ND, 2014

Sarah’s Review:
Thanks to D.L. Jackson and Decadent Publishing for an ARC of this great story.  I have been a fan since Cinderella Wore Combat Boots and each one gets better.   I asked Ms. Jackson if she would be willing to give a copy away and she said that she would give all three away; Cinderella Wore Combat Boots, Being Prince Charming and Beauty & the Brigadier (which comes out on the 14th).

As someone that as never been married, I don’t know what it is like to go through difficulties in marriage.  However, I am fully aware that you have to put work into a marriage in order for it to work.  Being a military spouse is so much harder.

August and Lisa are one of my many favorite couples I have read in a
long time.   I enjoy the fact that they were high school sweethearts and
August finally got his head unstuck after two years and wanted to win
his wife back.  My heart soared and was rooting for him.