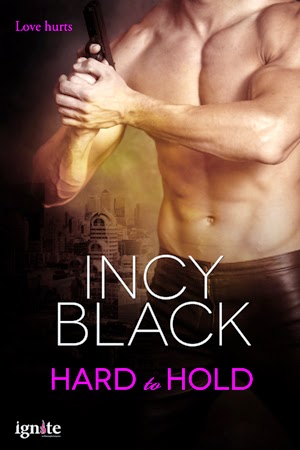 Hard
to Hold
Incy
Black
Release
Date: 4/28
Genre:
Romantic Suspense
Author
Website: http://incyblack.weebly.com/home.html
Author
Blog: http://incyblack.weebly.com/
Author
Twitter: https://twitter.com/IncyBlack
Author
Facebook: http://www.facebook.com/incy.black (profile)
Author
Goodreads: http://www.goodreads.com/user/show/8091237-incy-black
Newsletter:
To Come
Author Bio:
It took a swan dive from a roof to convince Incy
(aged 5) she wasn’t an avenging fairy and that no, she most certainly couldn’t
fly.  Bruised but undefeated she
retreated deeper into her make-believe world populated with the brave and the
poisonous.
When not fighting injustice and righting wrongs
on ‘Planet Incy’, she works as a Marketing Director. (Unfortunately, her law
degree languishes unused, the distinction between good and evil proving too
worrisome in real life.)
Her five children are well versed in what scares
her (most things) and delight in pushing her neurotic buttons—at their peril.
Book Synopsis:
Anna Key Marshall is about to get what she’s
always wanted: a baby. Granted, it’s through a sperm donor instead of her
ex-husband, but you can’t have everything. She has no idea why someone wants
her dead, but she’ll do whatever it takes to protect her unborn child—even if
it means turning to her ex, the Black Ops specialist who broke her heart.
Five years ago, British Intelligence agent Nick
Marshall slammed the door on the woman who betrayed him. But now Anna’s back in
his life with a vengeance, pregnant and full of attitude. He’d like nothing
better than to walk away, but with her life on the line, he has no choice but
to do what he does best—protect her at all costs.
As old wounds resurface, Nick begins to doubt his
version of what went down with Anna so long ago. And he begins to believe they
might have a second chance together. But with Anna’s would-be killer on the
loose—it will take the full force and fury of his protective instincts, fueled
by a powerful love he can’t leave behind, to hold on to the woman he still
loves.
Tagline: Love
hurts.
Goodreads Book Link:
https://www.goodreads.com/book/show/21893703-hard-to-hold
Amazon Buy Link: http://amzn.to/PcWLna
Amazon UK Buy Link: (INCLUDE ON TOUR PLZ)
http://amzn.to/1eRaVqK
Barnes & Noble Buy Link: http://bit.ly/1qVHBAN

Sarah’s Review:
Thank you to Entangled Publishing for the opportunity to read and review this story.  There was something about this story that caught my attention.

The history of Anna and Nick from childhood to present broke my heart. From the way that they grew up to the way that they divorced, there is something about the two of them that you are rooting for them to get their heads right and realize that they belong together.

When Anna finds out who her baby’s biological father is, the chaos ensues.  There were questionable things occurring prior to Nick coming back in the picture and things got worse after Anna discovers the paternity of her unborn baby.