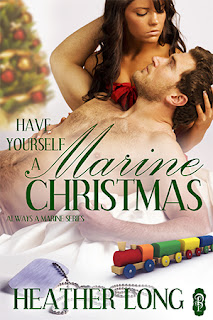 Man oh man is this a great one… Heather Long has done it
again, but this time even better. How you may wonder… easy she has written a
Marine that is not only amazing but strong as well. Ryan “Rebel” Brun is
definitely a character that gives my favorite Marine Paul a run for his money. Thanks
to Noel he didn’t lose his drive to live.
It kills Noel to see how closed off from the Christmas
Holiday Rebel is. As his case nurse she’s gotten to learn about him in the year
he’s been her patient. She’s also heard stories of how much he used to love the
holiday and how before he was injured he’d do anything he could to make those
around him happy, which is why it hurts her so much to see him so angry.
The small things that help him come out of his funk and
return to being the man that he was before are so amazing. I think Chrissy and
her wish from Santa is what really pushes him in the direction to change back
to the man he used to be.
This story had me crying tears of pain for all that Reb has
been through. Tears of joy for how it ends and tears for how sweet this story
is.
Hope you run off and get your copy today… Also remember that
part of the proceeds help the Marine’s Toys for Tots foundation.
Happy Reading… Adri
Sarah’s Review:
Thanks to Heather Long and Decadent Publishing for the ARC.   I am addicted this series and can’t wait for more!  As I write this review, I was on the phone with Adri saying “I don’t know how to review this!” because I really don’t.

Rebel is one of those characters that I love. Stubborn, Alpha males…………..sigh!  Noel, man, I love her!  These two characters are a force of nature apart, but together, man these two can be a force to be teamed up with.

I loved the way Noel handle Reb and doesn’t let him bullshit his way out of anything but she also knows when to let him handle things the way he needs to handle it.  Poor Reb never stood a chance against Noel, especially once he knew he wanted to be more than a patient to her.   I also love how Reb was able to get Noel to realize what she wanted as well!

Giveaway time:
When you leave a comment, pick someone to be Secret Santa for.  Make sure you include the email for that person and why you choose that person.  That will be included when the gift is sent to them on Saturday, November 30th.