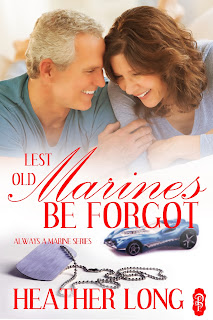 Always a Marine
Lest Old Marines Be Forgot
by
HEATHER LONG
She
never stopped grieving…
It’s
New Year’s Eve, and thirty years since Brenda Connors buried the only man she
ever loved. Every year on the anniversary of his death, she finds herself in
the hospital, suffering from chest pains. No matter how expected, it always
takes her breath away. This year…this year she wants it to be different and
takes the advice of her best friend and would be sister-in-law to sign up for a
one-night stand. It seems ridiculous, just a year shy of her fiftieth birthday
to try and seek happiness she long since gave up on. She never imagined a stern
faced Marine with talent for making her laugh…
He
doesn’t know what the future holds…
Married
to his career and facing forced retirement, Major Tom Baxter doesn’t see much
of a future for himself in civilian life. A poker game with the son of an old
friend earns him some unwanted advice, but it’s advice he can’t get out of his
head. He signs up for a one-night stand, to discover what life on the outside
might have to offer. The last thing he expected was an elegant soul with a
streak of mischief…
Ringing
in a new beginning…
Can
Tom and Brenda make every second of their countdown to midnight count, lest old
Marines be forgot?
Lest Old Marines Be Forgot
Always a Marine
Release Date: December 2,
2013 – All Links Pending Release

National
bestselling author, Heather Long, likes long walks in the park, science
fiction, superheroes, Marines, and men who aren’t douche bags. Her books are
filled with heroes and heroines tangled in romance as hot as Texas summertime.
From paranormal historical westerns to contemporary military romance, Heather
might switch genres, but one thing is true in all of her stories—her characters
drive the books. When she’s not wrangling her menagerie of animals, she devotes
her time to family and friends she considers family. She believes if you like
your heroes so real you could lick the grit off their chest, and your heroines
so likable, you’re sure you’ve been friends with women just like them, you’ll
enjoy her worlds as much as she does.

Facebook:
http://www.facebook.com/HeatherLongAuthor
Twitter:
http://www.twitter.com/HVLong
Enjoy
the following excerpt for Lest Old Marines Be Forgot:
Their table sat in an alcove that also doubled as a
private balcony and overlooked a lit garden. According to his hostess, he and
his date would also be able to see the fireworks over Dallas later should they
still be at their table at midnight. If not, then their reserved suite also had
a balcony and a good vantage point. A marble-floored hallway led to their
dining table and though the alcove was simply one of several such isolated
settings, theirs possessed heavy cream curtains that could be closed to afford
them further privacy.
Overall, it was an excellent choice on Luke’s part.
Fortunately, years of not doing much with his salary meant Tom could also
afford the evening comfortably. He finished the cup of coffee and checked his
watch. Fifteen minutes to operation launch and he heard heels tapping on the
marble floor caught his attention. Glancing sideways, he spotted a pair of
elegant, long legs. Trailing his attention upward, he studied the woman
approaching.
The body-hugging sheathe of a dress molded her
curves, and what a shape she had…. Dark hair brushed her shoulders, the silvery
streaks amidst the deep brown seemed almost artistic. Straightening, he frowned
when she hesitated and checked her phone. The curl of anticipation in his gut
flattened out.
It didn’t matter if the elegant woman searched for
another date; he couldn’t take his attention off her. She all but glared at her
phone. A heartbeat later, she rewarded his captivation when her exasperation
transformed into sparkling laughter.
Squaring her shoulders, she lifted her chin and
their gazes collided. Her smile faltered for a heartbeat, then warmed. At her
look, he rose to his feet and enjoyed her long walk down the hall.
“Ms. Connors.” He extended his hand automatically,
her smooth palm gliding against his.
A hint of shyness softened her expression, but she
didn’t look away. “Mr. Baxter. Can I just say that you chose the loveliest spot
for dinner?”
Boosted by the compliment and her lovely manner, he
inclined his head. “Only if you’ll allow me to say that you outshine the
location—and then some.” He’d never really been that good with flowery
compliments, but a hint of color bloomed over her cheeks and he let out a
breath. “Here….” To pull out her seat meant he had to let go of her hand.
She had slender fingers, beautiful and tapered, and
they’d been silky-soft with the barest hint of callouses on her index fingers
and thumbs. Callouses that meant she used tools, but probably didn’t build or
work with anything. His brain’s need to catalog details had proven a godsend in
the field, but he didn’t need to pick apart his date.
“Thank you,” Brenda murmured and slipped around him
to take the chair he held out and he scooted it in just as she sat. From his
vantage point, he had a direct view of her cleavage and the teasing hint of a
dark mole on the curve of her right breast.
Clearing his throat, he moved back to his seat. “Of
course.”

GIVEAWAY:  One person who comments will be gifted a copy of this book.

Sarah’s Review:
Thanks to Heather Long and Decadent Publishing for ensuring that I am able to read and review such wonderful stories.  You both continue to feed me reading addiction and for that I will always be thankful that I was led to this series!  It was a nice surprise to wake up to the day after Thanksgiving and I read it very quickly!  In fact, I read it twice before I even attempted to write this review.
What I loved the most about this story was that Tom and Brenda are “older” than the usual romance characters that I normally read.  I love reading stories about mature couples that have experienced life and know how to handle it without all the drama that the younger generations do.  As much as I love the younger generations, there is something about the “older” couples that I can relate to more in some cases.
I have to say that this is the sweetest 1NS story I have ever read.  I have read several of them, but this is the sweetest most romantic one I have read.  Tom has a way with making Brenda so comfortable while Brenda had a way of making Tom want to be something other than the Marine that he is.
I love that we were able to see some of our old friends in the very beginning of this story.  I loved Tom’s back story as well.
A side note for Heather, you did it!  You finally bumped my favorite couple (Brody & Shannon).  Okay, well, it is a tight race between Brody & Shannon and Tom  & Brenda.

As I sat to write this review I had to take a moment to
think hard how I was going to write this without giving too much away as well
as do it the justice it deserves. Somehow Heather Long keeps finding a way to
making each and every story better and better.

Tom is one of those characters you wonder at the beginning
how he is going handle his one night with Brenda. As a lifelong Marine who is
on the brink of retirement he doesn’t really know what he is going to do with
the rest of his life. For someone who is used to structure and direction, it’s
understandable why this change in his life is so difficult. But never did he
think that a one night stand and a nervous, sensitive woman could change him so
quickly.
Now Brenda, what can I say… I’ve never had a favorite female
character per say, I’ve always loved Jazz, but I always see her as part of a
trio not her own person… I’m weird that way, but back to the point, Brenda has
become my favorite female character. Her love and dedication to the man who she
lost thirty years before is so beautiful, I do find it a bit sad that over the
years her grief finds a way to manifest itself in a physical manner. I will
repeat though that, Brenda is my favorite female character.
I will say this when I first read the blurb on this story I
didn’t think I would enjoy an older couple, but boy was I wrong. It was
actually very refreshing to read, for some reason it felt more intimate and
romantic. Whether it was the characters themselves or their maturity I don’t know,
but I would speculate to be the fact that they’ve seen and lived through more
than most of the other couples we are used to reading.

Well I hope you enjoy the last one of Heather
Long’s Holiday Always A Marine stories as much as we have. Happy Reading… Adri