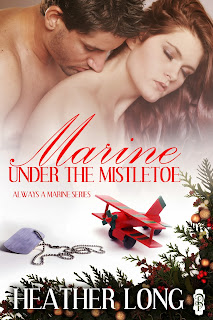 Ok I have to admit when I first started to read this one I
was like HUH? But then as I continued I was like AHHH!!! And now I have you all
wondering what the heck I’m talking about…
In this Marine story we meet Kaiden, a man who is home from
leave for the first time in ten years. His first greeting at arriving at a
cabin is his lifelong friend Aaron naked (yeah this is where I was like WHAT?),
my first instinct was to think Heather Long wrote a nudist colony? But fear
not, that is not at all what she did… Kaiden is part of a Pagan coven (and
that’s the AHHH moment)… He’d stayed away from home not thinking he deserved to
be accepted amongst all those who believe as he did growing up. In his eyes
he’d violated one of their cardinal rules, he was doing his job as a Marine,
but it was hard for him to accept that and believe the others would too.
That is where Rowan comes in. A fairly new member of the
coven, she came into the group a few years after he’d already enlisted so she
didn’t know the man from before. She is able to see him differently, which goes
a long way into helping them both bond. She doesn’t have expectations for him
like so many of the others do. She doesn’t see the hard, changed man. She only
sees the man who is trying to beat himself up for doing his job. Her
objectivity helps him see that it’s okay to still do his job and live with the
beliefs he grew up with. She also teaches him how important it is to follow
your gut, your instincts and that we all have a path we need to follow. That
there are reasons for every event we have experienced in our lives.
I have to say it really did make me so much more curious
about the Pagan way… So I might just have to research it and thank Heather Long
for teaching me something new…
I hope this review made you all curious enough to want to go
out to read it, because it really is a fun read… Happy Reading… Adri
Sarah’s Review:
Thanks to Heather Long and Decadent Publishing for continuing to provide an Always a Marine addict with more stories to read.  This is the third holiday story that Ms. Long is releasing for the holiday season.
Like Adri, at first I was really confused, but I trust Heather to give me a great story, so I kept going.  I don’t know much about the Pagan ways, but this story was an interesting way to learn something new.  Leave it to Heather to find a way to teach me something new.

Kaiden and Rowan meet when Kaiden returns home to celebrate Yule with his parents.  What Kaiden didn’t expect was Rowan becoming important to him during his visit.  Rowan was able to break through that tough Marine exterior and get Kaiden to open up to her and she found a way to make him understand that he was still a part of the coven and he could still be a Marine.