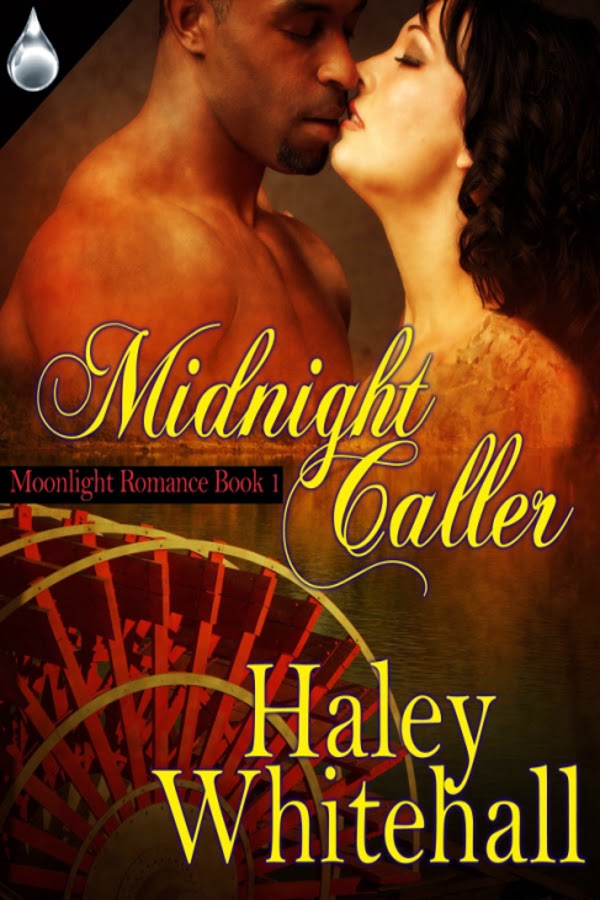 Life
without love is painful, but in 1865 forbidden fruit can be deadly.
When a wealthy widow decides to enjoy her new-found freedom, she puts
more than her reputation on the line. An unwanted suitor means to have
her, or no one will. From sizzling sex to life-threatening danger, the
intrigue will keep you turning the pages of Midnight Caller, Haley Whitehall’s sizzling new romance.


When Emma Bennett’s husband dies in a carriage accident in 1865, she
is released from her loveless, controlling marriage. Now she has a
chance to find happiness and raise a family. But before she begins
courting again she wants to experience her freedom. At the advice of the
leading socialite in town, she takes a black lover to fulfill her
sexual needs. His raw, masculine power awakens feelings she didn’t know
existed. After the first touch she craves more.


Frederick works as a roustabout by day and moonlights as a
prostitute. He knows better than to fall in love with his white client,
but Emma enchants him the first time he calls on her. To keep them both
safe, he works hard to put up barriers. Unfortunately, he can’t protect
Emma from the slimy Mr. Hawthorne, who wants her as his bride. Frederick
vows to keep her safe even if his forbidden love costs him his life.


Emma reached across the table
and tentatively held his hand. Her warm skin and soft touch sent a lightning
bolt to his core. Lust consumed him. He craved more. He wanted to feel her bare
chest rub up against his. To see her eyes brighten by the throes of passion, to
hear her moan.
What was wrong with him? He was
yearning after this delicate creature before they even got to the bedroom.
Never before had a woman—white or black—gotten to him like this. She is a
client. Control yourself.
He pressed the coffee cup to
his lips and focused on the taste of the dark liquid. He rolled the acrid drink
in his mouth before swallowing, grasping at any distraction.
“Why do you do what you do? I
mean this.”
Her absurd question sounded
sincere. Frederick nearly choked on his coffee. “For the money. I’m saving for
a house.” He didn’t want to spend his entire life on the river. He wanted his
own land. One night with a woman earned him double the pay for a day’s work on
the steamboat.
“Oh,” Emma said as if she
expected a different answer. She unwound her small fingers from his large hand.
Uncertainty played across her face.
He held his breath, his insides
pressed together. Was she going to send him away?
Finally, her lips settled in a
smile. “Shall
we go to the bedroom?”
“As you wish, ma’am.” He managed to sound
casual despite his hardening cock. When he took off his clothes she’d find out
in an instant how attractive he found her, how much he desired her, the power
she held over him…

Already his thoughts had moved past coffee
and to his delightful business. He couldn’t wait to see her naked, know the
curve of her breasts, let his hands roam her hips. He’d laid with a lot of
women, but never one as young and as sumptuous as this one.

“Strip to the waist and sit on the bed.”
“Yes, ma’am.” Frederick pulled off his shoes,
and then he folded and piled his coat, vest, and shirt neatly on the floor
before sitting on the edge of the mattress. The attraction between them was
strong and undeniable. He was a bee and she was a beautiful rose. He was
sure her nectar would be delicious, if only he would be granted a taste.
Whether he would be granted a taste was in her hands. She was paying for an
experience, and it was his duty to give her whatever she wanted. It wasn’t in
his nature to submit, but the sight of her beauty as she stood before him with
that glow in her eyes, made it more bearable.
He knew his job after more secret trysts than
he could count and fell into his role easily. He genuinely wanted to please
Emma, though. He sensed her hesitation. He hoped she’d muster the confidence to
play her part.
“Spread your legs.” Emma walked into him,
standing between his splayed thighs. She traced every muscle in his chest. The
pads of her fingers gently caressed him, almost teasing. He tightened his
stomach muscles, but was unable to prevent a tiny shudder.

Her
smile widened, revealing a row of perfectly straight teeth. A thrum of pleasure
rushed through him. He wanted to wrap his arms around her but resisted. He
had not been given permission.

GIVEAWAY: Haley Whitehall is giving a copy of Midnight Caller to one lucky commenter who leaves the title and link to your favorite interracial or African American story.  Please make sure she can contact you by providing your email.

Sarah’s Review:
Thank you to Haley Whitehall for reaching out and asking us to review her book.If she hadn’t requested a review, I would have never found this story or the subsequent stories that follow.

This story is set in 1865-1866 and if you like historical romances, then you may enjoy this one.  This story discusses how even after slavery was abolished, people still treated African-Americans.

I really have to be a in certain type of mood to read historical romances because I have remember that the times have changed.  However, this one caught my attention and kept it through out the whole story.  As a matter of fact, I told Erin that she may enjoy it to, since she is usually our historical romance reviewer.

I liked these characters instantly and I thought that Emma had a secret within a couple chapters, but I was not shocked by the surprise.  I have suspicions about Emma’s husband death not being an accident.