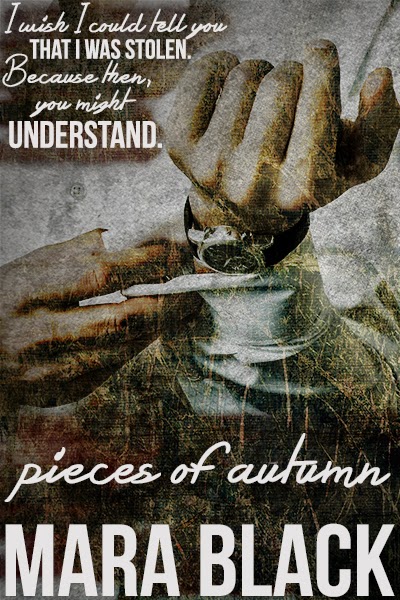 Title:  Pieces of Autumn
Author:   Mara Black
Genre: Dark Romance 18 +
Publish Date:   July 31, 2014
Publisher:  Indie Published
Event organized by: Literati Author Services, Inc.
~ Book Synopsis ~
I wish I could tell you that I was stolen.
Kidnapped off the street in some third-world country, sold against my will, while a desperate family back home waited and prayed and talked about me on the news.
I wish I could tell you that, because then you might understand.
What really happened? I walked to my fate with my eyes wide open. But before you say I deserved whatever happened to me, you should know. I was desperate. I was alone. I was afraid for my life. You would have done the same thing.
I thought things couldn’t possibly get any worse.
But then, I woke up in darkness, unable to move. There was only one thing I was sure of: I wasn’t alone anymore.
And then I heard HIS voice…
Add to Goodreads:
Purchase Links
Amazon  | Barnes and Noble
Erin’s Review

This is a book you have to pay attention to. It isn’t your typical dark romance, Autumn doesn’t get captured, she willingly goes. Why does she do that, you ask? Well, see that’s where you must pay attention.
The story is set sometime in the not so distant future. The world is much different than what it is now. People will do whatever they have to to get by. In this world people change. It’s fight or flight for most, at least where Autumn is. Then she meets him.
Tate is a complex person. Circumstances have helped create the man he is today. He is guarded, jaded and lethal when he has to be.
He and Autumn’s romance isn’t hearts and flowers. It’s darker than that. There are times I wasn’t sure I would call it romance. It was more of a primal need. He and Autumn together are like chaos. They bring out the best, and worst in each other. She makes him feel things he hasn’t felt in years and he gives her something she longs for. Can Tate make Autumn whole again? Can Autumn get Tate to face his demons? Or will the pieces of the two of them be too tattered to be able to be made whole again?
While this book isn’t as dark as some that I have read, there are many dark elements about it. The story is intriguing, the characters stripped bare and you want them to be happy.
I hope you enjoy the story as much as I did. It’s a solid 4 star read from me and comes highly recommended.

Mara Black is a connoisseur of love that lurks in the shadows .
Facebook
Giveaway
Signed book
Entry-Form