Synopsis:
Izzy Gallo has never been described as a member of the weaker sex. She’s a woman who doesn’t take shit from anyone. Growing up with four older overprotective brothers has hardened her, making her a force to be reckoned with.
Against the wishes of her two brothers, Joe and Mike, Izzy takes a weekend trip to Bike Week in Daytona, turning her world upside down. Over her head, in a world she doesn’t understand, there’s only one man who can save her.
James Caldo has dedicated his life to protect and serve as a member of the DEA. He’s cocky, overbearing, and doesn’t take no for an answer – the Gallo men have nothing on him.
When their paths cross, James makes Izzy question everything she believes about completely surrendering to the opposite sex.
Does James have what it takes to overpower the headstrong Izzy, capturing her heart forever?

If you thought the Gallo men were something else, just wait until you get to know Izzy! I always knew she was a ballbaster but I didn’t realize just how much of one she was until now. She’s a girl that’s not afraid to speak her mind and go after what she wants. She’s got men by the balls..until James.

Izzy and James are like an erupting volcano. It’s instant heat when these two are around each other. James will do whatever he can to prove to Izzy that she won’t be able to live without him. Izzy will do whatever she can to make him think otherwise.

We get the rest of the Gallo family, how can we not. We love our Gallo men and we also get a better idea of the danger Thomas is in. It finally sinks in to Izzy that she’s over her head during an impromptu trip to bike week and her tough girl exterior can only take her so far.

James sees a challenge in Izzy. He loves her headstrong but he knows there’s another side to her. It’ll just take the right man to bring it out. He gives her as good as he gets and the back and forth between these two will have you shaking your head laughing and wanting to strangle Izzy at the same time. There were many times I shouted, “Hell, I’ll take him then!” Imagine the looks I got from my husband…..

It takes a special kind of man to accept a woman like Izzy. Especially when he wants the whole package. He doesn’t want to break her, or wear her down. Izzy’s reluctance is at times, fun to watch. Just wait until you read their texts.

Can James finally crack through Izzy’s shell? Can Izzy prove to James she’s not a wilting wallflower needing rescued? Guess you’ll have to read and find out. This book was my absolute favorite out of the series so far. Chelle Bliss just keeps getting better!

I’d already raised
my voice, but I couldn’t fucking help it. The woman was maddening.
“I’m exactly what you need and want. You’re too fucking scared
to admit it.”
She shook her head as
she crawled out of bed and started to dress. “You’re not all
that.”
“When you grow the
fuck up, call me,” I said as I stalked toward her.
“You’re a total
dick,” she hissed, moving to slap me.
I grabbed her wrist,
pulling her to my body. Gripping her hair in my fist, I gave it a
slight tug as I hovered over her lips. She gasped, holding my
shoulders.
“You know you want
me,” I growled, my lips a breath away from hers. “I wrecked you
for any other man. I own your ass, Izzy. I’ll let you run, but you
can’t resist me forever.” 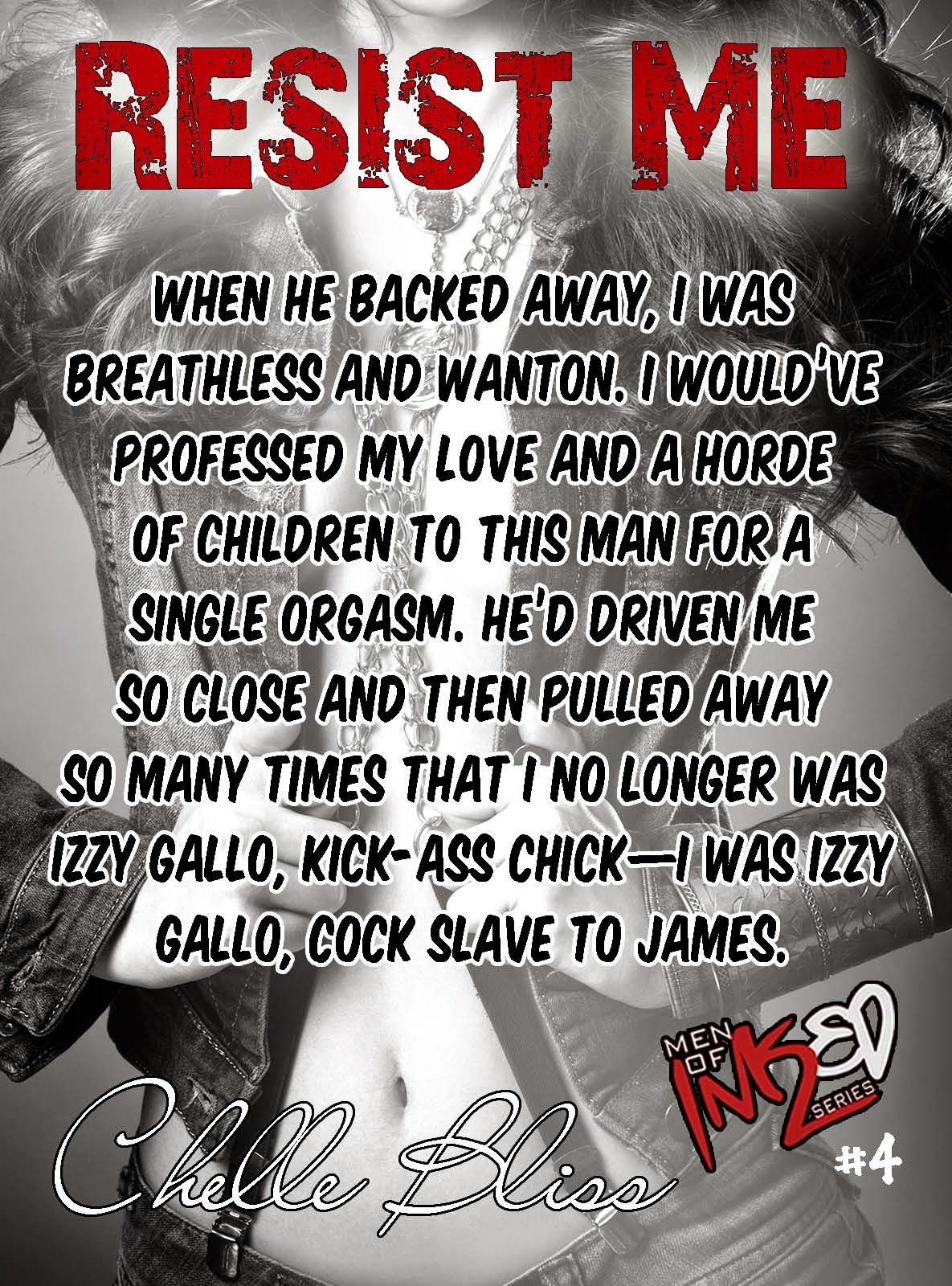