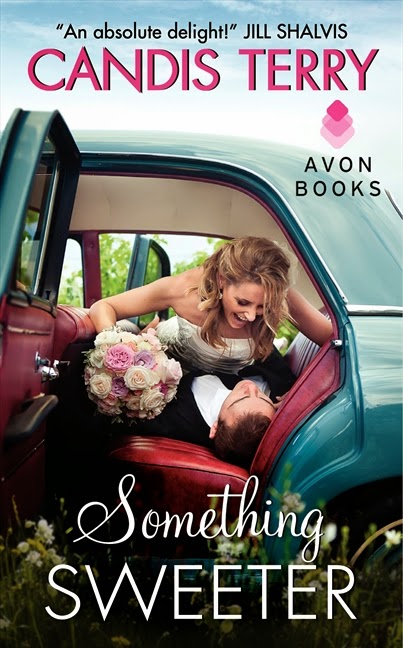 The men in
Texas are hard to resist . . . Seattle event planner Allison Lane is an expert
at delivering the perfect wedding—even if she might not exactly believe in the
whole “’til death do us part” thing. When her father decides to tie
the knot with a woman he barely knows, Allison heads to Sweet, Texas, to make
sure his new honey is the real deal. What she didn’t expect to find at the
local honky-tonk was a sexy Southern man as bent on charming her pants off as
he is on blowing her “true love doesn’t exist” theory all to hell.
And they always promise . . .

Veterinarian, former Marine, and Sweet’s favorite playboy Jesse Wilder takes
one look at Allison and knows she’s a handful of trouble he can’t deny. But
even after a sizzling kiss and obvious mutual attraction, it seems Allison has
no such problem. When Jesse uncovers her sweet side, can he crush his playboy
image, melt her cynical heart, and change her mind about taking a trip down the
aisle?

Link to Follow
Tour: http://tastybooktours.blogspot.com/2014/05/now-booking-tasty-virtual-tour-for_20.html
Buy Links
Amazon: http://www.amazon.com/Something-Sweeter-Sweet-Texas-Candis-ebook/dp/B00FJ34YHS/ref=tmm_kin_swatch_0?_encoding=UTF8&sr=&qid=
B&N: http://www.barnesandnoble.com/w/something-sweeter-candis-terry/1117005010?ean=9780062237262
iTunes: https://itunes.apple.com/us/book/something-sweeter/id718579932?mt=11
Goodreads Link: https://www.goodreads.com/book/show/18599713-something-sweeter?from_search=true
Author Info
Candis
Terry was born and raised near the sunny beaches of Southern California and now
makes her home on an Idaho farm. She’s experienced life in such diverse ways as
working in a Hollywood recording studio to chasing down wayward steers. Only
one thing has remained the same: her passion for writing stories about
relationships, the push and pull in the search for love, and the security one
finds in their own happily ever after.
Author Links
Website: http://www.candisterry.com/
Facebook: https://www.facebook.com/candis.terry
Twitter: https://twitter.com/CandisTerry
Goodreads: http://www.goodreads.com/author/show/4935263.Candis_Terry

Rafflecopter Giveaway
($25.00 Amazon or B&N Gift Card and Signed Copy of SOMETHING SWEETER)

Sarah’s Review:
Thank you to Candis Terry and Tasty Book Tours for the opportunity to read and review this great book.  I owe both of them an additional thanks because they both were extremely understanding with the fact that this review was likely going to be late due to the death of my best friend.  Well, it is the same day but a couple hours later than it should have been.  I recently found this series when Sweetest Mistake released and when I saw this was up for a tour, I knew I had to get in on the action.  I fell in love with the characters of Sweet, Texas and I wish I lived in that community!

What I love:
The characters:
Jesse Wilder is the heart breaking Veterinarian of Sweet, Texas but he loves his family with his entire heart.  During the course of this book, we come to find out why Jesse is the way he is and it has to do with Jared, the oldest brother that died in combat.  Even when Jesse wasn’t aware of his feelings for Allison, he knew something was different and was fighting because of the promise he made to Jared.  Jesse’s loyalty is what I love most about him.

Allison is the daughter of Jana’s fiance and she comes to town to figure out why her dad wants to marry Jana all of a sudden when neither her nor her sister had even met Jana.  What Allison doesn’t expect to find is the unconditional love of Jana and the rest of the family.  When crises come up with Charli and Reno’s wedding. Allison refuses to let their big day go down in flames.

I personally can’t wait for more about the Wilder family and seeing them get their happy ever afters!!