REVIEW: Goddess of the Hunt by Becky Flade 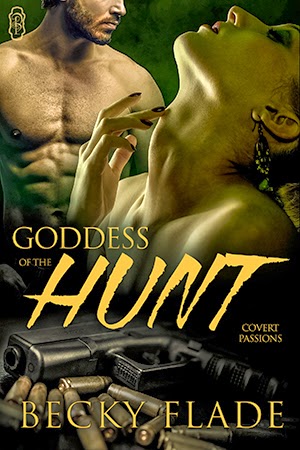 Goddess of the Hunt
Becky Flade

CIA field agent Paige Aster hides a cunning intelligence and lethal
skill behind a mask of golden beauty. It serves her well as she moves
from one undercover assignment to the next.

Retrieve a stolen United States military defense program from a
terrorist cell in Dublin, Ireland, before they trade it to Islamic
extremists in exchange for munitions. Her only back up on this
time-sensitive mission is a deeply embedded MI-6 operative.

Eoin Fitzpatrick has sacrificed everyone he holds dear to bring these
terrorists to justice. He’ll sacrifice Diana, too, if she threatens to
compromise his mission or his cover. He has orders to do just that – his
agency is only doing hers a favor.

Paige expects danger, but welcomes passion—taking her pleasure where
and when it’s offered. She’s not prepared for the effect Eoin has on
her. Or what happens when she surrenders to him—Paige burns for Eoin but
will he leave her burned…

“Is it done? Do you and the others in the house bring in sex partners from time to time?” She straightened and stared at him.

“Yes.” He hissed the answer.

“I’m travelling; you and I meet at a pub and go to your place to
hook up. It’s simple and happens all the time. Believable, even.” She
thought of Michel and her lips tilted at the corners. Then, casting her
eyes over Eoin, she deliberately arched a brow and tucked her tongue in
her cheek. “Well, for most people, anyway.”

His lips thinned and the muscles in his cheek ticked as he worked
to control the flare of temper. It delighted her. “Fine, we’ll do it
your way.” Eoin pushed himself from the chair he’d been perched on and
nearly charged for the door. “I’ll be here at seven-thirty tomorrow
morning, be ready.”

Paige grabbed his arm as he passed her. “What are you so worked
up about? If it goes wrong, you can just leave me hanging and you know
it. This costs you nothing, Paddy-boy; it’s my ass on the line.”

He grabbed her shirt and pushed her against the closet door. She
didn’t fight it and he had his mouth on her in seconds. His tongue
delved and demanded she respond; she arched up into the kiss. Delight,
desire, and anger thrummed through her as she both succumbed and made
demands of her own. His hands molded to her hips and pinned her between
the hard planes of his body and the wall behind her. Then he abruptly
pulled away. They stood inches apart; the air crackled around them.
Their gazes locked. He opened his mouth, then shook his head and left
without a word.

A city girl, born and bred, I tend to place my stories in and around
southeast Pennsylvania, or at least have a character or two from the
area. Home is where the heart is and I make mine with my very own knight
in slightly tarnished armor, three beautiful daughters ranging in ages
from college through pre-school, and a grandson who arrived on my
birthday last year. When I’m not busy living my own happily ever after,
I’m writing about someone else’s.

Sarah’s Review:
Thanks to Becky Flade for reaching out asking for us to review. As soon as I read the blurb, I knew I wanted to read it.

I was instantly sucked into the story.  I love covert ops, black ops, anything that is similar.  There is something about the danger of the story line that makes the story more excitable.   I loved the characters chemistry and how they handled the situation.

I emailed the author and told her that the story left me with a “WTF?? feeling” but it wasn’t a bad thing.  She assured me that I wouldn’t be disappointed.