REVIEW: Hard as it Gets by Laura Kaye 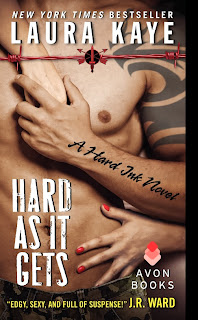 At the start of HARD AS IT GETS, readers find that
trouble has just entered into Nicholas Rixey’s tattoo parlor. Becca Merritt is
warm, sexy, wholesome—pure temptation to a very jaded Nick. He’s left his
military life behind to become co-owner of Hard Ink Tattoo, but Becca is his
ex-commander’s daughter. Loyalty won’t let him turn her away. Lust has plenty
to do with it too. With her brother presumed kidnapped, Becca needs Nick. She
just wasn’t expecting to want him so much. As their investigation turns into
all-out war with an organized crime ring, only Nick can protect her. And only
Becca can heal the scars no one else sees. Desire is the easy part. Love is as
hard as it gets. Five
dishonored soldiers. Former Special Forces. One last mission. These are the men
of Hard Ink.

Laura
Kaye
is the New York Times and USA Today bestselling author of
contemporary and paranormal romance. Laura grew up amidst family lore involving
angels, ghosts, and evil-eye curses, cementing her life-long fascination with
storytelling and the supernatural. Laura lives in Maryland with her husband,
two daughters, and cute-but-bad dog, and appreciates her view of the Chesapeake
Bay every day.
Kaye began writing romance after a minor
traumatic brain injury left her with an insatiable creative streak. As she
healed, she followed her new creative urges wherever they led—from guitar
lessons to fiction writing—completing her first novel in just 12 weeks. A
former college professor, archaeologist, and historian of early America, Kaye
likes to write sexy, heartfelt novels about men and women looking for—and
finding—second chances and a place to belong.
Today Kaye is the New York Times and USA Today
bestselling author of more than a dozen books of contemporary and paranormal
romance, including Hearts in Darkness,
Her Forbidden Hero, and One Night with a Hero. She finds
inspiration in everything from old family lore to her eight years of working as
a civilian employee for the United States military. She also published two
scholarly works of American history under her real name, Laura Croghan Kamoie,
before launching her fiction career.
Sarah’s Review:
I have been a fan of Laura Kaye for a while and I was excited when she shared the cover for this story.  Everything about the story line made me anxious for this story.  I love story lines about military, current and former.   Inked guys, even better!

Nick Rixey & Becca Merritt are put together because of Becca’s brother’s disappearance and Nick’s connection to Becca’s father.  That is just the beginning of the suspense of this story.  Since there is a second book coming out in February, on my birthday in fact, I don’t really know how to review this one!   Hopefully, I get the ARC.   The dynamics of Nick’s relationship with his team is amazing, especially after what they all went through.  The UST factor that Nick and Becca have and then when they realize that they actually have a chance was such a big factor in why I love this story.

Characters in this story have already made me look forward to more in this series.  Laura, I hope everyone is going to get their own story.  Becca’s brother has me intrigued and can’t wait to read it.  Nick’s teammates, oh PLEASE, I can’t wait for more interactions.  Nick’s brother, well, I might have a book crush on him!  Oh, Elaine, the three legged dog that Becca adopted, I can’t wait to see her again.