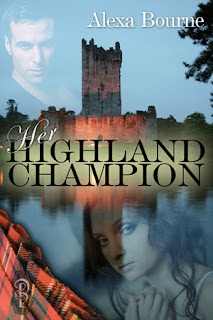 Heather Winchester leads a charming life. With good friends, a
beautiful flat in one of the most amazing cities in the world, and a
promising future once she finishes her Ph.D, she is finally pursuing her
own dreams instead of catering to everyone else’s…except she doesn’t
remember any of it.

Malcolm Fraser has returned to his Highland village to forget his
failings as a professional bodyguard. Believing he could just lose
himself in the mundane activities of running his bed & breakfast, he
finds a woman’s lifeless body by the loch instead….

Captivated by Heather as she regains her memory, Malcolm is thrown into
the line of duty. As danger comes knocking on their doors, will he be
strong enough to love her and keep her safe?

She turned to the bedside. A man stood there dressed in dark green
sweats, with both hands clenched around the silver bedside bar. He was
handsome, with light eyes, dark hair cropped close to his head, and a
firm jaw. It was his hands, though. They drew her attention. Clean skin,
defined knuckles, large fingers. Hands rough from a hard day’s physical
labor, and yet, she imagined, gentle enough to caress the afternoon’s
sufferings away.

“It’s good to see you awake.” He smiled. “You gave us all quite a fright.”

Okay, the Scottish accent drew her attention, too. At once, it
both melted away some of her fears and sparked a whirlwind of questions.

She swallowed hard. “Where is that?”

“Fort William.” He reached for something on the table by her bed and brought back a plastic cup with a straw. “Here.”

“Thank you.” The warm water coated her sore vocal cords. She handed the cup back to him.

Wait a minute. Fort William? The only Fort William she
knew was in Scotland. “I don’t understand. How did I get here?” Ignoring
the aches in her body, she pressed both palms to the sheets on each
side of her and pushed herself up. The blanket fell away from her chest
and a new chill surrounded her. “What’s going on?”

Her arms shook, and she collapsed back to the bed.

“Relax.” The man set his palm on her shoulder, as if to keep her
flat against the mattress. The heat of his fingers seeped through her
hospital gown and into her skin. “I found you unconscious on the beach
in Glenhalish. I called for an ambulance, and they brought you here.”

“Aye, on a three day tour of the Highlands. Do you not remember being there?”

“No.” She squinted and studied him. No memories surfaced. “Do I know you?”

He shook his head. “Only from the beach. I’m Malcolm Fraser.”

She opened her mouth and then closed it again. Her gaze drifted
to her lap as tears burned in the corners of her eyes. Panic swelled in
her chest and into her throat.

“What is it, lass?” he asked with such tenderness.

Alexa Bourne is a teacher by day and a romantic suspense writer by
nights, weekends, and all school holidays. She also teaches online
classes for writers throughout the year. She is thrilled to be writing
for Decadent Publishing and to have the chance to share her love of
Scotland with readers everywhere.


When she’s not concocting sinister plots and steamy love scenes or
traveling and exploring new cultures, Alexa spends her time reading,
watching brainless TV and thinking about exercising. She loves to hear
from readers. To find her, visit www.alexabourne.com or
http://alexabourne.blogspot.com, or follow her on Twitter @AlexaBourne.

Sarah’s Review:
Thanks to Decadent Publishing and Alexa Bourne for continuously bringing me stories that have me hooked within the first couple chapters!   Ms. Bourne’s stories are set in Scotland and I love it!!


I love that this story is a romantic suspense since I love them!  These two characters were fun to read, while it was just suspenseful enough that it wasn’t overbearing.   I also love that we got to see a couple characters from her other stories too.

I love the the heroine was a strong character despite having amnesia and that she wasn’t afraid to go after the hero!  Oh and the stubborn hero?  Yup, love that aspect!


This story really makes me want Ms. Bourne to write more romantic suspense stories!  I have become addicted to her Scotland settings and can’t wait to read more!