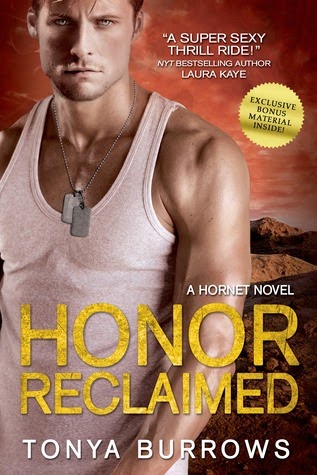 Former Marine sniper Seth Harlan is determined to prove that he can still do his job despite his ongoing battle with PTSD. When an old friend contacts HORNET to rescue a black ops soldier, Seth’s stability is strained. He knows all too well what it’s like to rot inside an enemy camp, praying for rescue and waiting for death. And he’s not about to leave a man behind.

Photojournalist Phoebe Leighton just stumbled into the middle of an arms deal. Teaming up with a ragtag team of mercenaries is the last thing she wants to do–especially when she realizes Seth Harlan is assigned to the mission. He may ignite a passion in her she thought long dead, but Phoebe’s hiding a secret that could destroy him.

With a bomb in the mix, HORNET’s mission is suddenly about a lot more than an abandoned soldier. Racing against the clock, Seth, Phoebe, and the rest of the team struggle to stop a ruthless warlord bent on power, revenge…and death.

I would first off like to thank Tonya Burrows for providing us with a review copy of this book for us to read.
This review is one of those that are so hard to write not because you didn’t enjoy the book, but because you enjoyed it so much you don’t know where to start. We are briefly introduced to Seth in the first book of this series Seal of Honor, but all we know about him then is how he’s got a past and no one wants to work with him. In this book Honor Reclaimed we find out what that past is and WHY he is so haunted by it.
Maybe because I now have friends who are deployed in Afghanistan or because I have learned in the last six months or so how much harder the life of a man in uniform is when they are away from home, but with this book I found myself so much more attached to Seth. I was able to relate him to someone I know personally, (actually it happened with a couple of the characters) and was aching to help him, hug him and take his pain away. I found myself crying along with not only Seth but Phoebe as well.
Phoebe has to learn a hard lesson before she can forgive herself, but she is such a strong character, one that makes it a pleasure to read. She is also willing to put herself at risk for those things she believes in and loves. She took a lesson from life and used it to turn her life around to a more positive place. Again I attribute this to how well written the character is.
Tonya Burrows did such a fantastic job with this book, I can’t wait to see what else she can bring us in the future in the HORNET series.
Happy Reading… Adri
Previous

REVIEW: The Professional by Kresley Cole

REVIEW: THE PASSIONATE LOVE OF A RAKE (MARLOW INTRIGUES #2)