REVIEW: I’ll Be Mated For Christmas by Rebecca Royce 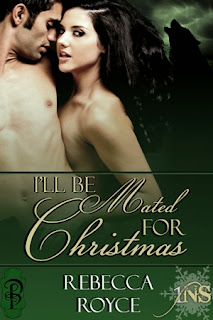 Bethany Johnson grew up one of the only humans in a pack of
werewolves. She didn’t have an easy time and her self-confidence was
almost non-existent. Finally, after some serious psychotherapy and the
help of weight-loss surgery, she is feeling like the Bethany she has
always wanted to be. But now she has to say goodbye to the werewolves
in her life. Out with the old and in with the new this year…

Luke Denarius is the new Alpha of the Delta pack. He’s never met Bethany
but the second he scents her he knows she is his. No way is she going
off to Italy for adventure and hot sex with other men.

With the help of Madame Eve these two will find that a mating is in the works for Christmas.

Bethany didn’t want to imagine what she looked like right at that
second. She didn’t like flying and she particularly didn’t like doing
it in a bush plane, even a private one with a very nice pilot. She
smoothed down her hair and tried to smile at the receptionist who signed
her in. To her left, she saw a man sporting a beard talking on the
phone in a private office. She wondered if that was Nick Castillo, who
ran the Castillo Lodge in Castle, Alaska.

Madame Eve had been downright mysterious when she’d e-mailed,
telling her to get some warm clothes together and something nice to wear
to a gala because she had to leave immediately for the Castillo Lodge.
She didn’t have any other plans, having quit her job, so it wasn’t a
problem. But still. It had been a little odd. Did Madame Eve handle all
of her client’s dates that abruptly?

“You’re all set, Ms. Johnson.” The receptionist smiled at her and
held out a key. “Down the hall is the elevator. Take it to the second
floor. Mr. Denarius is already here.

“He is?” She tried to swallow away the nervous lump in her throat.

“Yes, ma’am. He arrived quite early this morning.”

“I see.” She hoped the receptionist didn’t notice her sweaty
hands as she took the key. She had been counting on being there first.
It would have given her some time to relax, take a bath, and make
herself look somewhat presentable before she had to face her date.

As if in a daze, She walked toward the elevator. What had her so
spooked? This was exactly what she wanted. One night with a stranger who
could fulfill all of her yearnings. She’d get it out of her system and
then she’d go on to Italy the confident, capable woman she knew she
could be.

Lucian Denarius constituted a means to an end. Maybe he’d be a
nice guy who she could see again someday if the situation presented
itself. She shivered at the name. Madame Eve hadn’t sent his picture in
the e-mail, but the name alone inspired all sorts of ridiculous
fantasies for her. He sounded mysterious.

Author Bio
As a teenager, Rebecca would hide in her room to read her
favorite romance novels when she was supposed to be doing her homework.
She hopes, these days, that her parents think it was worth it.

She is the mother of three adorable boys and she is fortunate to be
married to her best friend. They live in northern New Jersey and try not
to freeze too badly during the winter months.

She is in love with science fiction, fantasy, and the paranormal and try
to use all of these elements in her writing. She’s been told she’s a
little bloodthirsty so she hopes that when you read her work you’ll
enjoy the action packed ride that always ends in romance. She love to
write series because she loves to see characters develop over time and
it always makes her happy to see her favorite characters make guest
appearances in other books.

In her world anything is possible, anything can happen, and you should suspect that it w

Bethany is a
strong woman who is about to take the ultimate leap and say goodbye to
everything she has ever known. She feels it’s the only way to begin anew
and to be honest, who has time for werewolves in their life? Certainly
not Bethany. But one last fling thanks to Madame Eve is just what she
needs to send her off .

From the
moment Luke walked in to Bethany’s family’s home, he was overpowered by
her scent. He had to have her and there was nothing that was going to
stand in his way. She was his mate….for life. She just didn’t know it
yet. But can Luke get her to understand that running sometimes isn’t the
answer and she has family, and a mate, for as long as she’ll have them?

Madame Eve is up to
her old tricks again and this time, she must help Luke try to stop
Bethany from leaving. The thought of her with another man sends Luke in
to a frenzy and he is determined to make that one night count and does
he ever.

The two have an
unforgettable night and Luke’s proposal is the icing on the cake. But
can it work? Is she ready to be “mated” for life? The choice is still
hers, she can walk away. She can have her independence, her freedom. Or
does the longing for family win out and the chance to have a man love
her unconditionally draw her back in to the fold. Sometime starting over
brings you right back home…..right where you belong, in the arms of
those that love you.

A beautiful story of
starting over, struggling self image and learning to accept that people
will love you for you, no matter what’s on the outside. Great story to
start out the New Year !