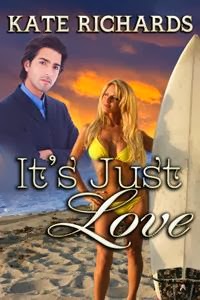 Blurb: Coral Nixie is living her
dreams. Her cottage is blocks from her beloved beach and a haven for those
seeking answers for their relationship problems. And so what if her own love
life is non-existent? Helping others and surfing should be enough for anyone, even
a virgin, slightly lonely witch.
Gage
Middleton is a successful author and relationship counselor. His “Factors” can
indicate the success of any relationship, and he’s about to propose to his own
perfect match. Until Ms. Perfect dumps him, and he has to go on TV and defend
his theories against a ridiculous, hippy witch with the most beautiful eyes.
On
a dare from the host, the two set out to follow another couple on their first
three dates. The man and woman they follow have nothing in common and neither
do they. Can they let go of their own stubborn beliefs and accept that there’s
nothing to prove in the midst of their own attraction? After all, It’s Just
Love.
Excerpt: Coral woke early, despite the fact that Gage had
stayed into the wee hours. He’d been happy to discuss his work, but reticent
about his girlfriend. Perhaps the perfect 10 was displeased about their
spending these three evenings together. Coral would be happy to reassure her
that she had no designs on him. A stuffed shirt like him did not enter her
sights. Of course not.
She recalled her decision to consider dating again. Sid was
dead, but she was alive. And he’d never want her to live sad and lonely. He had
been a kind, considerate guy, finding joy in so many small things. Nothing had
taken that from him, even toward the end, when he became a frail shell of his
former, robust self. Shame filled her. She’d promised to move on, sworn it as
she sat by his deathbed. And she’d broken that vow, or at least neglected it,
for three years.
Well, no more. She would begin dating immediately. She’d
find someone…somewhere. There sure as heck was nobody in her life now. Filled
with purpose, she eschewed surfing for the day and prepared for a small ritual.
Time to close one door, so another could be opened. The Goddess could not give
her anyone new as long as she clung to the past. And three years was long
enough to grieve for someone who had not even been a lover. He’d wanted that,
but she hadn’t been sure, and by the time she realized how much he meant to
her, his health was so poor she’d only been able to give him her time and care,
nothing more.
She closed the curtains, swept the living room, and
feather-dusted, wanting a clear space. Then she showered and patted herself
dry, leaving her hair hanging down her back, and returned to the living room.
Lighting a single, white taper, she sat cross-legged on the floor. White for
the Goddess, white for purity. Staring at it, she stood and lit a green one,
for change. Once upon a time she would have done more preparation, but truly
what occurred was inside herself, and the rest were trappings for onlookers.
The Goddess would understand. Staring at the twin flames,
Coral went deep inside and made a wish and a promise. This time, a gift would
not be rejected. “Whoever you bring me, Lady, I will not waste the time. I know
now how precious and rare true love is.”
When the candles burned down and winked out, she was filled
with peace. Perhaps it would be a surfer, or maybe one who practiced the
craft…or maybe an accountant. But she trusted that it would be the right one
for her, if indeed such a person existed. A flicker of doubt passed through
her. If she hadn’t missed her chance.
And looking for the right man would distract her from the
wrong one she would be spending the evening with. Gage Middleton, handsome and
charming…and even gallant, but he was not for her. The attraction was merely
bad timing, or maybe it served to wake her up to her need to move forward.

Thanks to Beachwalk Press and Kate Richards for this great story.  BWP posted on their FB page that they had a giveaway going and I didn’t have this book yet.  Anyway, I won the giveaway, so I thought I could thank Kate and BWP by doing a review!

If you are friends with me on FB, you know my time reading has been drastically cut and I am lucky to read 1-2 chapters a day.  Kate was so understanding with the simple fact that it was taking me days to read this one.  Normally I can read a novella in a couple hours, but this one took me 6 days.  It would have taken me longer but I forced my self to finish it after class last night (9/21).

I really enjoyed these characters.  There was something  about Coral and Gage that I liked.  I like that they were so different and was looking forward to Gage getting knocked down a peg or two.  At first I thought he was an arrogant man who thought he was always right.  However, after being dumped by “his perfect 10” I felt bad for him,, after I laughed at him.

I love that Coral was able to knock Gage on his butt, metaphorically speaking!  I also enjoyed that she had a connection with someone that had a connection with Gage.  While I was reading it, I often wondered if that person pushed them together.  Do you want to know?  Read this story!!  I also thought that what was happening was being viewed in the wrong perspective and I was right on some parts!

There were a few things that were different for me, but it truly worked for this story.