REVIEW: Marine with Benefits (Always a Marine 16) by Heather Long 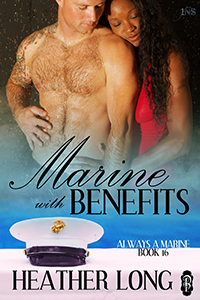 Marine with Benefits
Always a Marine #16

From cradle to grave, Derek and Keith grew up together, enlisted,
served, and rose through the ranks together. When Keith died in the
field, the last thing he asked for was Derek to keep watch over his
sister. But every time Derek is around Kara, he wants to touch her. A
promise stands between them and he refuses to seduce his best friend’s
baby sister. Determined to get her out of his mind, he signs up for a
one-night stand.

He’s the one she wants…

Ever since Kara ran into a shirtless Derek, she’s known he was the
one. He promised to bring her brother home and he was there for her at
his funeral. But he remains unattainable, no matter their chemistry.
Frustrated, she takes a girlfriend’s advice and signs up for a one-night
stand.

The last person they expected…

Dressed to kill, Kara doesn’t know whether to scream or cry when
Derek turns out to be her date. He’s furious that she’d sign up for a
night of sex with a perfect stranger, but together their reunion is
combustible and neither can deny the power of their attraction.

He may have been her brother’s best friend, but she wants him to be her Marine with Benefits.

He needed to get it together. Tonight was about purging demons and
having a good time. When the waitress delivered his jack and coke, he
swirled the ice around in the glass, watering down the alcohol. An icy
hot shiver skated over his skin. Twisting in the seat, he looked toward
the entrance in time to see her walk in the door. It was like every cell
in his body leaned in her direction, drawn by the inexorable force of
nature that was Kara Childs. He’d know her anywhere.

Steel bands squeezed his chest, compressed his lungs, and bruised his
heart. She was gorgeous. A red dress hugged her luscious curves, too
much so. His dick stood at attention without a second thought for
courtesy, commitment, or promises made. And damn if she didn’t make an
entrance, her arrival captured more than a few looks of interest from
the single men at the bar and a few not so single men at the tables.

Rising, he crossed the room toward her. The moment her gaze collided
with his, heat flashed through him. She had no business being out in a
dress like that much less in a club like this.

“What are you doing here?”

“I planned on asking you the same question.” He caught her arm and
turned her around, not quite hurrying her back up the red-carpeted steps
toward the front door. “And why aren’t you wearing some damn clothes?”

Kara stopped, and unless he planned on picking her up or knocking her
over, he had to stop, too. Although, he had to admit the former idea
held a certain appeal. “Let go Derek.”

“You shouldn’t be here.” He kept his voice low and leaned into her.
The scent of plum and flowery blossoms in the soap she favored smelled
like coming home.

“Really?” The cold spray of her gaze flicking over him cooled his ardor. “I live here. What’s your excuse?”

“I’m moving here—moved here.” Yeah, not how he planned to drop this
particular bomb.  And from her shocked expression, not one she expected
either. “I planned to call you,” and it was a little to late to
apologize. “After I settled in.”

Her chest rose with her swift inhale and his gaze dropped to the warm
curves of her breasts visible above the strapless line of her dress.
That dress was made for her. His cock jerked in his pants and he was
grateful for the lower illumination near the door.  “Well, thanks for
the notice.” She turned away from him and surveyed the room beyond. “If
you’ll excuse me, I have a date.”

Violence rocketed through him. “With who?” He didn’t even realize he gritted his teeth until he tried to speak.

“With a gentleman called none of your damn business,” she tugged her arm out of his grasp.

Flushing hot and cold and then hot again, he moved to stand next to
her and studied the room. Who the hell was she meeting in a place like
this? How did she even know a bar like this existed? Keith’s baby sister
did not belong in a club like this. “Who are you here to see, Kara?” He
bent his head, his lips damn near brushing the warm curve of her ear
and half tempted to kiss it while he was there. Locking down that urge,
he ordered his body to knock it off.

She was—and had always been—way out of bounds.

Thanks again to Heather Long and Decadent Publishing for owning me with another amazing Marine story!!  I am sad that this will be the last Marine until November-ish.  However, this was a great way to wrap up the summer releases of Heather’s Marines.


Kara is the sister of Keith, a fallen Marine and works at Mike’s Place.  Derek is Keith’s best friend and has been in love with Kara for years.  Derek has relocated and will also be working at Mike’s Place, though Kara doesn’t know that.  Both of them sign up for a 1NS through Madame Eve.

What happens when Kara runs into Derek?  What about when she finds out that he is her date?  Pure explosive awesomeness.  I can’t say much more than that without giving stuff away.