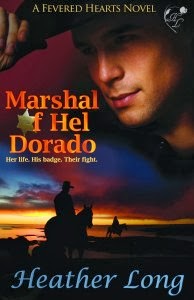 Add this book on Goodreads

“The Marshal of Hel Dorado is like X-Men and Young Guns wrapped up
with not one but two families full of hot brothers to lust after.” – Cat Johnson, author of Hooked.

In the shadows of the Old West, that untamed land, live bands
of outlaws and outsiders. In a time when fevers could fell whole towns,
these few survivors are marked. Marked…and forever changed.

Sam Kane is the oldest brother, the steadfast son and
the confident marshal.  He’s never met a problem too hot to handle until
a gang behind a string of robberies across the territory set their
sights on his town.  Now with the bank’s gold inexplicably missing from a
locked safe, the town hunting the elusive thieves and a passionate
redhead with a fiery secret in his jail, Sam has his hands full.

Scarlett Morning Star lived in seclusion in the mountains of West
Texas most of her life.  She longs for adventure, but with seven very
protective older brothers, adventure is hard to come by.  When she tags
along uninvited on their latest escapade, she is left behind during a
bank robbery and finds herself in the custody of the very sexy town
marshal.

The town wants to lynch her, the Marshal wants answers and her
brothers want her back, can Scarlett keep it together or will her
explosive secret burn them all?

Her life.  His badge.  Their fight.

Excerpt
Sam stalked inside the cave, water rolling off
the brim off his hat and dripping down the sides of the horse he led inside. He
dropped the reins and pounced her before she could go for the gun.

Water from his oil coat soaked through her
britches and undershirt as he plucked the gun from the holster. She scrabbled,
but he was already flipping her over, sitting on her abandoned rock. She landed
on her stomach, across his knees. She turned her head, glaring up at him.

She yelped as his hand landed on her backside
with a stinging slap.

The second slap wrung tears of surprise and
outrage from her eyes.

“That’s for hitting me.”

The third set her lower lip trembling as a fire
of tingles burned through the numbness of her backside.

“That’s for charming Micah into letting you keep
going.”

By the fourth slap, Scarlett’s cheeks burned in
humiliation and fury.

“That’s for taking my damn gun.”

He stood, dumping her onto the rock floor in
front of him before retrieving his gun and going to his horse. Her ass stung
worse than the time Wyatt had switched her for nearly burning down the
outhouse.
With Wyatt in it.

Sam stripped off the horse’s gear, rubbed him
dry and pulled out a pouch of feed from his saddlebags. She eased over onto her
side, careful to not sit. Her bottom protested even that little movement. It
took Sam minutes to feed both horses and then he was turning back to her,
walking over, and reclaiming the rock to sit on.

Even in the half gray light of the cave she
could read the thunderous look on his face, the tightness to his jaw, the
outline of a bruise on his cheek and the red lump swelling just below his
hairline. He opened a canteen, a twin for the one that Micah passed off to her,
and held it out to her.

“Now, you were going to explain…”

Adrianna’s Review
What can I say, other than
this is an amazing story. Heather Long filled it with so much, that it’s hard
to pinpoint the best place to start with. Not only is this story, an amazing
romance, but I would also categorize it as mystery, action, paranormal,
passionate and heartwarming. You are cheering for the characters from the
beginning. When I first began to read the story, I had a little bit of trouble
getting through the first few pages, but that’s not Heather’s fault or does it
take anything away from how wonderful the story is. The fact that it is a
historical time piece and it needed to be set up properly is so incredibly
important, but I was anxious to get past that and to the “meat and bones” of
the story. Another thing about the beginning of it is that you need to make
sure you pay close attention to it, as it comes back to the point of why it’s
there later on.
This story is so full of
wonderful supporting characters that even thought I know it could survive
without them, I feel it wouldn’t be the same if they weren’t there. Where the
main characters of Sam and Scarlett are definitely strong and have great
interaction together, their brothers help round out the story perfectly. Of all
the brothers the one we least know about and the one that I want to know most
of, of course is Wyatt, the dark, scary brooding brother. My heart aches for
Kid, the one that sorrow forgot, where Sam and Micah feel that he’s been
spoiled, it’s easy to see that, that’s not the way Kid feels about it. Cody is
also one of the more lovable, like you want to curl up and cuddle with,
character, even with his mean streak. Micah is that character that brings the laughs,
that one that without him the tension would drown you, he’s that guy you want
with you when you’re scared or nervous will do anything and everything to
distract you for it. There are others, who each have an important, smaller,
roll in the story, but these four are the ones that stuck out most for me.
Now let’s talk about Sam and
Scarlett… Wow, the attraction between these two is incredible, from the moment
they cross each-others paths you can feel the withheld passion between them.
The sassy, take no crap attitude that Scarlett has is such a fresh of breath
air. The fact that even though she grew up with eight men and no female
influences really shows in the way she interacts and shows strength throughout
the possible outcomes in the story. She sure keeps Sam on, his toes, that’s for
sure… And Sam, our rigid do things right and by the book Marshal, his life gets
twisted and turned upside down thanks to the fiery redhead that comes into his
life. He shows such growth and development, he shows how he/anyone can change
with the right motivation. He’s also very protective of his family, town and
those he loves. The two play off each other with the perfect amount of
seriousness and playfulness.
What gives this story its
paranormal feel I will keep a mystery, why? Because I want you to go out and
get the book and find out for yourself… but trust me when you find out with it
is, you will want to have the ability to do it too…
I hope you enjoy reading
this as much as I did… Oh and just so you know there are more books in this
series, which I plan on reading and reviewing in the future.
Happy Reading… Adri
Previous