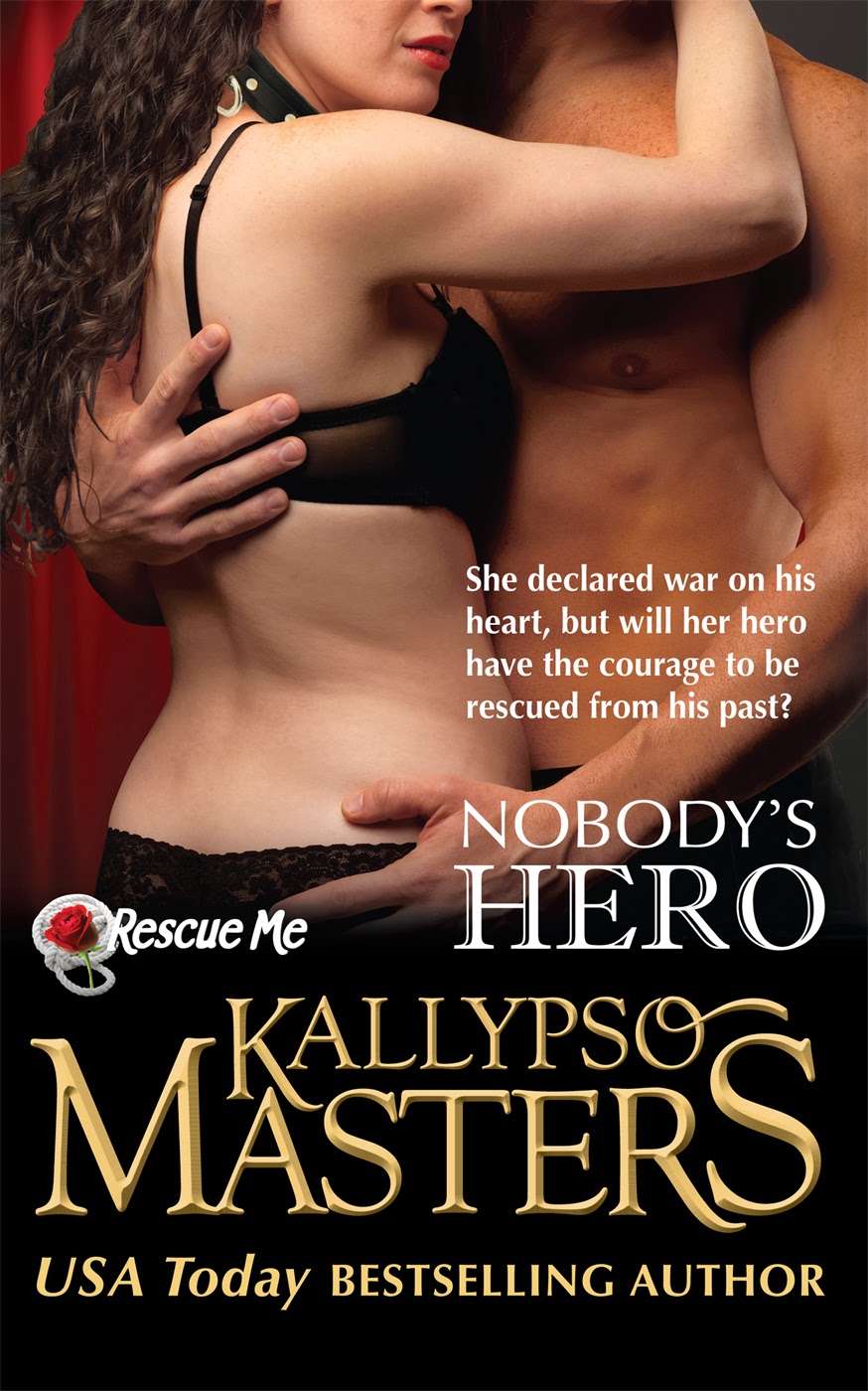 NOBODY’S HERO is the continuing romantic journey of Adam and Karla, which began in MASTERS AT ARMS and continued in NOBODY’S ANGEL.

Retired Marine Master Sergeant Adam Montague has battled through four combat zones, but now finds himself running from Karla Paxton, who has declared war on his heart. With a significant age difference, he feels he should be her guardian and protector, not her lover. But Karla’s knack for turning up in his bed at inopportune times is killing his resolve to do the right thing. Karla isn’t a young girl anymore—something his body reminds him of every chance it gets.

Their age difference is only part of the problem. Fifty-year-old Adam has been a guardian and protector for lost and vulnerable souls most of his life, but a secret he has run from for more than three decades has kept him emotionally unable to admit he can love anyone. Will she be able to break through the defenses around his heart and help him put the ghosts from his past to rest? In her all-out war to get Adam to surrender his heart, will the strong-willed Goth singer offer herself as his submissive—and at what cost to herself?

The books in the Rescue Me series are not stand-alone stories. Should be read in order.

CONTENT WARNING: This story might cause triggers while reading. Please read the Author’s Notes at the beginning of the book before purchasing.

Where you can purchase… Amazon

Karla smiled, then whispered, “Try me, Adam. No, even better, tie me. I want you to tie me up again.”
“Karla…”
“If you won’t, I’ll ask Damián to train me for you.”
Like hell. He’d have to have a talk with Damián PDQ to make sure he didn’t touch her. She wasn’t going to coerce Adam—topping him from the bottom and trying to control or direct him. If she wanted him to be her Dom, he’d…
How could he convince her she didn’t want anything to do with this? She might want him to restrain her with ropes, but he was certain submission wasn’t a deep-seated need for her. It wouldn’t take long for her to realize that.
Well, maybe he just needed to speed up the process a bit—to show her how much she’d hate taking orders, even from him. Sure, she liked restraints, but she hadn’t experienced discipline yet. Hell, if she’d seen the orgasm-torture demonstration he’d done on Grant in the medical theme room at the club—showing an inexperienced Dom his technique for multiple, back-to-back forced orgasms—she’d change her naïve view of BDSM. All she ever saw was what went on in the great room while she was performing.
Remembering how pissed Grant was, he realized he’d have to make sure he didn’t mess around when it came to restraining Karla for a punishment session. Grant would have kicked the shit out of his balls and dick if she wasn’t strapped to the table as well as she had been. He valued his private anatomy and his life too much to mess with her. But Karla also had some serious martial-arts training before college, judging by her moves earlier on the patio.
What he needed to do was make being a submissive sound like the most onerous thing in the world to her so she wouldn’t want to have anything to do with pursuing a BDSM relationship with him. He knew exactly how to do that.
Adam grinned. Hell, when he was finished spelling out the details of his proposition, she’d steer clear of any Dom who ever came near her in the future looking for a sub.
Karla waited, her fingers playing with his nips. God, they were hard. She wanted to remove his shirt, bend over, and bite one, but didn’t want to break his train of thought. Was he going to let Damián train her? She hoped not, because it would be extremely uncomfortable for her to submit to a man who wasn’t much older than she was. Someone she thought of as more of a brother.
“You will address me as Sir, Master, or Master Adam at all times.”
Karla’s heart thumped against her chest. He was agreeing to train her? Wow. Where had that come from? Who cared? She smiled.
“Yes, Sir.”
“If I tell you to jump, the proper response would be ‘How high, Sir?’”
She knew Adam wouldn’t ask her to do anything she didn’t want to do. Besides, she could do anything for the short-term. How long did scenes last? An hour or two at most? The thought of having Adam’s focus on her for that long sent a thrill through her body.
“Yes, Sir.” Her breathy whisper sounded sexy even to her ears. She hoped it sounded that way to him, too.
“I will tell you when and what to eat, when to dress, what to wear, when and where to kneel, sit, lie, or stand. You will focus all of your time and energy on pleasing me because, as a submissive slave, meeting your Master’s needs and wants is the only thing that will bring you pleasure and satisfaction.”
What did he say? “Slave, Sir?” Wait a minute. Who said anything about slave? She just wanted to play at being submissive. More to the point, she just wanted to play with Adam.
Kallypso Masters Website http://kallypsomasters.com/
Adri’s Review:
This is the third book in Kallypso Masters Rescue Me series. If you’ve been following this blog for a while you know that I reviewed book 1 Master at Arms & 2 Nobody’s Angel for Veterans Week. With Monday’s been dedicated to our men and women in Uniform how could I not use the next three Monday’s to review the three books that are currently published…
In this installment we focus on Master Adam and Karla’s story. Though it is their book we don’t lose or forget the other characters. But after the attack that left Adam injured at the end of Nobody’s Angel, Karla works hard to show him how much she is there for him. She is willing to accept his lifestyle, but could she give him the things that Jodi his deceased wife gave him? Also will Adam be able to the age difference aside enough to give them a chance?
The thing about this book is the emotions, as well as the growth and changes made by both characters. Adam starts to see that his feeling for Karla are more than just those of an older brother, he doesn’t know how to deal with that. He partly feels as if he should be take on more of a parental role with her, and partly hates himself for not seeing her that way.
I enjoyed seeing Karla finally getting the man that she’s always seen as her hero. The man that not only saved her from harm at the age of 16, but also was there for her after she lost her brother.
Look for the other books to be reviewed within the next two Monday’s. And I hope you read the previous two books before diving into this one.
Happy Reading… Adri.