On the 12th Date of
Christmas
Nikki Lynn Barrett 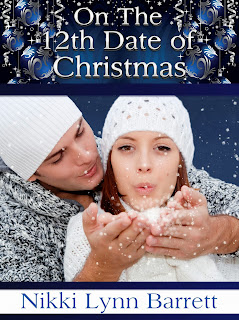 Blurb:
After being mugged, Robin Sorenson is left shaken and her
spirit in humanity is broken. Worse, she’s not sure how to deal with the new
anxieties or who to confide in, since she’s always preached to pick oneself up
and move on. Yeah, she’s been the go to girl when anyone’s had problems.
Christmas is coming, and her belief in magic and miracles has faded.

Then Jonas comes back.

Jonas Aimes made a mistake when he walked away from Robin a year earlier. A big
one. He’d loved her, always had and still does, but his desire to please his
aging and strict parents took precedence. Back from the overseas internship
they’d struggled to get him in, he plans on winning Robin back. What he didn’t
count on was discovering the shell of the vivacious woman he’d loved.

Remembering her love of Christmas, Jonas pulls the holiday heartstrings. What?
All is fair and love and war, right?

Robin is speechless when Jonas not only refuses to leave her alone, but dares
her to accept his cheesy holiday-themed challenge. Twelve dates to give him a
chance to prove that he loves her and is never leaving her again.

But in the season known for miracles, can Robin find the magic needed to open
her heart and faith once more … or will she forever wonder about the ghost of
the Christmas past that could have been?

Excerpt:
She didn’t
expect the sincerity in his voice. He watched her with those gorgeous dark eyes
that never turned away from her face. She knew he meant business.
A smile lit up his face.
“Give me twelve dates.”
Robin raised an eyebrow.
“Twelve dates? What are you talking about?” Now he was just acting
strange. Kind of cute, but definitely strange.
“Twelve dates to show you
just how much you mean to me. On the twelfth date, if you don’t feel like we
could at least try to work things out, I’ll leave you alone. If I don’t at
least give this a shot, then I’m going to have a lot of regrets.”
“Twelve dates, huh? You
seriously sound like someone from one of those cheesy films they air this time
of the year.” Okay, this man looked and sounded like Jonas, but his twelve
dates idea made her wonder what happened to the real Jonas Aimes. Robin shifted
in her seat and narrowed her eyes.
He feigned hurt. “Cheesy?
Ouch. That’s a blow to the heart.”
“Twelve dates isn’t a long
time to decide.” He was being serious about this, wasn’t he? Twelve dates?
How in the world did he plan to try and show her anything with only twelve
dates? The idea sounded cute, charming and sweet, it really did. But how did he
plan to pull it off?
“Maybe for people who don’t
have our history. But we’ve known each other since high school. Come on, what
could it hurt?”
A lot, actually. She
kept the words to herself.
Despite it all, she couldn’t hide her curiosity.
“Of course, we can talk and spend time together outside
of the twelve dates, so it’s not like we’re limited,” Jonas continued. He
circled her palm with his thumb. “Oh and right now doesn’t count as one of
the dates.”
Robin laughed. Butterflies danced around in her belly. Good
grief, what happened to her promise just a few hours ago? To focus on her own
life and not get wrapped up in a man?
Okay, just because I agree to this doesn’t mean I’m changing
my mind. They’re just dates. Dates with a man I love, but they’re still just
dates.
“What about your family? What will they say?” she
blurted.
A storm of anger built up in his eyes. “I don’t care
what they say anymore. My family shouldn’t have so much sway on how I feel
about you. I should have realized that a long time ago. They don’t get to
choose anymore.”
Sarah’s Review:
Thank you to Nikki Lynn Barrett for providing a copy of this story to feature as part of our Christmas Romance feature that this blog has been doing for December.  This is the second story that Nikki Lynn Barrett provided for us to review for her.   We met Robin in Secret Santa Wishing Well as she is the babysitter for Cheyenne.  We had heard about Jonas but we didn’t get to meet him until this book.

I don’t know how to review this one, other than I enjoyed the idea of Jonas having to work to get Robin back.  When Robin agrees to dinner with Jonas after he runs into her, she discovers that he has returned and is resolved to winning her back.  He asks for 12 dates, and she agrees.

We find out some of Robin’s history, what happened to her during the time that Jonas was gone and how she becomes stronger.  We learn about why Jonas left and why he came back to fight for Robin.

We also got to see how Jacob, Cheyenne, Ben and Desi were doing.

REVIEW: In Your World, Book 2 Renewing Hope by Jennyfer Browne

REVIEW: A Lesson In Thorns by Sierra Simone

REVIEW: From the Shadows by L.J. Stock