REVIEW: Once in a Lifetime (Lucky Harbor #9) by Jill Shalvis 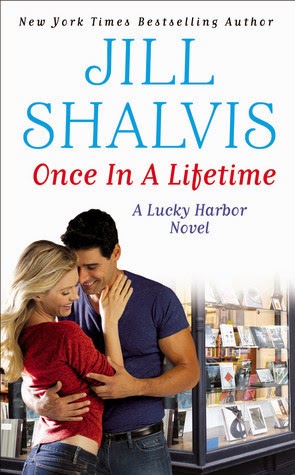 After
a wrenching loss, Ben McDaniel tried to escape his grief by working in
dangerous, war-torn places like Africa and the Middle East. Now he’s
back in his hometown and face-to-face with Aubrey Wellington, the
hot-as-hell woman who is trouble with a capital T. Family and friends
insist she’s not the one to ease his pain, but Aubrey sparks an intense
desire that gives Ben hope for the future.

Determined to right
the wrongs of her past, Aubrey is working hard to make amends. But by
far, the toughest challenge to her plan is sexy, brooding Ben – even
though he has absolutely no idea what she’s done . . .

Can this unlikely couple defy the odds and win over the little town of Lucky Harbor?

Sarah’s Review:
Thanks to Netgalley for providing the ARC to this great story!  I am a huge fan of the Lucky Harbor series.   I love when we get a new set of Lucky Harbor characters, especially since they come in three!

Ben is the third in this set of characters, but his story was the one I was most looking forward to.  Through out Jack and Leah’s story, I was hoping for more Ben and was looking forward to it.  There was something about Ben that made me want to know more.  In this book, Ben is definitely not what he seems to be.  Ben is one of those characters that you see the side that he puts out for the public, but when you see the other side of him, it makes him impossibly more sexy!


We met Aubrey in Ali and Luke’s story but she was a character that I disliked a lot until this book.  Once I started reading her story play out, I began to regret how I felt abut Aubrey.  I think that she made some dumb decisions but some people won’t let the past go.  I could relate to Aubrey on that aspect and was so happy when she decided to try to make amends for her past misgivings.


Oh, I swear Jill Shalvis write Lucille based on her own antics, especially Lucille getting banned from Facebook for her posting images!  That made me laugh loudly!