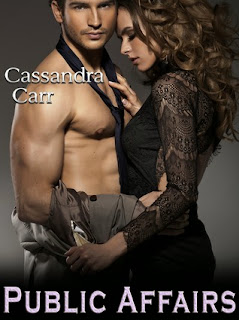 Nate O’Halloran is a PR superstar, an expert in crisis management
for his image-conscious celebrity clients. When his college roommate,
now a hospital director in Buffalo, calls to beg for his help– a cancer
researcher on staff has disappeared with millions of dollars’ worth of
government research funds– Nate agrees to help right away, though this
situation is pretty small potatoes for him.
Val Chase, the hospital’s PR director, is none too thrilled when
Nate shows up; does it mean her boss doesn’t trust her to handle this
mess herself? Against her better judgment, Val decides she and Nate have
to work together to save the hospital’s reputation, though the
explosive attraction they feel is making any actual “work” difficult…
Excerpt: Dueling feelings of nervousness and anticipation warred within Val’s
body as Nate parked his car alongside hers then came around to open her
door and help her out. She wasn’t accustomed to this kind of chivalry
and it was keeping her off-balance. It was especially unexpected in a
man like Nate, and made it harder to keep to her assumption he wasn’t a
man she could have a future with.
He’s only in town for a little while. Cool your jets.
Nate didn’t let go of her hand and Val felt strange tugging it away. He
closed the car door behind her and gently pushed her against it,
trapping her between his car and himself. “I have to,” was all he said
as his mouth descended on hers. She couldn’t bite back a gasp of
surprise, and Nate took that opportunity to push his tongue into her
mouth, exploring her with long, deep strokes. Val’s entire body started
to tingle and, despite her myriad misgivings, she found herself pulling
him closer and snaking her arms around his neck.
Her senses went haywire with each touch of his fingertips to her face.
Leaning in more, he pushed his erection into her pelvis and Val let out
an involuntary moan. Nate licked at her mouth with his wicked tongue and
she couldn’t help but respond, opening her mouth farther to his
advances. But when he reached down to cup her bottom in his large hands,
she finally had the presence of mind to jerk away, gasping for
desperately-needed oxygen. If he’d already gone from merely kissing her
to grabbing her ass clearly he wanted sex, and she wasn’t the type to
sleep with someone and then say sayonara. I might be for this guy. No.
Nip it in the bud, before he gets more ideas.
Despite her body screaming in protest, Val pushed him farther away. “We can’t do this.”
“Why the hell not?”
“Because.” At his raised brow she huffed. “Because we’re working
together. Because we’re in the parking lot of the hospital that I still
have to work in after you go back to your life in mere days.” She
motioned in his general direction. “Most of all, because you’re who you
are and I’m who I am.”
He ran his hand over the back of his neck and then looked at her, blowing out a loud breath. “What does that even mean?”
Val scooted around him and he turned to follow her. She held up one hand
and he stopped. “I need to go.” Ducking into her car, she started the
engine and was on her way out of the parking ramp within seconds. As she
pulled out onto the road she rapped the heel of her hand on the
steering wheel. “Dammit! Why did I let him kiss me?”
Buy Links
Amazon
Barnes&Noble
Smashwords
All Romance E Books
Erin’s Review
Cassandra Carr does it again with Public Affairs! There was the right amount of everything in this book and I swear you could cut the sexual tension between Val and Nate with a knife! You want to hate Nate, he’s invading our girl’s space. Can’t let that happen, you know, girl power and all that. But, you can’t. You want to scream at Val, “If you don’t make a move I will!” The power struggle between them during working hours is a form of foreplay for the couple, all leading up to some hot steamy after hours, um, togetherness….you get my drift.
The plot doesn’t overpower the romance and it keeps you intrigued as to what’s going to happen next. I really felt for Nate’s college buddy, Doug. He was a very real example of accountability. I loved Val’s emotional ties to her job, and Nate’s willingness to help out an old friend. Nate is the kind of friend anyone would be lucky to have, and Val is a kind, caring woman that will go above and beyond for those she holds dear.
Wonderful story of what could happen when you throw caution to the wind and let fate take it’s course.