Master at Arms and Nobody’s Angel by Kallypso
Masters 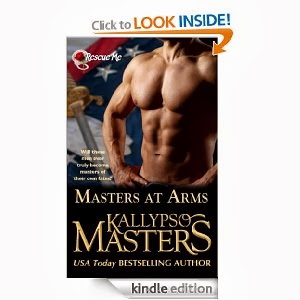 The first of the two I am reviewing today is Master at Arms.
The intro to the Rescue Me Series…
EXCERPT:
Savannah’s clit
throbbed. Please, touch me again. She’d never asked a man for what she wanted
and couldn’t start now. She should have helped him take off his jeans, but had
been so lost in the sensations of his hands and mouth on her body, all
functional thoughts had left her brain.
Expecting him to take
them off himself now, she was taken aback when his head bent toward her pussy.
She tried to close her legs, then gasped at the friction of the bandages
against her raw skin.
He leaned back and
looked up at her. “Did I hurt you?”
She shook her head. It
wasn’t his fault. Still, he mustn’t look at her there. She felt heat rise in
her face. Shame. But he continued to hold her legs open wide. Waiting.
“Please, let me taste
you.”
Savannah felt her face
grow hotter. He was begging? How could she deny him? No one had ever asked
before. It was dark in here. He wouldn’t be able to see. She nodded her head
and watched as he smiled, then lowered himself to her again. When his tongue
flitted against her swollen clit, all thought receded. Her pelvis surged toward
his mouth.
“Ohh!”
Empowered, he took his
finger and wet it against the opening of her vagina, then plunged inside her in
one strong stroke. “Yes, Damián! Oh, Lord, yes!” The combination of his tongue
and finger were delicious. Then another finger joined the first and he moved
them in a “come here” motion that was her undoing. An odd pressure built inside
her making her feel she could fly. She bucked against his hand and mouth,
simulating intercourse. No, more like lovemaking. There was a difference, she
was discovering.
She couldn’t hold back. When would he enter her? Then his lips were gone and
she felt his eyes on her as his fingers began to plunge in and out of her.
“Explode for me, bebé. Don’t hold anything back.”
His tongue returned to
draw gentle circles against her clit and she came undone. Her screams of
ecstasy crashed against the walls of the cave as wave after wave of pleasure
rolled over her. She held his head to her, pulling fists full of his hair free
of his queue, not wanting the moment to end for anything. But it did. Tears
spilled from her eyes. The intense beauty of the orgasm left her feeling
fragile. Wanting more.
Feeling lost.
Then Damián stood and
removed his jeans. She watched his penis spring loose, large and erect. Oh,
Lord. He’d never fit inside her.
Propping himself on his elbows, he pressed his body down against her chest.
Smothered. She couldn’t breathe. “No!” She pushed him off her chest, gasping to
fill her lungs.
Breathe, Savi. He
doesn’t want to hurt you.
She opened her eyes.
Damián looked down at her and brushed her hair away from her face. “What’s
wrong, querida?”
Oh, God. She didn’t want him to stop. And she didn’t want to explain why she
couldn’t have him on top of her. “I need to see your face when you make love
with me.”
He smiled and propped
himself up on his hands. Lord, he was so beautiful. He pressed his erection
against her sensitive clit. She pulled his face toward hers and met him
halfway, kissing his full, wet mouth. Unlike their kiss on the beach, this time
she tasted herself on his lips. How strange. He plunged his tongue into her
mouth and she felt his penis throbbing against her clit, which responded in
kind. Her nipples tightened and budded.
He pulled back, propping
himself on one hand. The veins in his arms bulged as he took his penis and
rubbed it up and down against her wet pussy lips. Each time he touched her
clit, she surged upward.
“Oh, bebé. You’re so
fucking sexy.”
The sweet sentimental
endearment, coupled with such a crude word, sent her libido into overdrive. She
reached down and guided him to the opening of her vagina. “Please. Don’t make
me wait any longer.”
Yes I am away of how spicy and hot that excerpt is. And
believe me much of the Damian intro is, but its not all sunshine and rainbows.
Much of the story of each of the three main characters Damian, Marc and Adam is
hard and tragic. They have each been dealt with hardships in their lives that
make a reader want to reach up and hug them.
I think for me some of the more emotionally hard parts to
read were how they dealt with PTSD and the things that happened to them while
they were serving. But thankfully Adam and Marc have an idea that will save all
three of them from self-destruction. The book leaves us waiting and wanting to
know how their lives will change and improve. 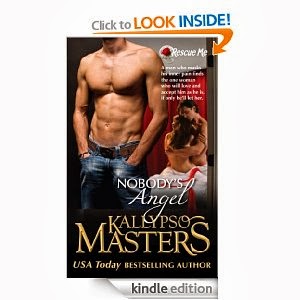