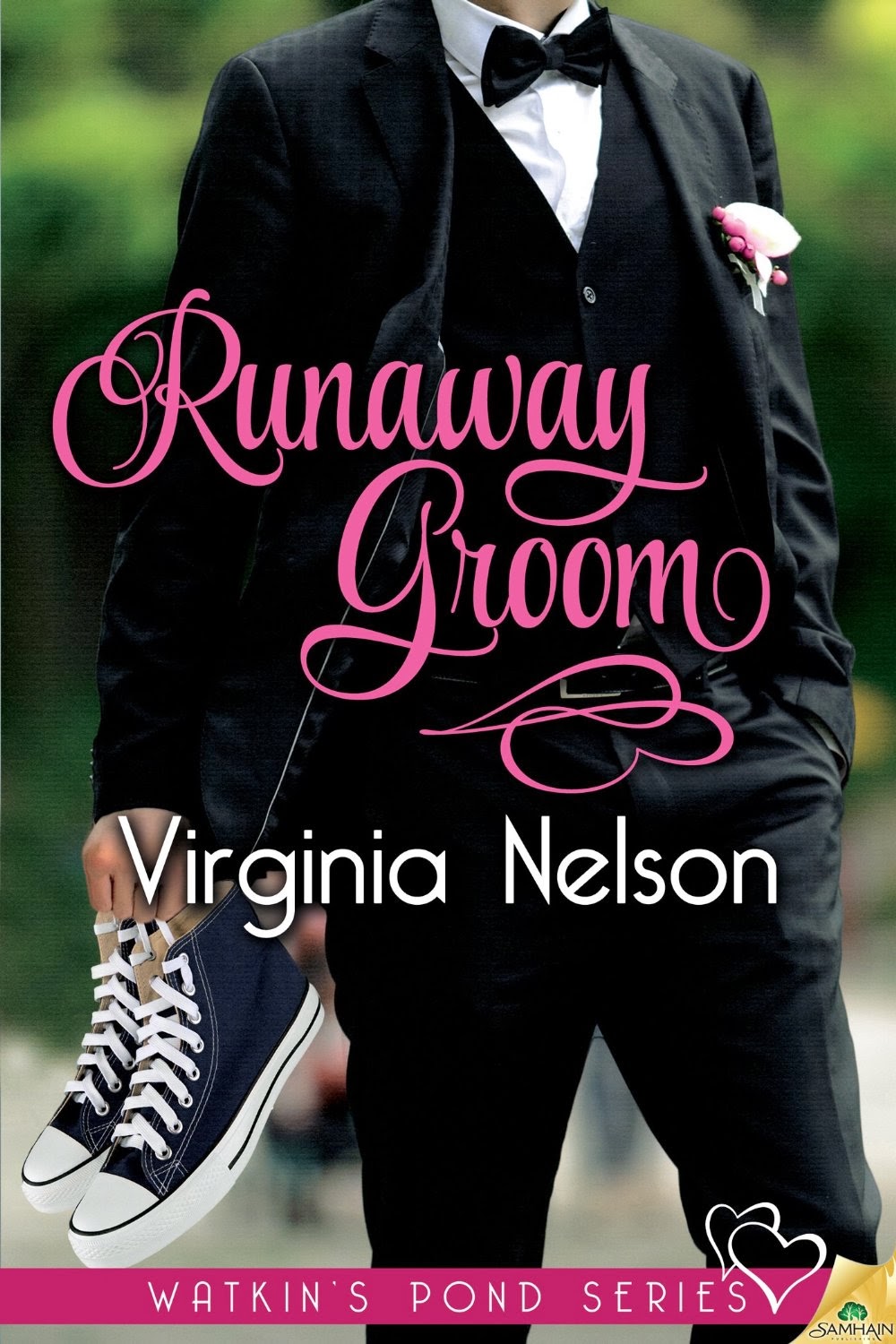 He’s ready and waiting. She’s wanting…but wary.
Runaway Groom
Watkin’s Pond, Book 1
Links
Amazon | B&N | Goodreads
The groom is back in
town.
Abigail lost her best friend years ago when he ditched her
at the altar like a loaf of stale bread. Now he’s back and determined to do
whatever he has to—even lie, apparently—to get under her skin. Although he
makes her hormones rev to life in a way that no one has since he left, she is equally
determined not to fall for his boy-next-door charm.


His bride-to-be is
somewhat reluctant.

Braxton Dean was too young and stupid to know better when he
walked away. Years of trying to fill the Abby-shaped hole in his heart have
left him empty, and now he’s going to win back his girl—or get over her. But
first he needs answers. Particularly why she never responded to any of his
letters.


It might take a whole
town to make this wedding happen.

With the help of their friends, the two battle it out. The army?
An entire town of busybodies. The prize? Happily ever after.
Warning: Contains
indignant old ladies, steamy sex (but not with indignant old ladies), seduction
cake, and condom bouquets. Yes, we went there.
Enjoy the following excerpt for Runaway
Groom:
July 7, 2005


I’m sitting in a diner
in the desert. The sun peeking over the mountain lights up everything in these
reds so bright they almost hurt the eyes. You’ve never felt a hot like this,
all dry, nothing like the days that we went swimming over at Watkin’s pond…


I don’t really know
why I’m writing you. I don’t have answers and right now you probably want them.
I just know I couldn’t do it.


I miss you though.


Love, B
Knuckles white, Abigail put her beat-up Ford Focus in Park,
and glanced at her best friend. “I can’t do this.”

“Pussy.” Applying a coat of lipstick to her lush red lips in
the mirror, Carnie shot her a glance. “You can do this. It isn’t like you’re
about to face a firing squad. It’s just a bonfire.”

Shoving her hand through her short, pixie-cut brown hair,
Abigail blew out a frustrated breath. “I would rather face a firing squad. If
you ditch me to go running off with the new boyfriend…”

Carnie gave her a dirty look, tucking her red hair behind
her shoulder. “I would never do that. I know how bent out of shape you get
every time we go anywhere that Braxton might be. Really, though, it will be
fine.

The crap happened a thousand years ago. You’re adults now.”


Abigail didn’t feel like an adult. She felt like the
rejected teenager even thinking of Braxton Dean.

It didn’t help that he’d become sexier with age.
Heartbreakingly handsome, Braxton made her thighs clench with just a glance. She
needed to remember the pain and humiliation rather than how it felt to be
pushed into a bed by him. Better to remember the chest-constricting, blinding
terror when he’d ditched her and vanished rather than remember his face a mask
of unleashed passion and his green eyes wild with need. The former would keep
her knees together.

The terror of that time—it wasn’t something she shared with
anyone, not even Carnie.

Remembering gave her the strength she needed to peel her
fingers from the wheel. “You’re right, of course. I can do this. No big deal.
We’re both more mature now. He probably won’t even say a word to me.” The last
came out a bit hopeful, even to her own ears.

“Yeah, at his birthday bonfire, he isn’t going to say a word
to the woman he dated for years and ditched at the altar like a loaf of stale
bread. Really, Abs, you need to get pissed off rather than feeling pissed on.
You’re totally the injured party here.”

“He had his reasons. I’m sure he did.” Why was she defending his dumb ass?

“What reason could be good enough for that grand act of
douchebaggery?” Carnie raised one well-plucked brow at her. “Besides, these are
our friends. You need to remember why
we’re here. He took off. He stayed gone. This is our town. You’re going to walk
in there and show him what he is missing. Rub in his face what he can’t have.”

“I don’t know. He really wasn’t a jerk…not most of the
time.”

“Let’s just go find Mike and the crew, and have a good time.
All of our friends from high school are here and it’ll be good to catch up with
them.”

Nodding, stomach still a bit of a knot, Abigail opened her
door and stepped out into the muggy Ohio night. Stars hung like tiny lanterns
above the recently mowed field and the sound of laughter carried on the breeze.
The bonfire, a huge conflagration, was surrounded by what looked like hundreds
of folding chairs, coolers and other party miscellany that beckoned Abigail
onwards. Who knew? Maybe she would meet someone new and end up being really
happy she wasted the extra five minutes to make sure everything was shaved and
neat?

Carnie strode with her usual impulsive bravery into the
melee. Abigail stuffed her hands in her jeans and resisted casting her head
down to avoid any stares that might be coming her way. Instead she held her
head high, but refused to meet anyone’s eyes. In small-town Ohio, everyone knew
she hadn’t seen Braxton since that fateful day when he left her standing,
flowers in hand, waiting for a runaway groom. Everyone knew that instead of
marrying her, Braxton—golden boy and football hero—ran off to parts unknown,
and she’d neither heard from him nor caught a glimpse of him when he’d come to
town until a few weeks ago. He only returned home now to help his father with
his tool store after his father’s stroke made it hard for the old man to get
around like he used to.

Everyone watched to see how she’d handle it.

She wouldn’t give them a show to chew over for the next decade.
She’d act like it was ancient history, like she hadn’t spent years wondering
how a man could go from saying he loves her to leaving her to stand alone
against a whole swarm of gossips with nothing better to do than tear her to
shreds for being moronic enough to think he would stay.

She concentrated so hard on what she wouldn’t do, she slammed
to an abrupt halt against a firm chest. His
firm chest. Braxton. He smelled the same, damn him.

Even over the scent of wood burning, the ripeness of summer
and the bitter tang of someone’s spilled beer, she inhaled his soap, familiar
cologne and under it all, simply Braxton.

“Abby.” The word came out almost a plea. His eyes held a sad
look she quickly identified. He pitied her.
Double damn him. “Happy birthday.”

The sound of her slap rang out across the field. Even in the
flickering light from the bonfire, her handprint marked his strong jaw and she
couldn’t ignore the pleasure it gave her. Silence seemed to spread across the
night as he touched his cheek. Her mouth hung open, shock rippling through her
as his gaze locked on hers.

“I deserved that.” The timbre of his voice seemed to stroke
across her skin, stirring up a potent cocktail of emotions—lust, love, fury and
pain. The worst part was disgust at herself for feeling anything.

Instead of arguing with her, which almost would have made
her feel better, like it meant something to him, he simply nodded. “Wanna go
somewhere to talk?” 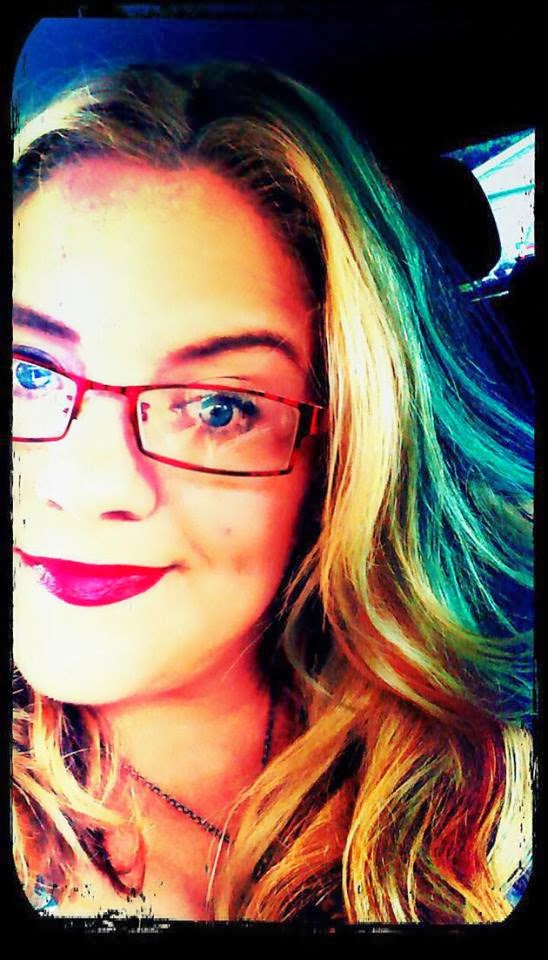 Virginia Nelson believed them when
they said, “Write what you know.” Small town girl writing small town romance,
her characters are as full of flaws, misunderstandings, and flat out mistakes
as Virginia herself. When she’s is not writing or plotting to take over the
world, she likes to hang out with the greatest kids in history, play in the
mud, drive far too fast, and scream at inanimate objects. Virginia likes
knights in rusted and dinged up armor, heroes that snarl instead of croon, and
heroines who can’t remember to say the right thing even with an author writing
their dialogue. Her books are full of snark, sex, and random acts of
ineptitude—not always in that order.
Links
Website | Blog | Facebook | FB Author | Amazon
| Pinterest | Tumblr

Adri’s Review:
Oh how I loved this book… Let me just start off by saying
that Virginia Nelson did an excellent job of bringing us the emotions that can
only be felt by someone who’s loved and lost and is weary of giving the person
who hurt them a chance. But the overall feel of this emotion I had during this
story was laughter…
Braxton left Abby ten years before
at the altar, but it was something he regretted the whole time. When he returns
to the small town where they grew up he does everything in his power to win her
back. Only problem is that she doesn’t believe he is being honest or if his
feelings are from guilt.
Abby felt like her life was turned
upside down and she was left having to be the one to care for her ailing
grandmother and other family members. At one point during the story Abby
mentions to her friend that she feels that if she would have gotten married to
Braxton her life might have not been the way it turned out. It gave the
impression that she also held a bit of resentment against Braxton for running
out on her.
One thing that I loved about the story
was the letters that are at the beginning of each chapter. And I would be lying
if I said I wasn’t yelling at my Kindle asking it where were the letters…
Getting a glimpse into Braxton’s feelings over the years to me were pure genius…
Now I can keep talking about the
book all day long, but then you wont have a reason to go off to buy it and read
it yourself.
Happy Reading…. Adri