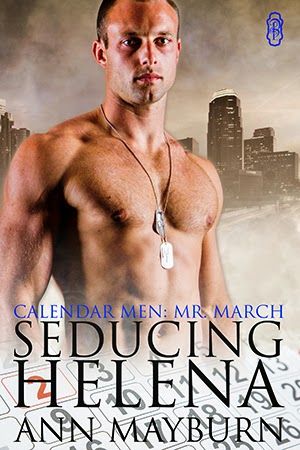 Supermodel Helena Flores didn’t plan to fall in love with her
Marine pen pal, but he’s funny, kind, and so hot she can’t resist.
Determined to see if Seth will like her for the woman she is on the
inside, she pretends her job in the fashion industry is behind the
camera rather than in front of it.

Seth Morgan fell in love with Helena’s words and mind. When he finds out
she’s a girl who can have any man she wants, he wonders what she could
possibly see in him. But this Marine is determined and plans to seduce
her so thoroughly, until all she can see is him and their
picture-perfect love.


Seth Morgan walked down the crowded concourse of JFK Airport to the
baggage claim area with his heart pounding in his ears. He was torn
between the desire to run to where Helena was supposed to be waiting for
him and the need to appear cool and collected. Though how any man could
remain calm when one of the most beautiful women in the world waited
for him was beyond Seth.

He made his way through the crowd, his six-foot-four height
making it easy to see above their heads, and scanned the bustling area
for Helena. Almost instantly he found her and everything, every cell,
every nerve, seemed to light up inside of him. If he thought she was
good-looking in her modeling pictures, Helena in real life just about
blew a circuit in his mind.

She stood a little back from the crowd, wearing a flowing white
summer dress that made her dark brown skin glow but did little to hide
her full breasts and the curves of her hips. Her shoulder-length hair
was pulled back from her face in a high ponytail and he longed to grip
it and use it to hold Helena still for his kiss. The gold bangles on her
arm glittered in the sunlight coming through the widows as she shifted
and glanced in his direction, ignoring the people around her taking her
picture with their phones or just plain gawking.

He paused, letting people walk around him as he took Helena in.
Seeing her in living color like this made their daily e-mails to each
other seem all the more improbable. When she’d first told him the truth
about who she was, he hadn’t believed her until he checked with his
buddy, Leo, and found out yes indeed, his pen pal was one of the most
desirable women on the planet. While he hated people lying to him, he
could understand why she had done it.

In hiding her identity, she’d allowed him to see her true self, a
brilliant and funny woman who’d stolen his heart. Now he needed to see
if the feeling was mutual. He wasn’t going to press it. If Helena seemed
uncomfortable at all, he’d insist on getting his own hotel room instead
of staying at her place like she’d asked him to. He still couldn’t
understand why someone as hot as her would want anything to do with him
but he’d be fucked if he was going to let this opportunity slip by.
Beyond that, he really did like her. She was honorable, smart, and kind.
At least she was in her letters.
Author Bio

With over thirty published books, Ann is Queen of the Castle to her
wonderful husband and three sons in the mountains of West Virginia. In
her past lives she’s been an Import Broker, a Communications Specialist,
a US Navy Civilian Contractor, a Bartender/Waitress, and an actor at
the Michigan Renaissance Festival. She also spent a summer touring
with the Grateful Dead-though she will deny to her children that it ever
happened.

From a young age she’s been fascinated by myths and fairytales, and the
romance that often was the center of the story. As Ann grew older and
her hormones kicked in, she discovered trashy romance novels. Great
at first, but she soon grew tired of the endless stories with a big
wonderful emotional buildup to really short and crappy sex. Never a big
fan of purple prose, throbbing spears of fleshy pleasure and wet honey
pots make her giggle, she sought out books that gave the sex scenes in
the story just as much detail and plot as everything else-without using
cringe worthy euphemisms. This led her to the wonderful world of Erotic
Romance, and she’s never looked back.

Now Ann spends her days trying to tune out cartoons playing in the
background to get into her ‘sexy space’ and hopes to one day be able to
use the bathroom without interruption from a kid, cat, or dog.

Ann loves to talk with her fans, as long as they realize she’s weird and that sarcasm doesn’t translate well via text.

Sarah’s Review:
Thanks to Ann Mayburn and Decadent Publishing for providing yet another amazing story!  The Calendar Men Series is a new one from Decadent and I am continuing with the monthly feature of each story.

Helena and Seth are characters that took being a penpal to a whole new level!  I love that Ann Mayburn utilized modern technology to get two characters to get to know each other.   I truly enjoyed reading how they connected through their emails and then when they finally met in person, their chemistry was combustible!