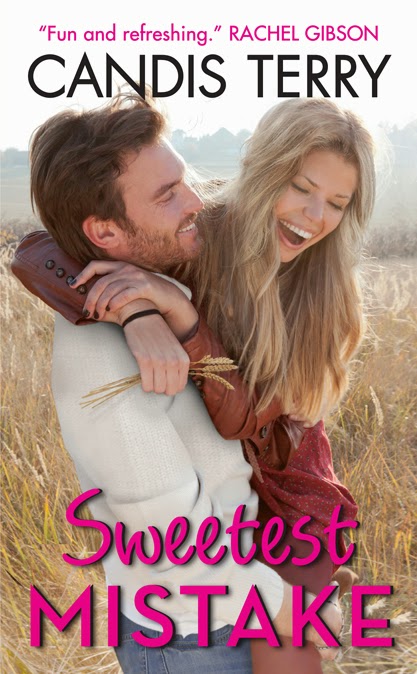 Firefighter
and former Marine Jackson Wilder has tough guy down to an art, but he’s learned
the hard way that promises were made to be broken. Abigail Morgan was once his
best friend, his first kiss, his first love, his first everything. He’d just
forgotten to mention all that to her and she blew out of his life. Five years
later, she’s back and he’s battling a load of mistrust for her disappearing
act. But for some reason he just can’t keep his lips—or his hands—to himself.

When her
stint as a trophy wife abruptly ends, Abby returns home to Sweet, Texas, and
comes face-to-face with Jackson—her biggest and sexiest mistake. Time and
distance did nothing to squash her love for the act-first-think-later stubborn
hunk of a man, and when he suggests they renew their old just-friends vow, Abby
realizes she wants more. She’d cut and run once. Could she do it again? Or
could she tempt him enough to break his promise?

Award-winning
author, Candis Terry, may have taken 22 years to become published, but since
2011 she’s made up for lost time with the release of her new Sweet, Texas
series and The Sugar Shack Novels—small town
contemporary romances rich with memorable love stories, quirky characters, and
tons of fun. Reviewers have called her books delightful, charming, and
clever. Her short story in the anthology FOR LOVE AND HONOR was awarded a
STARRED REVIEW by Library Journal Reviews and was called “Uniquely satisfying.”

Born and raised near the sunny beaches of Southern California, Candis
has made her home on an Idaho farm for almost 20 years. She’s experienced life
in such diverse ways as working in a Hollywood recording studio to chasing down
wayward steers. Only one thing has remained constant: Candis’ passion for
writing stories about relationships, the push and pull in the search for love,
and the security one finds in their own happily ever after.

When
not writing, Candis can be found camping and ATVing through the beautiful Idaho
wilderness with her family.

Sarah’s Review:
Thanks to my friend Rach for gifting this book to me so that I could review it for the blog!  I appreciate your generosity more than you know.  Your support of this blog is greatly appreciated.


Jackson Wilder was great in “Anything But Sweet” and I was excited to read this one.  Boy, Jackson did not disappoint!  The alpha male, stubbornness, firefighter and Marine persona that Jack has is just part of who Jack is.  Jack playing with his daughter Izzy is so swoon worthy, especially when he let Izzy play make up with his face.


Watching these two friends turned lovers had me laughing at times, crying at times and wanting to smack Jack!  I love these two.