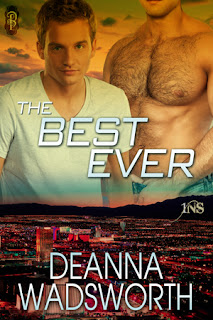 Jason Lewis is a self-proclaimed nerdy guy who hates his red hair. Bullied most of his life, at 22 social situations still
make him awkward. On a trip to the World Video Game Expo in Las Vegas,
Jason decides to enlist the help of Madame Eve in his failed romantic
endeavors. While at the con, he runs into sexy, professional baseball
pitcher Blake Huntington, the guy he tutored in high school. Blake
invites him to a party and after hanging out with his high school crush,
Jason begins to regret booking his 1NS “encounter” later that night.
But Madame Eve may have planned the best night ever.


From the corner of his eye, he noted the sheets on the king-sized bed
had been turned down and a strip of condoms lay on the nightstand next
to a bottle of lube.

Suddenly, the illicit nature of the whole evening hit him. Sweat
broke out on his skin. Shit, why had he bothered to shower? He took a
quick whiff of his pits. Thank God, his deodorant was still on the job.

Where was this guy? What if he turned out to be old? Who hired
this kinda service anyway? And who used an alias as lame as John Smith?

Suck it up! You can do this. He may have been a gangly nerd in high school but he’d taken up karate, per Blake’s suggestion—dammit!
Stop thinking about professional baseball players you’ll never stand a
chance with. This is about going after what you want!

The bathroom door opened, and he smoothed his shirtfront, trying to be presentable.

A man walked out, towel-drying his hair.

Jason sucked in a sharp breath, and his dick stood up and took
notice of the big, athletic body, fresh from the shower. Tanned and
muscular. Water streaked furrows into his perfect layer of chest hair. A
skimpy towel hung from narrow hips, a solid thigh peeking out from the
side, but his face remained hidden.

“Sorry, I kept you waiting,” the man said, slow and seductive. “I figured, why waste time getting dressed.”

Then he dropped both towels in a practiced maneuver, standing
there in all his naked glory. Jason’s gaze traveled from his feet, up
those long legs, past a thick cock and over a perfectly chiseled
abdomen.

When their eyes met, the man’s sly grin faded in an instant. He gasped, hazel eyes wide.

Jason let out a gasp of his own. “Blake!”

Thanks to Decadent Publishing and Deanna Wadsworth for giving me the chance to read and review this story.  I am not normally a big reader of m/m stories, but something about it this story caught my attention and I wanted to read it.  I was not disappointed at all.


I laughed at the hashtags that appeared through the book.  It fit the story perfectly.  I thought the way they were reunited was really perfect for the two of them. When they got to the 1NS portion of their night, I was glad that they finally realized that they were actually meant to meet back up.  That Madame Eve has a way with getting timelines to mesh perfectly!


Even though I am not a huge reader of m/m stories, this story is one that I would recommend.