REVIEW: THE ILLICIT LOVE OF A COURTESAN BY JANE LARK 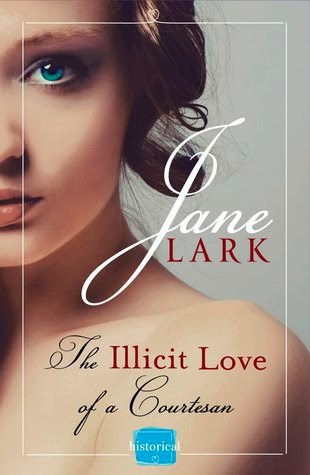 Synopsis
Trapped under the reign
of a cruel keeper, Ellen Harding longs to be free. Under his
oppression, her soul and conscience have died while her body lives on,
fulfilling his dissolute desires. She is empty—a vessel—deaf to the
voice of morality and blind to shame.

When her eyes are drawn to a
beautiful man for no other reason than his looks, she imagines what it
would be like to escape her chains for a night by giving her body to
him.

But Edward Marlow is kind and gentle when he touches her,
and her subconscious whispers, this man could be her salvation. Yet how
can he help her when she has secrets which prevent her freedom?

Edward
is restless, lonely, and a little angry with his lot in life—it is his
only excuse for being drawn to another man’s mistress. The woman’s dark
hair and pale eyes are striking, and he cannot take his gaze off her
while she watches him over the top of a fan with an illicit intent in
her eyes.

Once he’s known her, he cannot forget her, and once
he’s seen the evidence of her supposed benefactor’s brutality, he wants
to help her. But how can he when she will not run any more than she will
speak of her past?

When a desperate Ellen finally relents and
shocks Edward from his sleep, he doesn’t hesitate, he helps her flee. He
just doesn’t know he’s running headlong into the secrets of her past.


Erin’s Review
Jane Lark does a beautiful job telling this story. It has a bit of everything, a dashing hero, a damaged heroine, a secret she must keep and a man that will do anything to make her his.
There is so much more to Ellen than meets the eye. She is forced in to her lot through the most heartbreaking of circumstances. Left alone with no one to turn to, she did the only thing she could to survive.
Her keeper is a cruel man. He does not love her. He keeps her in a guilded cage to bring out only when he sees fit, not knowing the woman underneath the facade she portrays.
Edward Marrow is the responsible one. He has been keeping up with his brother’s estates ever since his trip gallivanting across the globe and Edward is a bit angry. Ellen draws him in and he can’t get her off his mind. He wants her, all of her and damn the consequences.
Ellen has tried to protect her secret for so long she finds it hard to trust Edward, but she is left with no choice. Together they face what appear to be insurmountable odds to fight for those they love. And the odds are many, from the scathing eyes of Edward’s brother to Ellen’s formidable father. Ellen is character that you will fall in love with. You don’t feel pity for her, you want to avenge her lot in life. Can she win Edward’s family over? Can they forget her past and move on? And can her and Edward finally have the happiness they so truly deserve?
One has to read to find out, and uncover all the secrets and intrigue that surround our couple as they forge a new beginning.