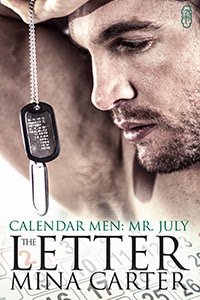 Ex-SAS Sergeant Rick Week’s career ended in a hail of bullets
and the death of his friend Billy. After months of recuperation, Rick
can finally fulfill a promise he made to Billy; deliver a letter to his
girl. Simple. Maybe….

Hattie Jameson lost the man she loved. KIA. Eighteen months later, she’s
trying to move on. Then a sexy-as-hell Scottish soldier turns up on her
doorstep—the man who’d been with Billy when he’d died. She shouldn’t
find him attractive. Not at all….

Fortunately, fate, and Billy, have plans to bring the reluctant lovers
together. Can Rick and Hattie get past their grief and let love in?

Hattie’s hand was already out, ready to shake, but when he spoke, she faltered. Rick Weeks.
She knew that name. She shouldn’t, but thanks to one of the men in
Billy’s squad she did. Rick Weeks…Sergeant R. Weeks. The soldier who’d
carried her Billy back into base while both of them were badly wounded.
Billy had taken his last breath seconds after the gates closed behind
them.

Faced with the man who’d been with Billy when he died, she lost her ability to speak, or even think.

From what she’d been told, Billy’s squad had been ambushed in one
of the nearby towns. Scattering, they’d been forced to take cover in
the ruins. Insurgent activity in the area meant the base couldn’t send
out a rescue party. She’d never been able to get an answer on why the
British were in the area. But, according to the short letter she’d been
given, a British soldier had found Billy injured and taking shelter in a
building on the edge of town.

Together, Rick and Billy waited through the night then made a
break for the base at dawn. They’d almost made it, the base in sight,
but a sniper opened fire. Billy had taken the brunt of the fire, bullets
riddling his slender frame to slam into the soldier who carried him—who
continued to carry him, running for the safety of the base. The British
soldier was hailed as a hero and Billy came home in a metal box.

Now, that soldier—Rick Weeks—stood in front of her, the name given a face, and she couldn’t think of a thing to say. Except….

Mina Carter was born and raised in Middle Earth (otherwise known as the
Midlands, England). After a slew of careers ranging from logistics to
land-surveying she can now be found in the wilds of Leicestershire with
her husband, daughter and a cat who moved in and never left.

Suffering the curse of eternal curiosity Mina never tires of learning
new skills which has led to Aromatherapy, Corsetry, Chain-maille making,
Welding, Canoeing, Shooting, and pole-dancing to name but a few.

A full time author and cover artist, Mina can usually be found hunched
over a keyboard or graphics tablet, frantically trying to get the images
and words in her head out and onto the screen before they drive her
mad. She’s addicted to coffee and Nutella on toast.

I have to say that this story was one that left a lasting impression on me.  I have a soft spot for stories that involve the military.  There are so many things that I love about this story but if I go into detail, I will spoil the story.

I love the Rick followed through on Billy’s dying wish and brought a letter to his widow, Hattie.   Rick and Hattie don’t expect to fall in love with each other.