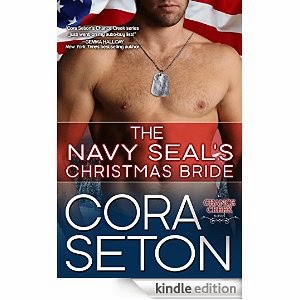 It’s Christmas time at Crescent Hall, but don’t expect expect peace, harmony and goodwill among men. When Mason Hall and his wife, Regan, invite their friends to stay for the holidays, sparks fly in an epic battle of the sexes, military style! Navy SEAL Dan Hemmins goes head to head with soldier Sarah Metlin to prove once and for all that woman can’t possibly qualify for an elite branch of the military, but when Sarah proves she’s not just one of the most qualified warriors he’s ever met, she’s also one of the smartest and sexiest, too, he’ll do whatever it takes to get close to her, even if he has to challenge her to another contest…or three…or five! The Navy SEAL’s Christmas Bride is a Heroes of Chance Creek novella, and has also been featured in the SEALs of Winter box set.


First of all I would like to thank Cora Seton with providing us with a copy of this book so that we could bring you this review.


Cora Seton like always is fantastic and makes the fact that these characters have such deep connections so quickly feel seamless. I really enjoyed Dan and Sarah’s story, even if Dan can sometimes come off as an ass, but then again Sarah proves to be quite competitive herself. I look forward to learning more in future books on what happens with these characters. On a side note, the fact that we got a little glimpse of some of her characters, not only the ones we have already met but also the ones that still have not come out yet is such a treat. Heck we even get to see a small glimpse of the Chance Creek Cowboys.