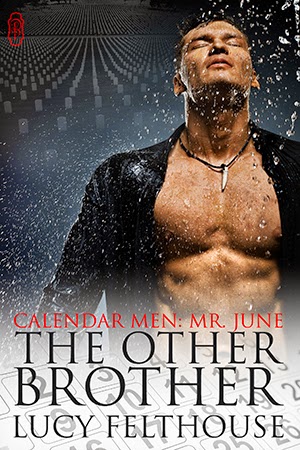 The Other Brother
Calendar Men – Mr. June
Lucy Felthouse
Photographer Melodie Carr moved to New York City to escape the
death of her fiancé in Iraq. Struggling to come to terms with it ever
since, she sees a call for photographs for a calendar to benefit family
members of fallen heroes, and is eager to help out.

Unfortunately, she doesn’t know any men that fit the profile. Not until
Patrick Brogan—her late fiancé’s brother—turns up in New York. Seeing
him brings up all kinds of memories, but she’s determined to push them
aside and persuade him to take part in the calendar. But is that all
he’ll take part in?

“Hi,” a male voice said. “Are you Melodie? Melodie Carr?”

“I am.” A caller looking for her? Had she ordered something and forgotten about it? “Who’s calling?”

“Patrick….” Speechless, she laid a hand on the wall to steady
herself as the bottom dropped out of her world. Evidently, running to
New York—albeit under the pretense of a good career move—hadn’t been
enough. Her past still followed her, still tried to flood her with
reminders of what she’d lost.

Damn, the man’s persistent. She never should have admitted
her identity before asking his. She could have told him he’d gotten the
wrong place and sent him away.

Not that it would have worked. There was only one place he could
have gotten her address—her parents. And no way she’d get away with
giving them a fake one. Plus, she did happen to be one of the few
residents who had a name next to her button on the panel outside.

Damn her parents! Damn her late fiancé’s brother. Why couldn’t they just leave her alone?

A moment ago she’d been craving a familiar face, and now one
waited to get in. She should let him come up—it wasn’t his fault his
brother had died, after all. He’d been as devastated as her.

She pressed the button. “Come on up.”

Sarah’s Review:
Thank you to Decadent Publishing, Joanne Kenrick and Lucy Felthouse for creating this amazing series and the opportunity to have a new book boyfriend each month!   I was hooked right from the beginning and wanted to feature these great stories each month and thankfully Decadent Publishing was on board!  As soon as I saw the cover for this story, I knew there were be a sad story as part of the overall story.  Then I read the blurb and knew that I needed to read this.


Right from the beginning I like Melodie’s character.  Her loyalty to her deceased fiance is something that is admirable.  When Melodie has a surprise visitor in the form of Patrick Brogan, her late fiance’s brother, all that Melodie has become used to gets flipped upside down.


Since this is a short book, I am not going to say much else, but it is a great story about love conquering in death.  At least, that is my take on it.