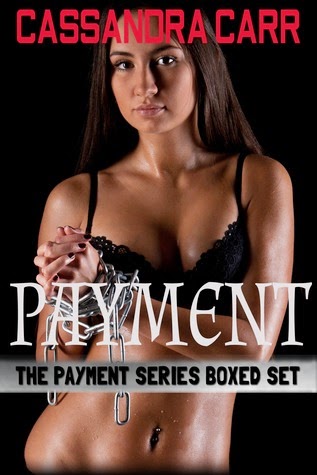 The Payment series (Prized, Possessed, Purgatory)-
Catrina
Carter is in over her head. Way over her head. She’s in debt and, short
of bankruptcy, which wouldn’t happen fast enough to pay the creditors
nipping at her heels, Catrina has few choices. Eviction is coming any
day, and even though she traded in her great car for a “more affordable”
model, it’s about to be repossessed too. Catrina goes to Debt
Management Associates, or DMA, for help.
The cost for DMA’s help is
something she never thought she could pay, but out of options, Catrina
agrees to serve a man who pays her debt in full, and begins training in
how to please him. Jared. Her new benefactor. He is tasked with
helping Catrina get her life back on track, in addition to taking his
pleasure with her and ordering her to oblige friends, colleagues, and
even total strangers sexually on his whim.
When Catrina leaves the
DMA program after her one year term of service, will she be able to keep
the lessons Jared literally spanked into her topmost in her mind, or
will old habits rear their designer heads?

Prized: The Payment series, part 1
After
agreeing to a one-year term of service with a benefactor who can pay
her debt, Catrina Carter begins training in how to please a man. But
will a benefactor be willing to spend such an astronomical sum—one
hundred and fifty thousand dollars—just to have her for a year? She’s
about to find out.

Possessed: The Payment series, part 2
Jared,
Catrina’s “benefactor”, has agreed to pay off her debt in exchange for
one year of service to him. In addition to taking his own pleasure with
her, Jared offers Catrina to friends, colleagues, and even total
strangers on his whim. But it’s not all fun and pleasure for Jared. As
part of the agreement, he’s tasked with helping Catrina get her life
back on track. He’ll succeed even if he has to spank every piece of
financial information into her, and he finds he just might have to do
that.

Purgatory: The Payment series, part 3
Catrina has
finished her year-long term of service to Jared, her benefactor, who
paid all her debt off. Now she’s on her own again. Will she be able to
keep the lessons Jared literally spanked into her topmost in her mind,
or will old habits rear their designer heads?

*I included the links to the box set. Each book can be purchased separately. Prized is listed on Amazon right now for $.99 and Possessed and Purgatory are listed for $3.49

Erin’s Review
I’ve read quite a few of Cassandra’s books and this by far was her darkest. It was intriguing, erotic, and really got me thinking, what would I  do in that situation? And I have to answer that with a resounding….I have no freaking idea!
Catrina really gets herself in to some trouble financially and seeing DMA as her only solution, she agreed. I got to give the girl credit, I probably would have bailed. Well, maybe.
This is by no means a conventional love story. Catrina is paying a debt, one that Jared repeatedly reminds her of. I thought he was quite the jerk at first but after a while, I understood why he was doing what he was doing. Teaching someone responsibility is a big thing, and Catrina has a BIG problem.  She’s a bit sassy with him at times and it doesn’t go over well with him. She is there to learn, he is there to teach her.
Over time the two develop a relationship that is anything but conventional but you start to see a bit of the man that Jared is. He truly wants the best for her and wants her to see the error of her ways. If you are looking for a conventional love story, this is not it. It’s dark, it’s erotic and there are sexual situations that will make you squirm in your seat. There is an attachment between Catrina and Jared, but I wouldn’t necessarily call it love. It’s a mutual respect with a bit more, kind of hard to explain without giving things away. I’m not going to tell you if Catrina learned from her year under Jared’s teachings, that would be much too easy. I can say though, I had a different view of Jared at the end than I did in the beginning.
Highly recommend these books. I like twisted and this is definitely twisted! Now go buy this before I send all of you to DMA and make Raoul give you training for not listening to an awesome recommendation.