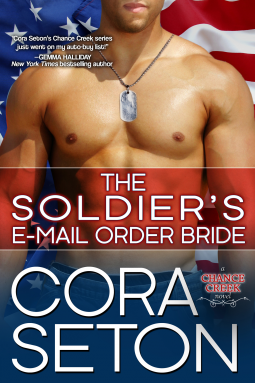 Staff Sergeant Austin Hall has a brilliant record in the Special Forces—except for one disastrous decision that cost his best friend’s life. Now he’s heading home to Chance Creek, Montana, where he’d like to spend the rest of his days in the obscurity of his family’s ranch. Too bad Great Aunt Heloise won’t hand the ranch over unless all four of the Hall brothers marry and one of them produces an heir within the year. Austin is too broken to marry for love, so he places an online ad for a fake wife. What could possibly go wrong?
Ella needs to leave Hollywood—fast. It’s bad enough another actress stole her fiancé—on national television. Now she’s ruined her comeback by decking her ex on a morning talk show. Pursued by paparazzi, Ella needs a new life, a new name and someplace to hide. When she reads Austin’s ad for a stand-in wife, she knows she can act this part perfectly. To the rest of the residents of Chance Creek, they’ll be a happily married couple. In private, they’ll just be roommates. In a year when she’d old news and the Hall brothers secure the ranch, she and Austin will quietly divorce and she’ll go on her way.
Or will she?
Austin’s already finding it hard to remember his promise never to love again. Ella’s finding it hard to keep her hands to herself. But when they’re asked make a back-up baby, Ella realizes she may have stepped into a lifetime role.
Can this pretend marriage go the distance?
ADRI’S REVIEW:
Thank You first off to NetGalley for providing us with a copy of this book so that we could bring you this review.
Now I think by now many of you know that I am completely in love with Cora Seton and all her Chance Creek friends, but in book 2 of this series she has found a way to make me fall in even more love with this little part of the country. Not only do we get so much of Austin and Ella’s fantastic story but also a bit of what is going on with other characters from her other series the Cowboys of Chance Creek.
Though Austin and Ella originally chose to go through with this marriage for different reasons, they both find that they quickly learn to not only fall in love but that they couldn’t be happier if they’d planned on it. The chemistry between them quickly changes the fact that they’d taken sex off the table and planned to live platonically. The fact that they both work hard to bring their little piece of Crescent Hall back to life, helps forge their relationship into more.
I can honestly say that I can’t wait until I get more of these books as I am completely hooked on Chance Creek and all its inhabitants.
Happy Reading… Adri