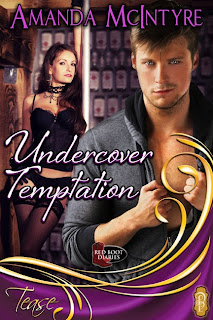 Cat Madsen left her hometown ten years ago, escaping to Vegas
with hopes of becoming a famous showgirl, but those dreams evaporate
when she finds out that the owner of the club she pole-dances at also
dabbles in drug trafficking. Now, using her ailing father as an excuse
to return home to the town that rejected her, Cat is back with a renewed
determination to prove her worth. But her tarnished reputation may
prevent her from building a future among small-town attitudes.

When an undercover assignment lands Detective Reese Jamieson in the tiny
town of Sweetwater, he is skeptical it’s a hotspot for anything. Then
he gets his first glimpse of the ex-Vegas showgirl who runs the new
pole-dancing workout studio. Reported to be a hometown gal with a
checkered past, she is considered the prime suspect to front a drug
ring, but he begins to wonder once someone threatens the beautiful
woman’s life and business. Reese struggles to keep things professional.
When things become personal, Reese must risk everything, including Cat’s
trust, to protect her from the past.


He arrived a few minutes early, noting the lone baby-blue F-150 in
the gravel lot. The sun sat like a red fireball on the horizon, casting
long shadows across the parking lot. He got out of his car and dropped
his bag in the trunk, squeezing the automatic lock on his keys. He took
his time walking to the front door, taking in the solitary light pole at
the driveway entrance, the sagging overhang of the front porch, and the
sputtering welcome sign missing its last vowel. As he got closer, he
heard the thump-thump of sensual bass coming from an exceptional
sound system. The wicked beat caused goose bumps to rise on his flesh
and thoughts he shouldn’t be toying with to filter into his brain.

Yeah, she’s wild, our little Cat. The words of the man at
the bar slithered with a slow hiss into his brain, and he swallowed hard
to fight off the images it brought with it. The daily grind and
pressure of his job left little time for dating. Besides, he was getting
too old for the bar scene and though they’d tried, the younger guys on
the force had only managed once or twice to drag him to a dance club. He
paused at the front door, observing the weathered barn-board exterior.
In its day, it was probably a busy place—maybe even a place he might
have frequented. The door stuck, and he shoved his shoulder against it,
forcing it open.

The main room was empty, dark except for the tables and chairs
stacked to one side. Farther back beyond the bar was an area that
appeared to be a dance floor. It didn’t take long as he moved toward the
dim light to realize it was no ordinary dance floor. He stepped from
the shadows and halted in his tracks at the sight before him. It
resembled a silvery forest with at least nine—to his quick count—steel
poles positioned at spaced intervals across the room. Above, bare light
bulbs stuck out from sockets strung across the beams of the ceiling,
providing light to each of the stations. He wasn’t sure what he should
have expected, but this wasn’t it. The music grew a bit louder,
drawing his astonished gaze to a tenth pole set up in the middle of the
small stage at one side of the room. Above it, a single bulb housed in a
metal, industrial shade spotlighted the pole.

From the heavy black drapes hiding the backstage area emerged a
woman the likes of which Reese had never seen. Her long legs were
encased in skintight black Spandex that rode miles, it seemed, before
disappearing beneath a faded, cherry-red zipped hoodie. She gripped the
pole with one hand, letting it slide effortlessly as she dropped her
body to a squat position and let her body sway to the provocative beat.
She dropped her head back, her dark brown hair done up in a ponytail
swished back and forth. Her eyes were closed. Performing silently, she
obviously thought she was alone.

Thanks to Decadent Publishing and Amanda McIntrye for the chance to read and review this story.  This is from the Tease line that DP has out as well.  These stories truly fit their line name.  I was left wanting more with this story, even after the epilogue.


What I loved most about this story is that it could have happened in my hometown.  The small-town drama that everyone seems to know what everyone is doing, yet they truly don’t know what anyone is doing is so true.   I enjoyed watching Reese and Cat learn about each other, but then when Reese’s true job came out, watching Cat decide whether she could trust him.


This one is more difficult for me to review because if I say what I want, I will give the story away.