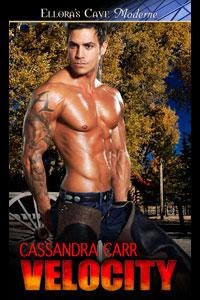 Paolo D’Allesandro has been living in his older brother Marco’s shadow.
But he’s getting older now and realizing he and Marco don’t want the
same things. He’s not sure what his next step is, but knows he needs to
quit riding to figure it out.
Savannah Harrington is a grad student working on a thesis about
adrenaline junkies. She’s joined the bull riders’ tour to study the men
and their motivations to willingly take part in a dangerous sport. Upon
meeting Paolo, they both feel an instant connection. She can’t stay away
from the sexy Italian and his mind-numbing skills in the bedroom, but
knows the relationship can’t last.
Both wish their circumstances were different, but Paolo doesn’t think he
has anything to offer Savannah, and Savannah doesn’t want to pressure
Paolo into another life decision that will make someone else happy, but
not fulfill him. As her time to go back to school draws closer, they
need to figure out how to get their highest score yet—in the game of
love.

Excerpt:
“Shall we go?”
He stood and helped her out of her chair. “After you.”
They
bade their goodbyes and Paolo helped Savannah to the car. “Apparently
caffeine makes me sleepy now,” she remarked. “That’s pretty horrible,
isn’t it? That I’m not even safe drinking pop?”
“I doubt you’re a horrible anything.”
Savannah threw a glance his way. “A silver-tongued Italian. Why am I not surprised?”
“Silver-tongued? What does that mean?”
“It’s a man who charms with words.”
“Oh,”
he said with an embarrassed shrug. “Marco is the one who women usually
throw themselves at. Though now that Natalie is around, they don’t
dare for the most part.”
“She seemed nice.”
“She is, except when one of the buckle bunnies tries to hit on her man.”
“Buckle bunnies?”
“Yes, the women who hang around the tour stops, hoping to sleep with one of the riders. We call them buckle bunnies.”
“Good to know,” Savannah said with a slow nod.
He started the car and she directed him to her hotel, just a few doors down from his own.
Making a quick decision, he pulled into a parking space and turned off the car. “I’ll see you to your door.”
“Oh, I’m sure I’ll be fine.”
“My madre would kill me if she found out I left a beautiful young woman alone to find her way.”
Savannah rolled her eyes. “Can’t have your mother murdering you. I need my research subjects to stay alive.”
Paolo
mock-shuddered. “Thank you for saving my life.” He helped her out of
the car and slid his hand around her small waist, finding he liked the
way she fit against him. When they arrived at her door, she pulled the
small key card out of her purse and turned to him.
“Thanks for seeing me home. Your mother would be proud.”
Maybe not if she saw me do this…
Taking Savannah’s face in his hands, he brushed his lips with hers. He simply couldn’t help himself. He had to taste her.
For
a moment she froze and he wondered if she was going to pull away and
slap him, but then Savannah melted into him and he guided her back
against the door, pushing a thigh between hers to anchor her there.
Moving one hand until it slid around the delicate column of her neck,
he tilted her head to the side so he could deepen the kiss. Savannah
let out a little moan and Paolo pressed in even closer, letting her
feel his erection. He hadn’t planned to take it beyond a kiss tonight,
but if she wanted him, there was no way he was going to refuse her.
Her
tongue slid into his mouth, caressing his with little swipes in and
out and he knew he’d better either get her inside or leave her alone
before he embarrassed himself.
Pulling away, he asked, “Should we go inside?”
“What?”
Paolo
indicated her key card. “In your room?” Savannah blinked a couple of
times and the heat in her eyes banked. The gentlemanly Italian manners
his family had taught him kicked in and he forced himself to step away
from her, clearing his throat. “Good night.”
“Yeah. Good
night. See you at the next event.” She pivoted and swiped her card
through the reader before giving him a little wave and disappearing
into her room.
Was she angry? Disappointed? Something else? He
had no clue. But he did know he was going to be forced to reacquaint
himself with his right hand before he’d be able to even consider sleep
tonight.
* * * * *
Savannah leaned against the hotel
room door after Paolo left. What had she been thinking? She’d wanted
to get to know the bull riders so they’d feel comfortable confiding in
her, but that didn’t mean she had to sleep with them. Paolo’s smooth
Italian accent and playful yet sexy mannerisms drifted back into her
brain despite her attempts to put him out of her mind, and her knees
went weak. Cursing to herself, Savannah pushed off the door and
staggered to the bed, flopping down with a groan.
Why had she
let him kiss her? It wasn’t as if it came as a complete surprise. She’d
allowed him to walk her to her door, after all. Obviously he’d taken
it as a sign she’d wanted to be kissed. Not that she hadn’t. The man
was gorgeous, from his rangy build to the dark hair and eyes that set
off full, sensual lips that, whoa, knew how to kiss.
Savannah
fanned herself, but it didn’t even begin to calm the raging inferno his
kiss had ignited. And when he’d thrust that powerful thigh between her
legs it had been all she could do not to hump the damn thing. His
strong arms had wrapped around her tightly, pulling her flush to his
body from chest to groin. She groaned again. Going back over the
incredible kiss wasn’t helping and she needed some sleep if she was
going to drive alone for hours tomorrow.

Erin’s Review:
I honestly didn’t think the Bull Riders series could have gotten much harder then Cassandra dedicated an entire book to Paulo. Sweet, soft spoken, hot, sexy Paulo. The chemistry between Paulo and Savannah is sizzling and you get a real feel for the urgency the couple has when faced with a short amount of time together. Both fall hard and fast.
Paulo proves that he is his own person but struggles with coming out from underneath his brother, Marco’s, shadow. His indecision shows his soft side. He doesn’t want to disappoint his brother. But can he really go on living a life that really isn’t his to live? Where he isn’t happy. And what does he have to offer the beautiful Savannah?
Savannah is a brainiac. She has her life all figured out. Smart, put together and rarely impulsive, then she meets Paulo. All reason gets tossed out the window. She is drawn to him and he makes her hot in ways she never felt possible. What the man can’t say in English, he sure makes up for in the bedroom! She tries not to get her hopes up about a relationship but the more time they spend together, the more she falls for Paulo. She is the perfect balance for him and helps urge him out of his shell and realize his own dreams and aspirations. But how can she say goodbye now?
I’ve said it before about these bull riders and I’ll say it again, I LOVE Paulo. Love him! There is something special about the youngest Italian brother and Cassandra does a wonderful job bringing Paulo to life. He and Savannah are so good together and their struggle to not only figure out their lives, but their relationship is real. I’m so sad to see the bull riders go, but can’t think of a better story to go out with. As George Costanza always says, Go out on a high note! Cassandra surely did with Paulo!