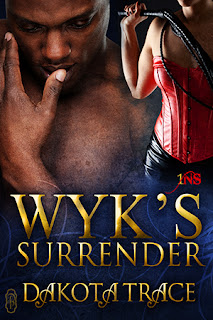 She wants to mark him and make him hers…

Mistress “V” lusts after her boss. She wants him at her mercy, begging
for her touch, but he only knows her as his very capable assistant
Venus. When an off-hand comment dashes her hopes, the sexy domme turns
to Madame Eve at 1Night Stand for help…

Living up to his father’s expectations has driven Wyk Havas to the edge.
His curvaceous assistant Venus wants to push him past those limits, and
he’s damn near attracted enough to try. But Venus’s preference for men
to submit to her threw him for a loop. Can a date from 1Night Stand show
him if he’s able to submit to a woman?

Can Wyk truly surrender to Mistress V’s pleasure or were they doomed from the start?

Distracted from her steamy FemDom story by a sound in the next
room, Venus cocked her head and set down her e-reader. Had her date
already arrived? If it was Madame Eve’s selection, the man was early,
really early. She enjoyed punctuality as well as the next girl, but
thirty minutes? She had specifically requested his presence at half-past
the hour. If the man couldn’t follow her orders, it would be a long
night for both of them. Swinging her bare feet over the edge of the
mattress, she continued to listen. When the sound came again, she
lightly trod to the inner suite door she’d left ajar.

She gazed into the sitting room. Her date had arrived. Standing
in the foyer, he kicked off his shoes and stripped off his T-shirt.
Irritation flowed through her, despite the fine condition of his dark
body in exercise shorts. His abs were well-defined, with a smattering of
tight curls below his navel.

Her eyes strayed away from his washboard stomach as he struggled
into the basic leash position she’d requested. Dropping to his knees, he
parted his thighs. Her mouth went dry when the material of his shorts
stretched tight over his upper legs and groin, cupping and accenting his
cock and balls. She’d never seen a sexier sight, but when he gave a
muffled grunt as he crossed his arms behind his back, she shook her
head. The over-anxious fool would end up with a pulled muscle or
something if he wasn’t careful. She entered the room with a sigh,
shutting the door behind her. The loud click had the man’s head swinging
up in her direction. Thankfully, she stood in the shadows cast by the
lone lamp on the far side of the room, because nothing in her life as a
Domme had prepared her for the reality of Wyk Havas kneeling before her,
his body exposed to her gaze. Her heart raced. She backed up until she
ran into the closed door.

This had to be a joke. Madame Eve couldn’t have set her up with
Wyk. There would be no way her boss would ever submit to someone like
her. She fumbled with the door handle, in an effort to escape, but when
he continued to kneel, not speaking, her nerves settled. Perhaps he did
want this. Other than his early arrival, he had followed her
instructions. Not to mention the key card he had to possess to enter her
suite. Even though it looked like this man was her date, she still
worried it was a sick joke on his part. More than once she’d cursed her
loose tongue when she’d accepted his offer for after-work drinks. After a
few too many glasses of red wine, she’d have spilled more than the mere
fact she was a Domme if it hadn’t been for the shocked look on Wyk’s
face. And my boss never treated me the same again

Erin’s Review:
Venus and Wyk are HOT! How lucky is Mistress V to turn the tables on her hot boss and have him do her bidding, for one night, and do whatever she wants? You envy V for being so lucky and desire Wyk for wanting to be everything for his Mistress.

Madame Eve, once again, has her hand in showing these two exactly what they want. V wants her boss, on his knees, and he wants V, in the worst way. He knows she is assertive, and Wyk finds out just how assertive on their date. These two are easily one of my favorite 1Night Stand couples. V is sassy and Wyk is just yummy, no other word for him. The sex is steamy and you got to love Wyk for trying the submissive thing. Goes to show he’s a man that will do anything for his woman. V is a lucky girl! And that Madame Eve……got to hand it to her for once again giving her clients more than they paid for!